I’ve become a London commuter for rhe day. Starting off by using ‘Shanks’s pony’ to get to Gipsy Hill station on the first leg of my trip to ExCel in the docklands.

Things have already fallen apart. Due to a points failure at West Croydon the 08:00 Southern service I’d planned to catch has been cancelled and the following 08:12 is delayed for unspicified reasons. Still, I’ve given myself leeway and it’s a beautifully sunny, crisp morning, so let’s see what happens…

A 4 car 455 finally arrive to take me one stop down the road to Crystal Palace. I had no problem getting a seat as most passengers were waiting for the following train to take them into the capital.

I always enjoy a visit to Crystal Palace, it’s a huge, labrynthine place whose fortunes have waxed and waned over the years. Now it’s very much on the up as a lot of money’s been spent restoring it and making platforms accessible (it has some mammoth staircases).

As well as having Southern services, nowadays the station’s the terminus of Overground services from Highbury & Islington in North London. I’m using one of them (the 08.36) for my next leg to Canada Water.

No time for blogging earlier, it’s been a busy day at Infrarail shooting pics of the speakers, networking and catching up with old friends. Here’s Transport Minister Chris Grayling taking questions after his keynote speech. 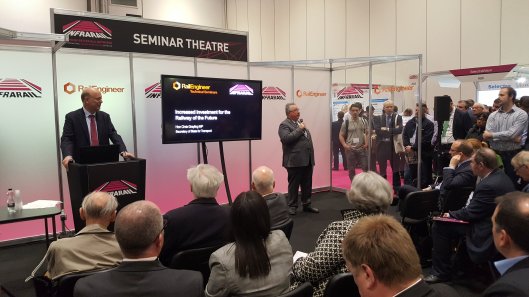 Now I’m on a Flybe plane from London City airport to Dusseldorf for phase 2. The great thing about flying from here is that the airport was only a 25 minute walk from ExCel!

Landed in Dusseldorf after a fascinating flight over London and the port of Rotterdam. You really appreciate its size from the air. Unfortunately I wasn’t able to get any decent pix, but here’s London from above, showing the Eurostar reception sidings at Temple Mills.

I’m expecting to have some interesting stuff to blog about this next week as there’s quite a bit of variety in my calendar. Tomorrow I head back to London in readiness for Infrarail, the 3 day railway trade show which is being held at ExCel in London’s docklands. I’ll be there for the opening but then I’ve got to hot-foot it over to London City airport in the afternoon as I’m on a press trip with Siemens to Dusseldorf, a group of us will be visiting their Krefeld plant to see the new Class 717 trains under construction. These trains will be replacing the vintage BR built Class 313’s operating services out of Moorgate and Kings Cross stations in London. After visiting the factory we’ll transfer to the test track at Wildenrath where we’ll have the opportunity to drive one of the new trains, so watch out for pictures on my Twitter account @paulbigland1 and website as well as keeping an eye out for the new blog.

Later that day we’ll be flying back to London, giving me the opportunity to spend a full final day at Infrarail before I head back up to Yorkshire.

There’ll be more variety later in May as I’m off to New York for a week. We’re going to celebrate my wife’s 50th birthday and meet up with some of her family, but I’ve arranged a bit of time to explore, so expect pictures of the New York subway as well as general cityscapes. I was last in the states in 2007, the camera technology’s changed a bit since then, so I’m looking forward to seeing what I can capture. By the way, here’s a link to the 2007 rail images.