Last month Eurostar invited the media to join them on the first train to run direct from London to Amsterdam, showcasing their new service which opens to the public on April 4th. Needless to say, there was a lot of interest, most UK newspapers and TV channels sent along journalists and film crews to cover the event which received wide publicity.

Our train was No 9114 departing St Pancras International at 08.31. The service was worked by one of Eurostars new 16 car, Siemens built e320 trains (No 4032 to be precise). If you’ve never been aboard on I can tell you that they’re very different from the older Alstom built trains as they’ve been constructed to take advantage of the fact they don’t have to run over the ‘classic’ British network, meaning they’re wider and more spacious. As they have distributed traction equipment rather than a power car at either end they also contain more seats and luggage space.

My group travelled in Business Premier aboard car 16, the leading coach. Here’s what it looked like inside. 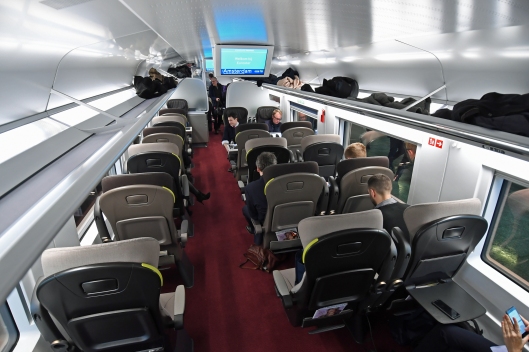 As you can see, the seating is 2+1 in a mix of bays and airline style. All seats have power sockets whilst the airline seats have large seatback tables, individual lighting, drinks holders and magazine racks. Here’s a look at some of the features (taken on an earlier trip). 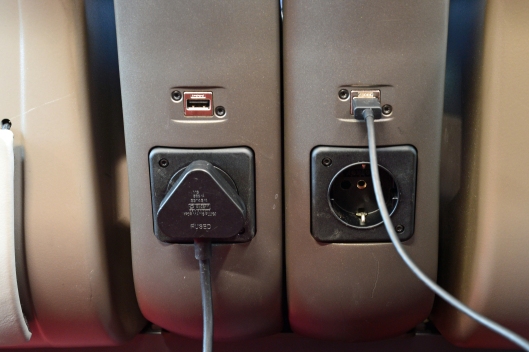 A mixture of British and European power sockets and two USB ports. 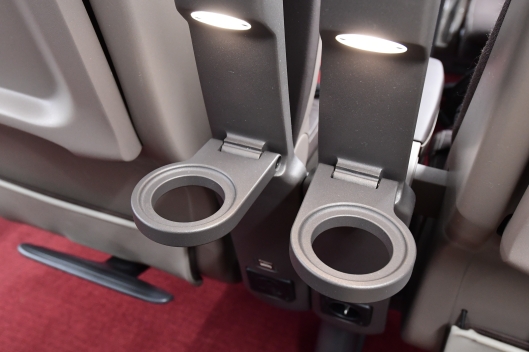 Drinks holders and individual lighting (with power sockets below) in airline seating. 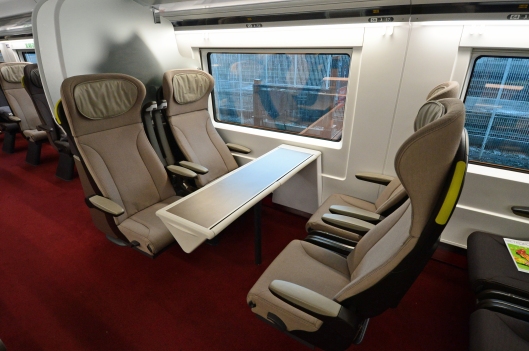 Bay seating around a table (which is retracted for ease of access). 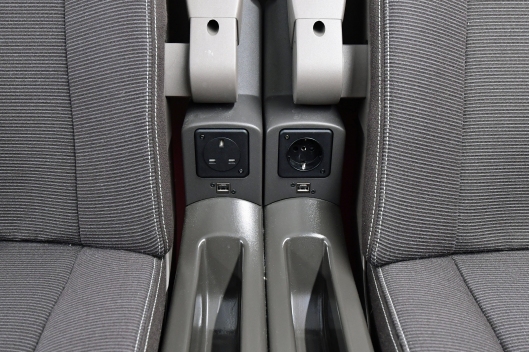 The arrangement for power sockets and USB ports in bay seating.

Here’s our train ready to depart St Pancras. As they’re 16 cars long (400m) it’s quite a walk from the back to the front! 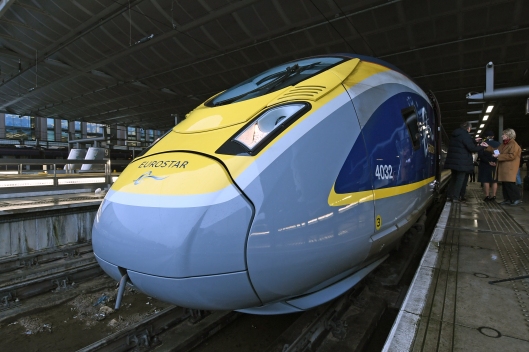 As you can imagine, Eurostar staff were as much a centre of media attention as the train itself with many of the crew kept busy before departure giving interviews or posing for pictures. 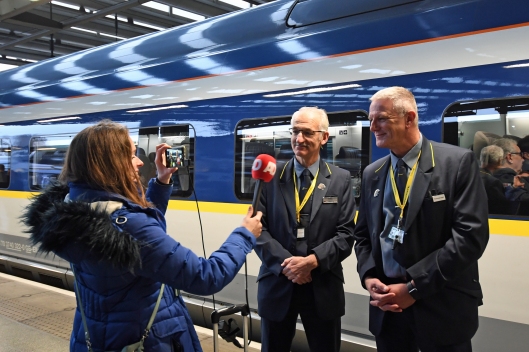 We left St Pancras spot on time and settled in for what was hoped to be a record-breaking run to Brussels. En-route the crew were kept extremely busy serving breakfast and chatting to passengers. 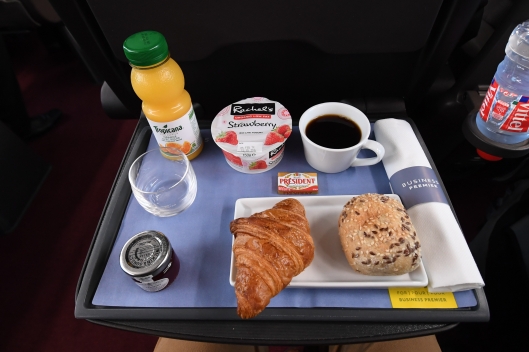 The beginning of breakfast, before the hot option arrives… 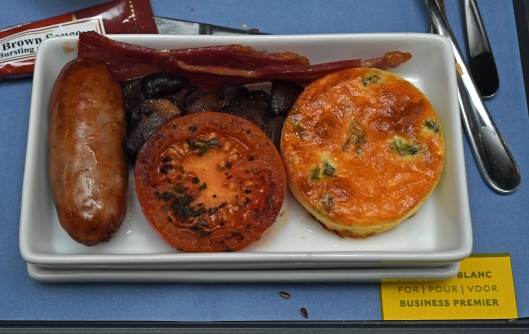 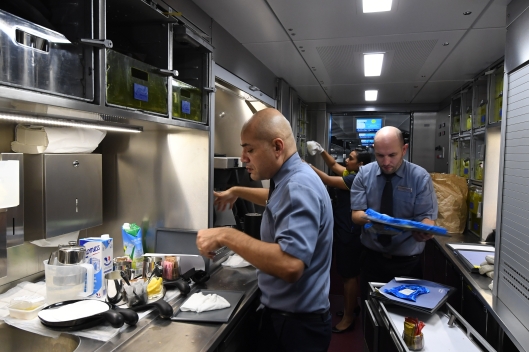 Service with a smile!

Once breakfast was out of the way the crew showcased some of the Dutch delicacies which would be available on the Amsterdam services. 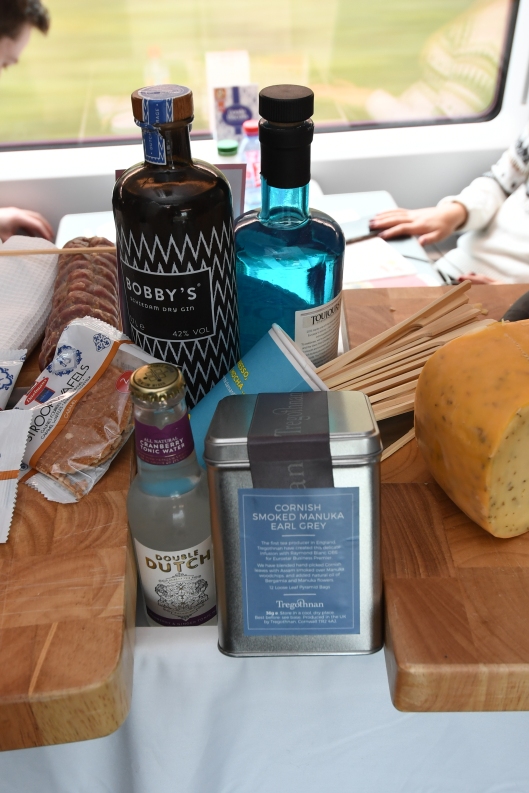 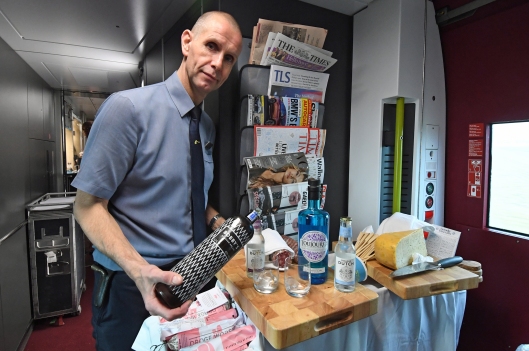 Maarten pours a sample of Dutch gin for our group to try.  I have to say that it went very well with a slice of the mature Gouda that was on offer!

Time flew and before we knew it we were entering Brussels just 1 hour 46 minutes after leaving London – and two minutes ahead of schedule. In celebration, guests were served champagne… 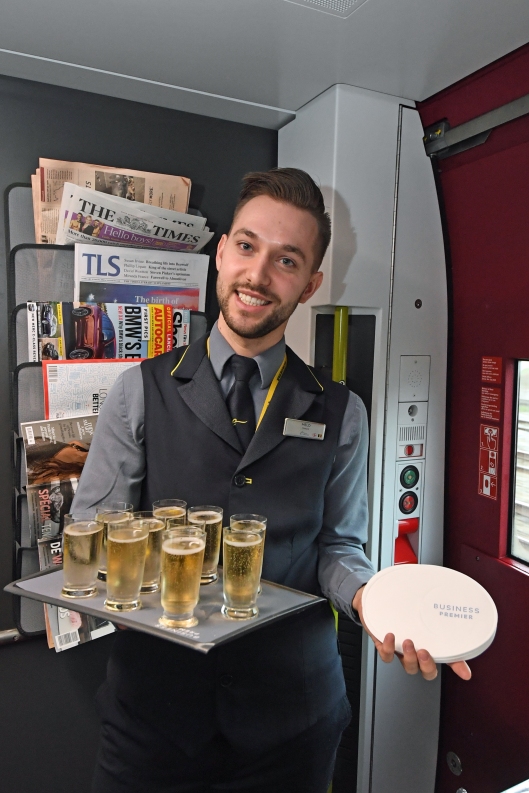 Melo serving champagne to celebrate the record-breaking run from London to Brussels.

Our brief stop at Brussels Midi felt odd as our Eurostar was using one of the through platforms rather than the bays traditionally used by services to/from the UK. Soon we were whizzing past unfamiliar territory for a Eurostar as we headed for the Dutch border and our first stop at Rotterdam. After departure from the city the media was given the opportunity to visit the cab and see how things looked like from a driver’s perspective. 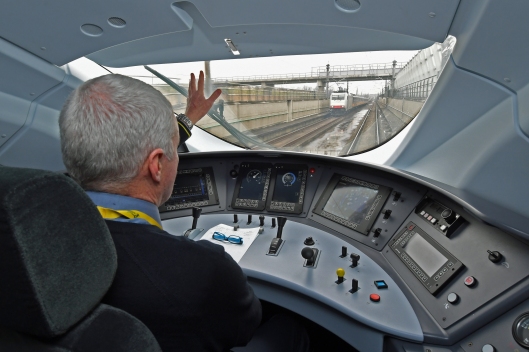 Our driver acknowledges a passing Dutch service heading for Rotterdam. The clean layout of the drivers desk and reliance on touch-screens is evident in the picture.

Just 40 minutes after leaving Rotterdam and 3hrs 41m after leaving London we pulled into platform 15 at Amsterdam Centraal station. We were greeted by the usual media scrum, well-wishers and the CEO of NS (Dutch railways) Roger van Boxtel, for the traditional handshake with Eurostar’s CEO, Nicholas Petrovic who’d travelled with us on the train. 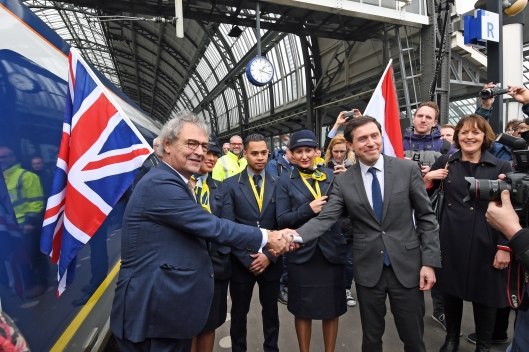 4032 stands at platform 15 at Amsterdam Centraal. This is where the new Eurostar lounge is situated so it will become the normal platform for the service to use.

After the formalities and media interviews were over we had chance to check-out the new Eurostar lounge which has been built alongside platform 15. 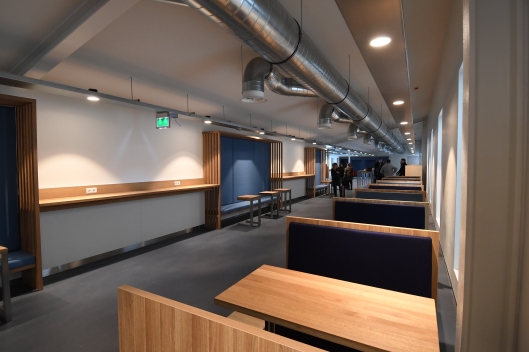 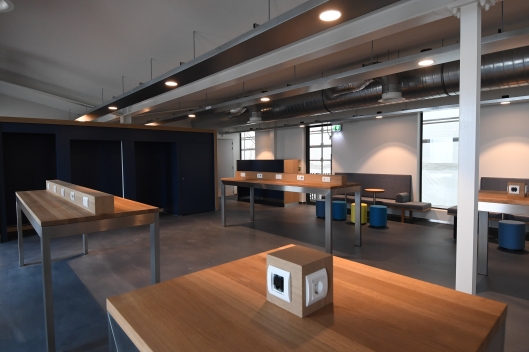 Albeit not fully fitted out, this is a taste of what the Amsterdam Eurostar lounge will be like

As yet, there’s no return Amsterdam – London service as discussions over passport checks are still ongoing. In the interim, London-bound passengers use a THALYS service from Holland and change at Brussels where they go through passport control before catching an onward Eurostar service to London. This is expected to change in October when passports will be checked in Holland.

We came back this way and I have to say that it was a seamless journey. Our THALYS service (whilst not as luxurious as an e320 as they’re a lot older) was perfectly adequate, as can be seen from these pictures. 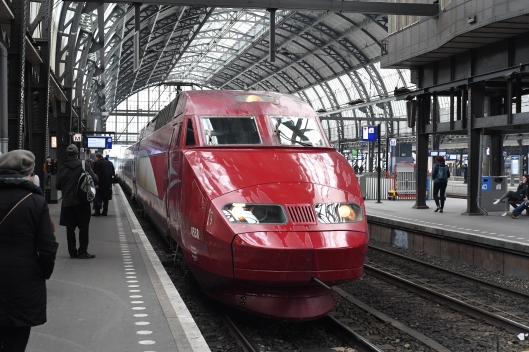 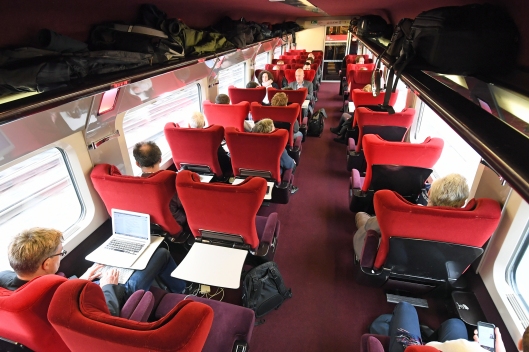 On board the THALYS

We arrived at Brussels Midi at 1708. By the time we’d gone through Eurostar check-in, security and passport control there was just enough time for a (very) quick drink in the Business Premier lounge before we were called to board our onward service, train 9153, the 17.56 to St Pancras, leaving Brussels 48 minutes after we’d arrived… 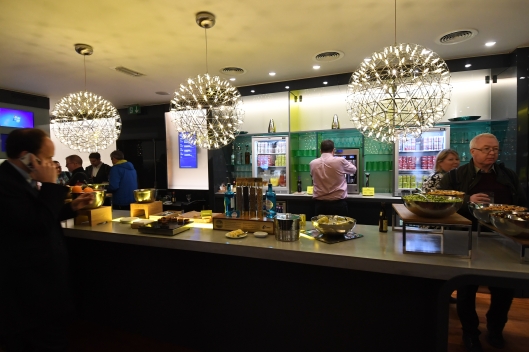 The London train from Brussels was formed of the same e320 set that had taken us to Amsterdam. 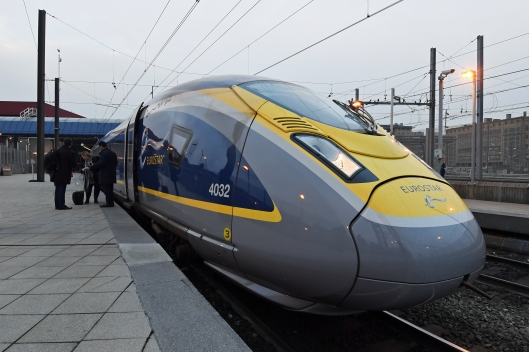 We had another good run with great service and lovely food all the way back to the UK. The free wifi on board allowed me to post details of the trip on social media and keep me up to date with my onward connection in London. 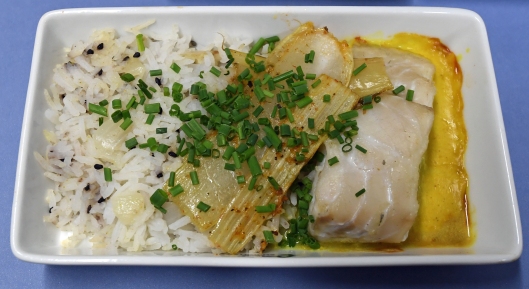 No, we didn’t starve! 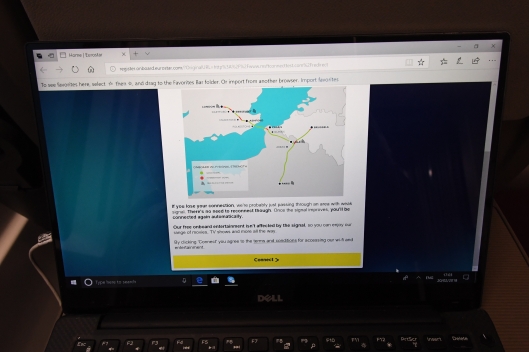 Eurostar’s wifi page which gives you information on the systems performance and advises of potential blackspots.

Bang on time at 19.03, we pulled into St Pancras International, which gave me enough time to get a few shots before hot-footing it over to Kings Cross and catch Grand Central’s 19.52 departure for Halifax! 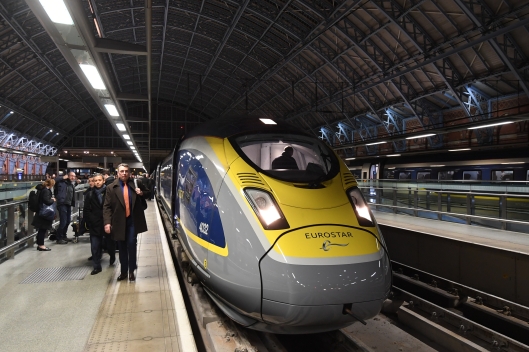 I’m looking forward to taking this service again in the future. It’s far better and more comfortable than flying and the 3hr 41m city centre to city centre journey time is very competitive. Why not give it a try yourself and see what you think ? Tickets start at a very reasonable £35 one way. You can book through Eurostar’s website here.