I woke up this morning to find that nothing I hadn’t expected had occurred in the local elections. To the surprise of no-one (except perhaps, party die-hards), UKIP voters had drifted back to where most of them came from in the first place – the Tory party. meanwhile Labour, the worst opposition in living memory facing the worst Government in living memory, had managed to gain 50 seats. As I type this, the Tories have actually managed to GAIN 11! In fact, all parties bar UKIP (who’ve lost 110) have gained seats! The Lib-Dems have managed to win 33 so far and the Greens just 4. The final numbers will make interesting reading, but not, I think for Labour.

That said, Corbyn supporters are busy on social media, trying to claim this is (somehow) a ‘victory’. Quite how they work that one out is a mystery. It’s like kicking at an open goal, missing, then saying “Yeah, but the ball only missed by a bit”.

Contrast these results with the final ones of the 2014 local elections (before Corbyn became Labour leader), when the Tories lost 236 and Labour gained 324. 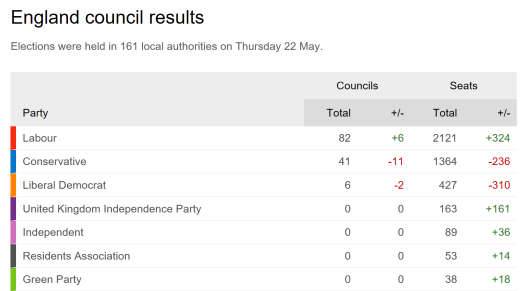 Here’s all the Labour’s local election results since 2010, showing the percentage of the vote and any swing. 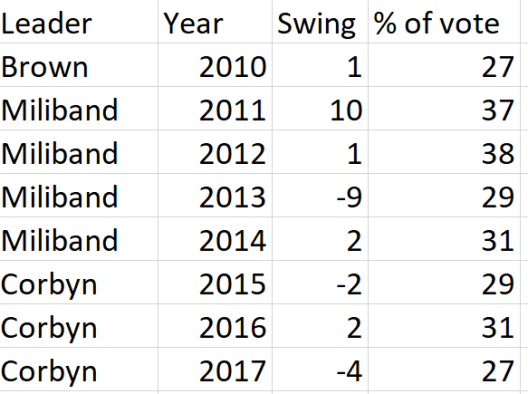 This puts Corbyn’s results into perspective. I, like many others have no enthusiasm for him or his party now. He’s betrayed Labour supporters over Brexit and there’s no sign of that changing. The hard left seem to be in full denial of reality mode, so the charade will continue.

The final results are in and they make interesting reading.

Despite former UKIP voters heading back to the Tories they still lost 33 seats, but that’s hardly a disaster. In the light of political events that’s not a bad result. Labour are crowing about having won 77 seats, but when you consider they’re up against such a disastrous and shambolic Government, this is underachieving on a grand scale, especially when you consider that the Lib-Dems are only behind them by 2 seats. The Greens will probably be happy gaining 8 as their recent showing in the polls and performance at local elections has been poor.

From these results I’d suggest it’s pretty clear Brexit has played an important part in who people chose to vote for. The Lib-Dems did very well in some places that were heavy Leave areas, again, I’d suggest that this is an obvious sign of ‘Bregret’. Mike Smithson (@MSmithsonPB on Twitter) has compiled this rather useful chart which demonstrates how opinion has changed recently. Does anyone seriously think this isn’t feeding into who people choose to vote for? 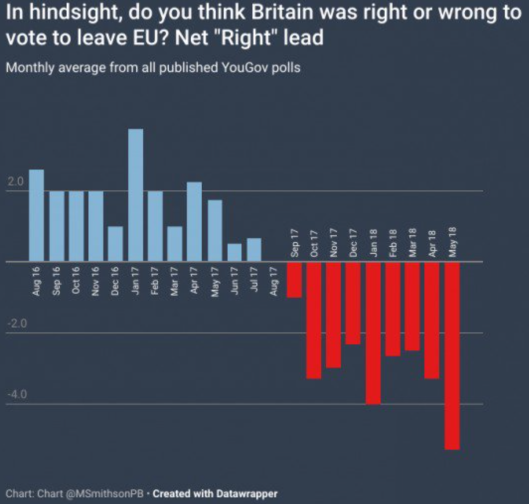 Members of the anti Hs2 mob are rather like folks who are waiting for a messiah – always hoping someone, sometime, will turn up to save them. The last false prophets were UKIP who the antis worshipped as the party who would kill off Hs2. It was never going to happen & everyone else could see through them, but that’s faith for you. Both UKIP & the anti hs2 mob would much rather you forgot this risible claim: 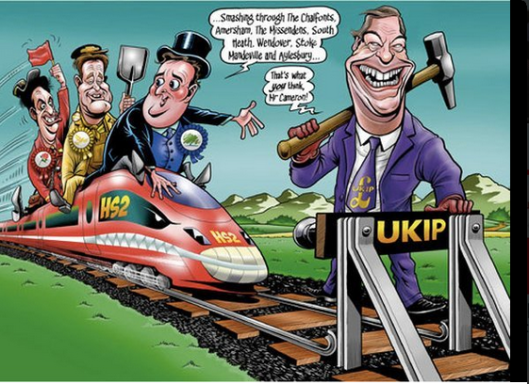 Since UKIP were shown to have feet of clay the antis have been scrabbling around for another saviour. This time they latched upon Labour’s Jeremy Corbyn. This was because an article published in the Guardian reported that Corbyn was due to deliver a speech condemning Hs2 & announcing his decision to oppose it (they even carried quotes from a draft of the speech).

However, when the speech was delivered & the report appeared, all reference to Hs2 had mysteriously disappeared. In many ways this wasn’t a surprise as Corbyn was in danger of walking headlong into a Tory trap. I blogged about it all here.

Then, yesterday, Corbyn published this on the rail network & his plans for renationalisation. In the report’s bullet points was this:

Clearly, some folks have been having words in Jeremy’s shell-like…

Whilst there’s no explicit mention of Hs2 – does anyone seriously think Corbyn would now oppose building hs2 in favour of going back to the drawing board, setting back plans by decades? Not only would this leave us with rail gridlock, it would put in jeopardy massive regeneration schemes in Birmingham, Leeds, Manchester & other Labour strongholds, costing thousands of jobs. Also, note Corbyn talks of increasing (not diverting) spending on High Speed rail.

As Corbyn is hands down favourite to win the Labour Leadership there’s now no chance that the Hs2 Hybrid Bill won’t pass its 3rd reading.