The Calder valley is seeing a package of rail improvements at the moment. The ones that are most visible to passengers are taking place right now as platform extensions on several stations are underway or just about to start.

The following stations will see platforms extended by varying lengths, with work due to finish by December 2018.

Here’s a good example: Hebden Bridge station’s the most historic on the rout as it’s in pretty much original condition, so any work has to be carried out sympathetically. Platform two is being extended by 56m, one of the longest extensions planned. The opposite platform only needs to be extended by a few metres. Here’s a series of pictures showing how the work has progressed. 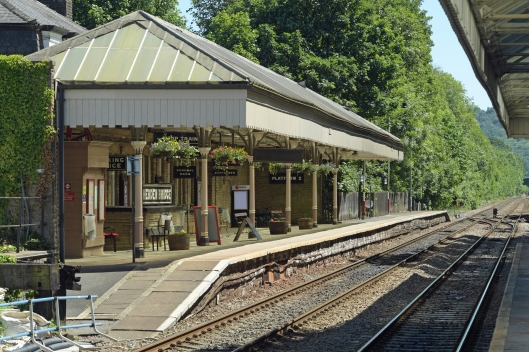 How it used to be on the 22nd June 2018: Platform 2 just as the work to extend the platforms was starting. On the bottom left of the picture you can see the old wooden buffer-stops to the former goods yard behind the Vortok fencing and the black pipes containing cable runs.

By 9th July the old buffers had gone, along with the platform ramp and cables were encased in protective plastic tubing.

16th July: The first precast concrete section of the platform extension were in place, along with the crane that was used to lift them into position during night-time possessions. 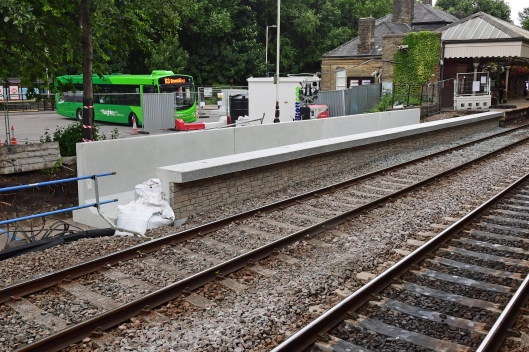 16th July: A closer look, showing the facing to the pre-cast concrete to enable it to blend with the original platform.

Here’s a view inside the new platform on July 23. The plastic pipes that protected the signalling cables have been replaced with concrete cable toughs. 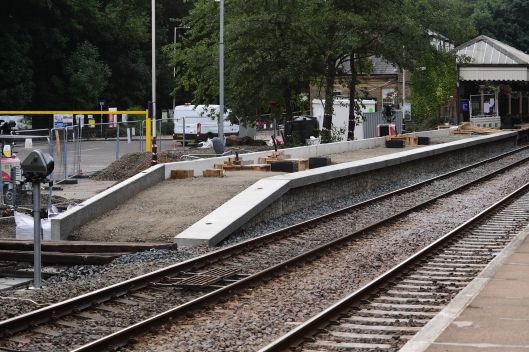 By the 30th July the platform structure was complete. Foundations for lighting columns and much of the hardcore infill were in place.

9th August: The coping stones and tactile paving is in place, along with a drainage channel at the back of the platform and finished bases for lighting columns.

Meanwhile, platform 1, which had a much shorter extension and had limited access was being built by more traditional methods, using breeze-blocks. Platform 1 on the 21st July, a much more restricted site access than platform 2 means traditional construction methods were being used.

The platform extensions aren’t the only work happening at Hebden Bridge. The signalling is being replaced and the listed Lancashire and Yorkshire signalbox is expected to be decommissioned in October. Here’s one of the new signals which guards the crossover and siding.

To enable modern step free access to platform 1 the former goods lift shafts will be refurbished and used for new lifts.

Meanwhile, over at Sowerby Bridge, the long-abandoned section of the Bradford bound platform has been stripped of undergrowth ready to be rebuilt. Here’s how it looked on the 24th July.

Here’s a different view taken on the 16th August. I’ll keep blogging about the upgrades to the Calder valley line and add as many pictures of the work as I can over the next few months.

I’m on the move again today with three different assignments to fulfil. Hopefully, the weather will play ball. The dull, heavy cloud that blighted me yesterday as given way to a variety of shapes, styles and heights, broken up by long periods of blue sky.

Right now I’m making my way from Sowerby Bridge to Preston. I changed trains at Hebden Bridge as that gave me time to check-out progress on the platform extensions and also admire the collection of old Calder Valley railway prints and photographs on display in the waiting rooms. Here’s two examples from the artist AF Tait. 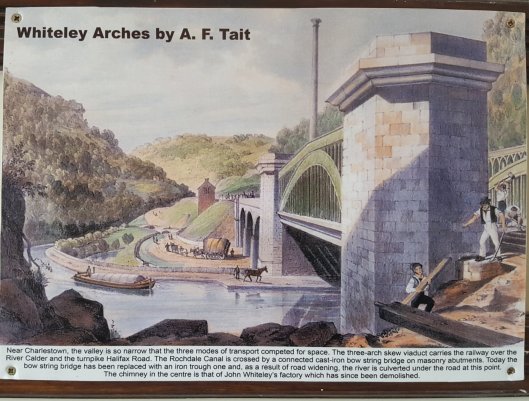 The next shows the original Brighouse station (built in the Chinese style) from the days when the town was the railhead for Bradford, seven miles away.

If you’ve never been to Hebden Bridge station it’s well worth a look. It’s probably the best preserved former Lancashire & Yorkshire station left on the network. I’ll add some pictures of it later.

Right now I’m passing through a succession of old Cotton Mill towns (Burnley, Accrington and Blackburn) along a line that once used to be full of freight trains carrying coal, the raw materials for the mills – and the finished products to market. The decline since those heady days is evident, both in the towns and the railway that serves them. Yet the railway rationalisation of the 1960s-80s is now in reverse. The decline in the towns is harder to put right, especially after a decade of Government imposed austerity. Things are set to get worse thanks to the Brexit shambles as these towns were persuaded to vote Leave (against their own interests) and many folk are living in blissful ignorance of the gathering economic storm that’s coming their way and that will hit these shores in 2019.

I’ve arrived in Blackburn the same time as a passing shower! Fortunately, we’re heading in opposite directions.

Northern Rail seem to be having a few fleet issues today. Many Calder Valley services are short-formed. I’m jammed in the vestibule of a 2-car Class 158. This service is a normally a 3 car. The Class 153s that are used to strengthen many other trains seem noticeably absent today.

On arrival at Preston I’ve connected seamlessly with Northern’s 10:44 to Barrow in Furness. A 2 car 158 is a bit of a let-down after the TPE 185s that used to ply the route. There’s no power sockets or wifi so it’s not much of a mobile office. However, the Conductor has done his bit to make the trip more interesting. Look what’s on the PIS! 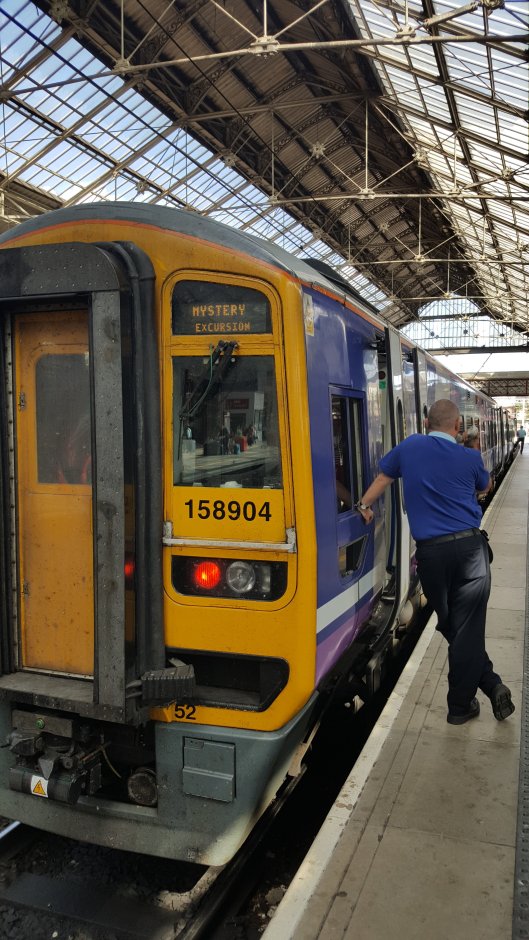 After another seamless connection at Barrow I’m now heading up the Cunbrian coast to Whitehaven and the weather’s ideal. Heres the view as we approached Ulverston.

I’m heading home now, but things didn’t quite go to plan! When I arrived in Whitehaven the rain Gods had arranged to co-incide and a band of rain cloud sat over the town. Luckily, it didn’t hang around so my walk along the old mineral tramway Northwards towards Parton was blessed with sunshine. I do like this area as a photo location (you’ll see why later) but Parton itself is a sad place nowadays.

Unless you knew the Cumbrian coast 40 or so years ago you can be forgiven for not knowing about its industrial heritage. Coal mining, steel-making and chemicals were the backbone of the economy. Now they’ve all gone – along with the fishing industry. Today, the area’s biggest employer is the Sellafield Nuclear plant, followed by the tourist trade.

Add to the mix a decade of austerity since 2008 and towns like Parton are suffering. They never made the transition from industry to tourism as they have little to offer.

I’m on the move again, this time from Barrow in Furness to Preston. The journey was gorgeous. The weather’s been perfect and the views across the beaches sublime. Here’s a sample

I stopped in Barrow in Furness for an hour to explore a little as I’ve not been here for 12-13 years. Now I can see why. Barrow was (and is) a shipbuilding town but there’s a problem. Britain is no longer an Imperial power or Empire and we certainly don’t rule the waves anymore. Our Navy’s shrinking in line with our reduced place in the world, yet towns like Barrow cling to a past that’s not coming back. Now Barrow is reliant on building the ultimate baroque arsenal – Nuclear submarines. They’re great for getting a seat at international tables – even more so after Brexit as it’s all we have left – but can our enfeebled economy still afford them? I suspect Barrow’s obvious love of the past may be the harbinger of its doom. Like many old industrial towns, the walk in from the station is past numerous derelict shops and reminders of a better past, like this: 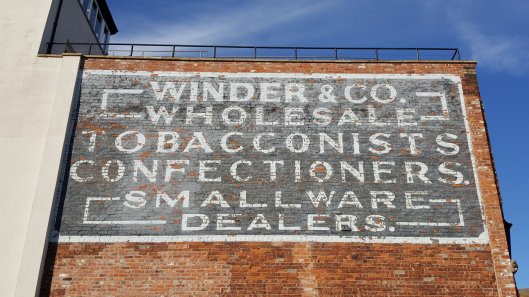 After the madness of the last 7-10 days this week looks positively relaxed by comparison! Most of my time will be spent working from home, writing several articles and editing the enormous collection of pictures I’ve taken recently. My commute to work is a lot easier too – all I have to do is make my way from the front bedroom to the back office, with occasional forays to the kitchen!

First up in the editing list are pictures I took in the Manchester and Bolton areas when I went to have a look at progress on electrification of the line from Manchester to Preston. Here’s a sample. 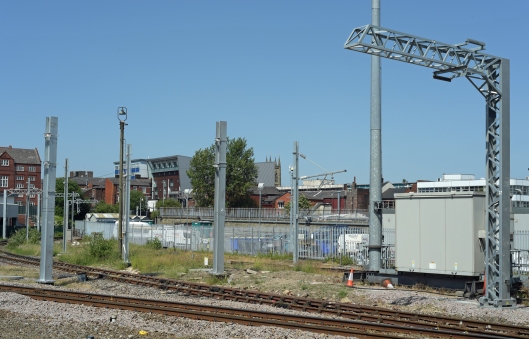 Masts have appeared around Bolton West Junction and the line to Blackburn. The route isn’t being electrified but the station area is in order to allow operational flexibility during engineering work or emergencies when trains may need to be turned round. 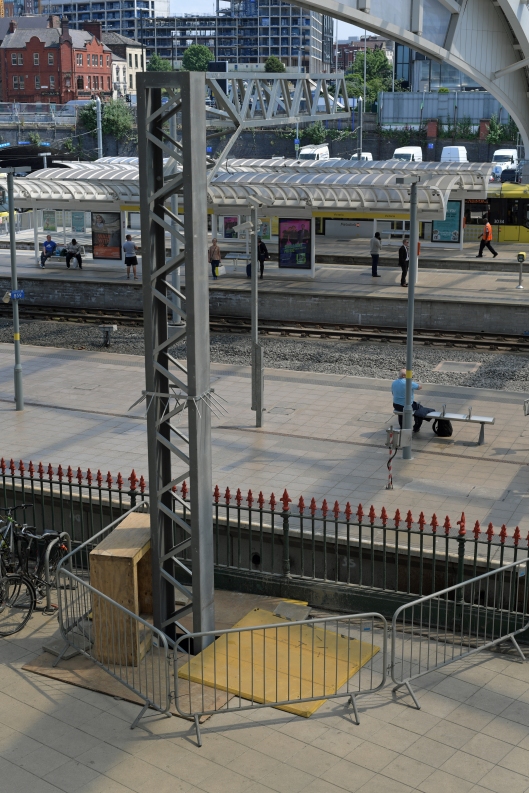 The bay platforms (1 and 2) at Manchester Victoria also have masts in place now.

Once I’ve all the NW pictures done later the morning I’ll be sorting out the ‘3 peaks by Rail’ pictures, so expect a few links to galleries later. After that, I’ve pictures to add from the High Speed Rail Industry Leaders conference in Leeds, plus a large amount of pictures from the press trip to see Siemens in Germany. Expect lots of pictures of brand new trains (like this one)!