It’s been less dramatic than the James Herbert novel of the same name but there’s no doubt the foggy weather that’s dominated much of the country this week has caused a few problems – especially for the airports. On Monday 10% of Heathrow flights were cancelled. Other airports were hit too. Driving wasn’t much fun either as visibility was slashed across the motorway network, leading to concerns about safety.

In contrast, the railways carried on pretty much regardless. I took the train from Halifax to London on Monday & for many parts of the journey my 125mph service ran to time or early. The same picture was true across the network.

Sadly, the railways publicity departments haven’t capitalised on this at all. This may be because they’re not exactly short of passengers as it is – but even so. The opportunity to stress the benefits of rail travel shouldn’t be missed.

A message I’ve been trying to get across is the fog shows how modern railway systems aren’t bothered by fog. Hs2 will be a good example. It will rely on in-cab signalling systems rather than lineside signalling (aka lights on poles). 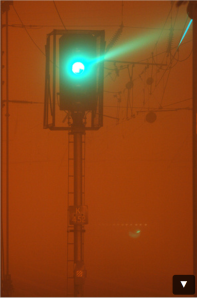 The benefits of a frequent high-speed, high-capacity rail line between our major cities that’s immune to fog is something to celebrate. It’s also a rather good argument to ensure that Hs1 and Hs2 are eventually linked to allow pan-European travel.