Well, if they had any sense they would, but sense is the one thing noticeably absent from the anti Hs2 mobs social media campaign nowadays. It’s become the modern refuge for and version of the old green ink brigade! (here’s an explanation of the term for readers who may be unfamiliar with it).

In fact, it’s the green ink brigade who seem to be keeping the antis social media campaign (and I use that term very loosely) going.

More and more of the old campaigners have left the field nowadays. This is due to a combination of factors. One is that many of them have been bought out by Hs2 Ltd & moved on (metaphorically and literally). Another is that most sensible people have worked out that it’s futile. There was a noticeable drop off in their campaign after the Hs2 Hybrid Bill passed with a massive majority and another after last years general election when it was clear the political battle was lost.

As the pragmatists and rational folks have retired, the – how shall I put this? “eccentric” wing have taken taken centre stage. In a few cases they’ve been bolstered by folks who don’t just write in green but prefer the most vivid shades of the colour! They’re a mix of UKIP members, who bring their own particular brand of xenophobia, paranoia and poor education – and the genuinely bonkers. Folk who believe in any conspiracy theory going but think they’re the only one’s who really know the truth. It’s like an internet version of Bedlam, only without the restraints.

To say this leaves their campaign with a image problem is an understatement. If I was Hs2aa or any of the few intellectual Nimbys left, I’d be tearing my hair out at their behaviour as it’s utterly destroyed any credibility they might have claimed to have. It also makes it very easy for politicians to ignore them. When you see some of their tweets and Facebook comments, it’s not difficult to see why. So, here’s a selection of the anti Hs2 social media car crash. Enjoy! 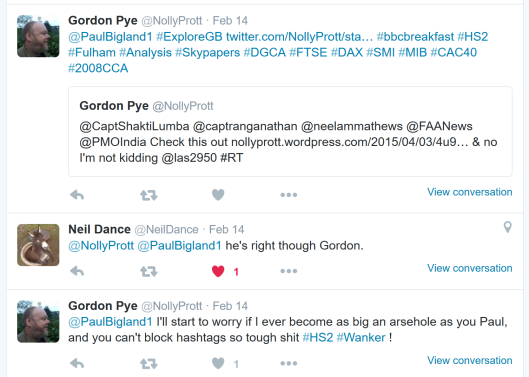 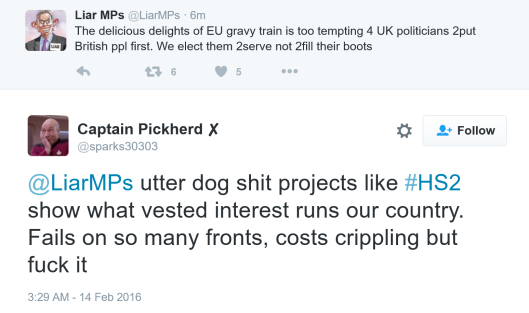 Meanwhile, over on the anti Hs2 facebrook groups; 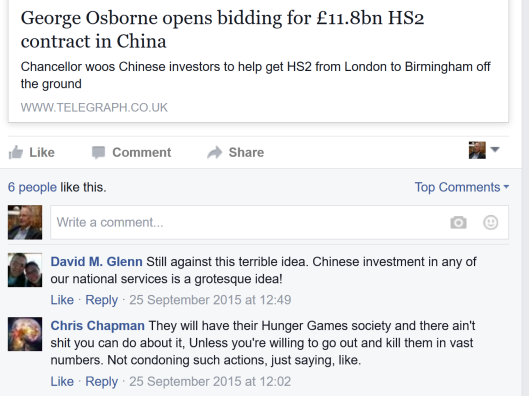 I try to avoid using Royal Mail nowadays. Not only has it got expensive but it’s also got much slower. Like most businesses I prefer sending invoices by email. But sometimes, there’s clients who still insist on doing things the old fashioned way. So, after a day catching up on paperwork I popped down to the postbox, secure in the knowledge that I’d beaten the 17:30 deadline for mail at my local postbox.

It was only when I’d posted my letters that I read the front of the postbox & realised the collection time had moved. To 9am – the next bloody day! Royal Mail have moved the goalposts (again) and lost me yet another day. Then they wonder why people like me are loathe to use them!

The rot set in a few years ago when I still lived in North London. In those days (probably only about 15 really) Dean, our local postie, used to deliver our mail around 8am. This meant that I had time to pick it up before I left for work and I could deal with it that day. Then RM changed the delivery times. Instead of it coming in the morning, it could come anytime after midday. That meant I lost a day as by the time I got home,it was too late to contact anyone vis a vis bills, or whatever. Then Dean was moved on to another walk & we suffered a series of posties who couldn’t find their own arse with both hands – never mind our letterbox. By this time I was often working from home & my morning routine would take in doing their job for them & dropping all the misdirected mail in at the right addresses.

Now the barstewards have lost me another day. Why? Because even if I’m at home & intercept the (late) afternoon post – I can’t even reply the same bloody day! My letter sits, festering in the damned post box until the next morning!

Damn you Royal Mail. In a world where service gets quicker – you just get slower.