Humble apologies for the lack of blogging recently but I’ve been taking advantage of the country slooowwlllyy opening up to get some work done away from the confines of the Calder Valley. Much as a I love the Pennines and home it’s so refreshing to be able to get out and about again, visit places old and new – and start to see what’s being happening whilst we’ve all been constrained.

In order to do that I’ve been popping over to Merseyside most days (bar today) in order to experience life in the big city and see what’s been happening with the rail network whilst we’ve all been doing our Rip Van Winkle impressions. I’ll blog about some of my experiences in greater detail when I have the time as my wanderings have given me a huge amount of material – and pictures. The pictures are slowly starting to appear on my Zenfolio website in the ‘recent’ section but there’s a few tasters in this blog.

I’d hoped to have been able to capture shots of the new Stadler built trains that will be taking over Merseyrail services from two of the oldest train fleets in the UK – the BR built Class 507/508 fleets. There’s a blog looking back over their lives and times here.

Sadly, the only 777s I could find on the network were a handful confined to barracks at Kirkdale, as you can see here.

Also at Kirkdale was one of the older Class 508 units which had had an ‘interesting’ time at Kirkby when it tried to make its way to Wigan, despite the lack of track, electrification or that there was a chunk of platform in the way. In my day a ‘Kirkby kiss’ was a metaphor for a head-butt. Here’s the Merseyrail unit that tried to recreate the old tradition with a nice little board in front of it explaining what it failed to do…

My wanderings took me over the river to Birkenhead and the Wirral exploring some areas that I hadn’t visited for forty years, which was a bit of an eye-opener. To start with, here’s another ‘new’ train that’s having a few teething problems. OK, I admit, it’s not really new at all, this is ex-London Underground D78 stock converted to diesel power to be used on the Bidston – Wrexham line. The Vivarail conversions cover a variety of traction packages and are actually a clever idea.

Whilst visiting Birkenhead North I was drawn to the dereliction of the old docks which once had an extensive rail network – although that was already well in decline during my last visit in 1981! Now the area looks like a backdrop for a ‘ColdwarSteve’ montage. I spotted this which summed things up for me. Derelict shipyards and docks occupied by a pair of mothballed Royal Navy ships and – what the hell’s an old Blackpool tram doing there?

I’ve got a whole host of pictures to finish editing yet which will appear in another blog. Tomorrow I have a couple of ‘Zoom’ meetings but hope to get them done before then. After that, there’s a lot more blogging to come…

I’ve a favour to ask…
If you enjoy reading this blog, please click on an advert or two. You don’t have to buy anything you don’t want to of course (although if you did find something that tickled your fancy that would be fab!), but the revenue from them helps to cover some of the cost of maintaining this site – and right now (because of Covid), us freelances need all the help that we can get. Remember, 99% of the pictures used in my blogs can be purchased as prints from my other website –  https://paulbigland.zenfolio.com/

It’s slightly later than planned due to circumstances beyond my control, but I’m leaving a wet and miserable Calder Valley behind for a night out with friends in Liverpool. Dawn, plus Fran and Aubrey are already there and I’m catching up. Due to timings it’s not the speediest of journeys as it involves several changes of train, which is why I’m typing this now on the platform of Hebden Bridge station after arriving from Sowerby Bridge on a Blackpool service. Still, it could be worse. In the background I can hear a band playing. I’m assuming there’s an open air gig in the nearby park, which must be well soggy! I’m glad I’m not there – even tho’ the forecast for Liverpool’s no better. I’m off to see some bands too – but in a drier place. Our friends love Liverpool and have persuaded us to join them in seeing a Beatles tribute act in the resurrected ‘Cavern Club’. I’ve fond memories of the area in the 1970s when a club across the road called ‘Eric’s’ was in business. You’d get a real mix of bands in those days, from punk to old hippy bands like ‘Gong’. 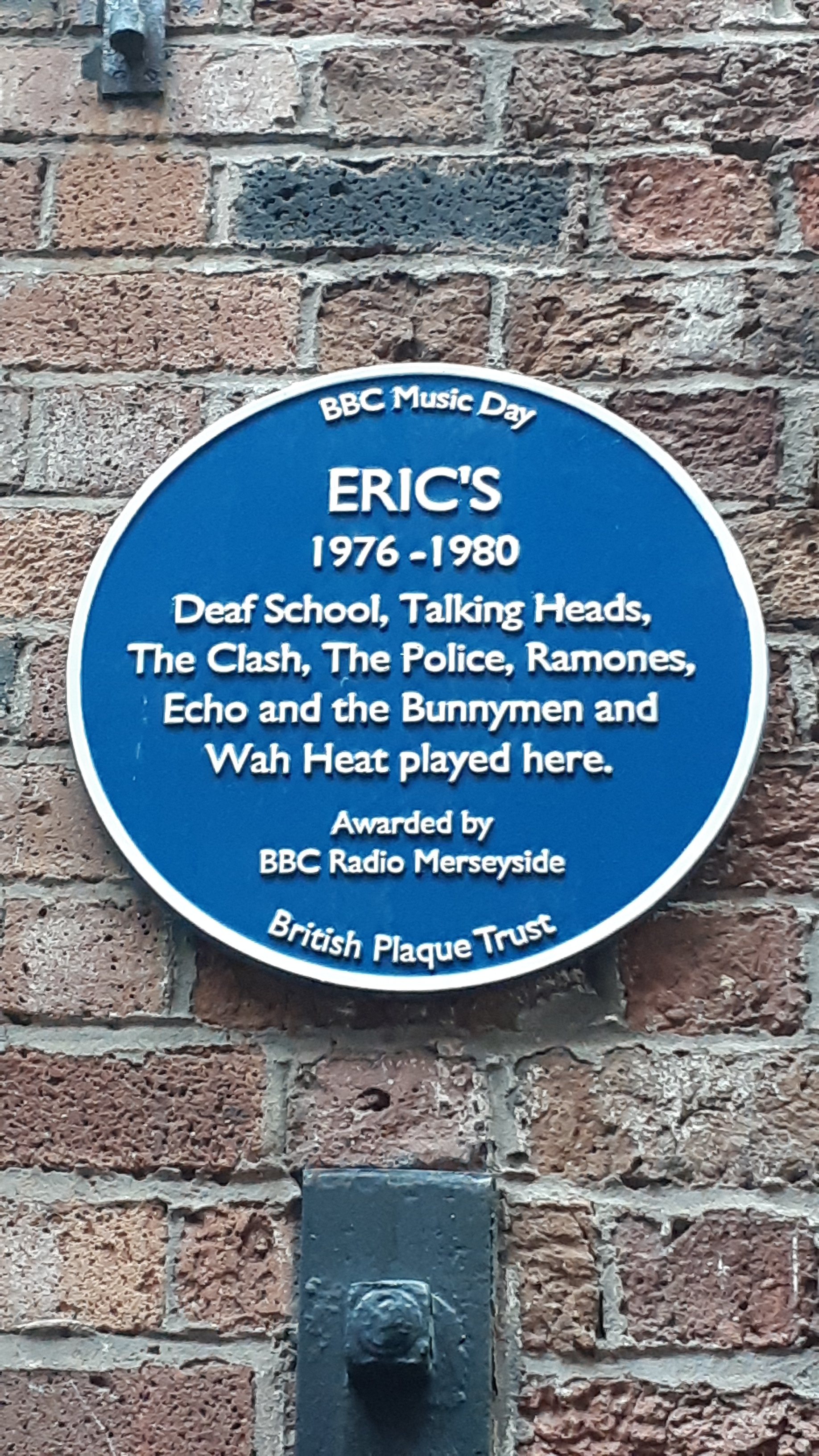 We’ve booked a hotel just round the corner as we’re making the most of the weekend. All I need now is for this train to turn up…

A single Northern Class 156 turned up (almost) on time at 16:07 to ferry me across the Pennines, we’re just about to arrive in Victoria now. My fellow passengers consist of families returning home after a day out and younger folk heading out for a night in the cities clubs and pubs – although there’s not that many of them as it’s too early!

Victoria was an even more surreal experience than on a normal Saturday due to the number of young women and girls dressed as cats or book and film characters. I spotted ‘Wonder Woman’ and Rapunzel, amongst others. I’m assuming that some event’son rather than this being some bizarre co-incidence!Whilst I was waiting for the liverpool service a pair of ex-West Midlands trains Class 150s put in an appearance on a StalyVegas – sorry, Stalybridge service. 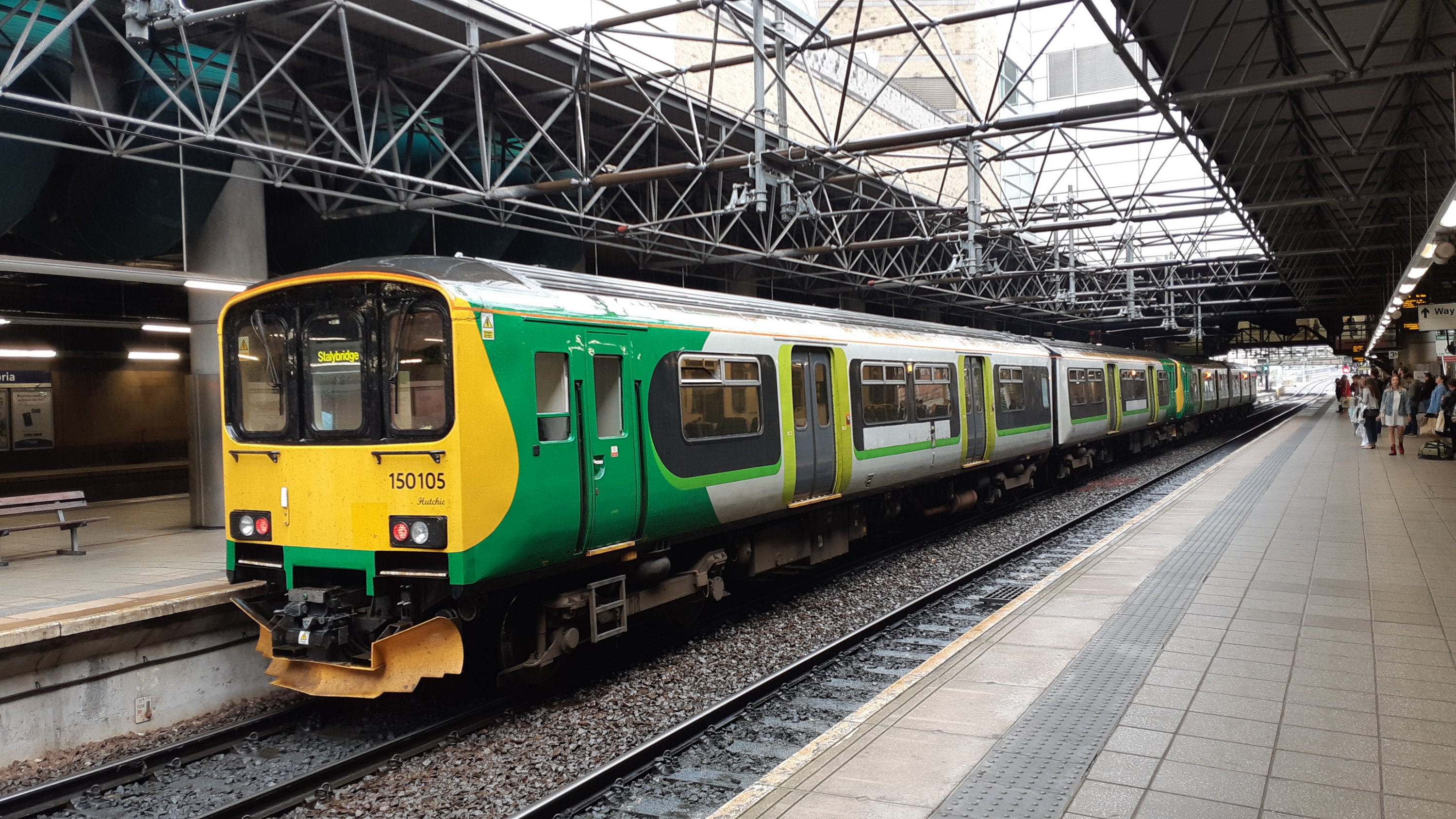 I’m currently on a TPE 185 to Lime St. It’s another train carrying a mix of families and revellers enjoying different Saturday experiences.

No time for blogging right now, there’s too much going on! Our night out has coincided with Liverpool gay pride and the city is absolutely buzzing!

We had a fab night listening to songs from the ‘fab 4’ which brought back a huge amount of happy memories as well as one or two sad ones. The Cavern was far better than I expected. It could have been touristy and tacky but it was anything but. Yes, there were plenty of tourists but they were there because they loved the Beatles music. It made for a great atmosphere.

Today many of the ‘Big 6’ gang are on tour to Liverpool to take in some sights, some shops, food and pubs. Unfortunately, the weather’s being less than kind. As I sit and write this the latest rainstorm is just beginning to abate. There’s more forecast throughout the day. The weather may dampen us but it’ll not dampen our spirits. I’ll blog throughout the day, so stay tuned…The rain held off long enough for me to walk to the station and join the merry band. Here’s how the Calder Valley looked on the way.

Now we’re scattered throughout a packed 2-car Class 156 that’s working the 09:56 to Manchester Victoria. There’s another concert on in this evening so this service is busy carrying fans as well as the normal load of daytrippers. 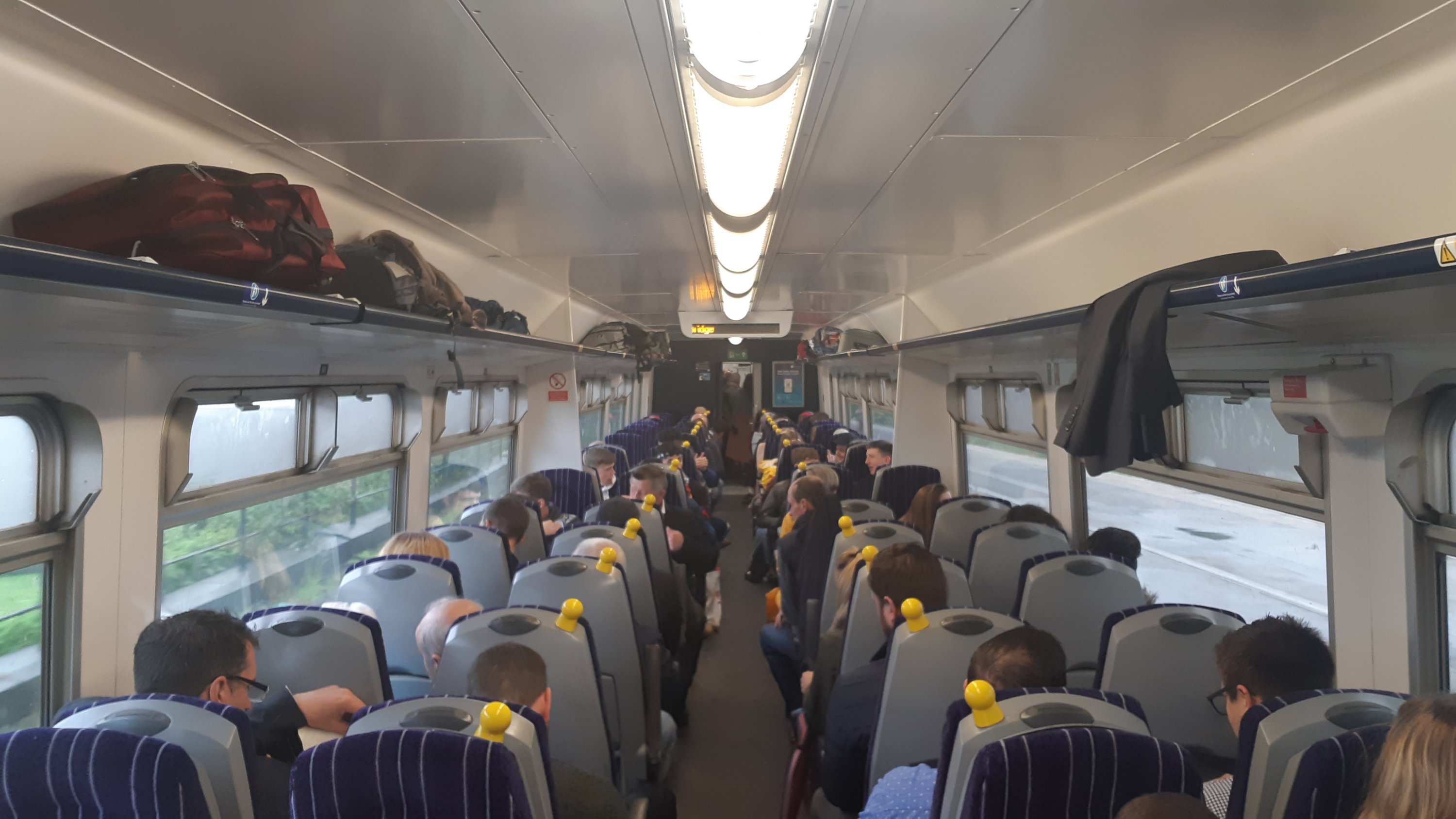 The atmosphere aboard’s happy but damp!

The group split at Manchester Victoria because some folk had bought ‘Northern only’ rail tickets, but Northern weren’t running from Victoria to Liverpool today! They headed off to Oxford Rd fir their train whilst the rest of us caught a direct TPE service. It being Saturday, our train was packed with women off to various hen nights.

Now we’re in the first of our pubs. Nowadays it’s called ‘The Dispensary’. I remember it by it’s old name, ‘The Grapes’.

09:00.I’m about to head back into Manchester to meet up with Neil Dinnen’s stag party, who’ve enjoyed their first night in Manchester. So much so that I’m told they didn’t get back to the hotel until 03:40! Here they were last night, before they set off.

Today the group’s splitting up for different cultural activities. Some are off on a busman’s holiday and visiting the East Lancashire Railway. I’m taking the second group back to my birthplace – Liverpool – for a tour of the city. No doubt we’ll be taking in a few of some of the architectural gems that make up the port’s pubs. Expect a few memories and pictures later…09:35.For once, I’m glad a train was late! I’m currently sat on the 09:22 from Sowerby Bridge to Manchester, which I was due to miss by about 5 mins but as it was running 6 mins late I breezed straight onto it as it was already sat at the platform.11.05.Whilst waiting for the sore heads to arrive I’ve been taking pictures at Manchester Victoria station. Having known this place since the early 1970s it’s fantastic to see its resurgence after years of decades of decline and neglect. Nowadays the main concourse is buzzing with people, some of whom now linger at the bars and cafes like these.

Whilst waiting I’ve also been observing. As a photojournalist I’m always observing and looking for shots that tell stories. One thing I noticed today was the number of otherwise healthy young men missing legs. My suspicion is that they’re ex-servicemen. Unlike an earlier generation, they don’t hide their injuries by wearing long trousers. Their prosthetics are on display.12:15.Our stag group are now on the way to Liverpool aboard a packed and late running TPE service where the numbers aboard have been bolstered by dozens of Liverpool football supporters.17:16.We’re heading back to Manchester after a wonderful afternoon in Liverpool. I take back what I said about football supporters as the city centre was lacked with them, yet the atmosphere was excellent. 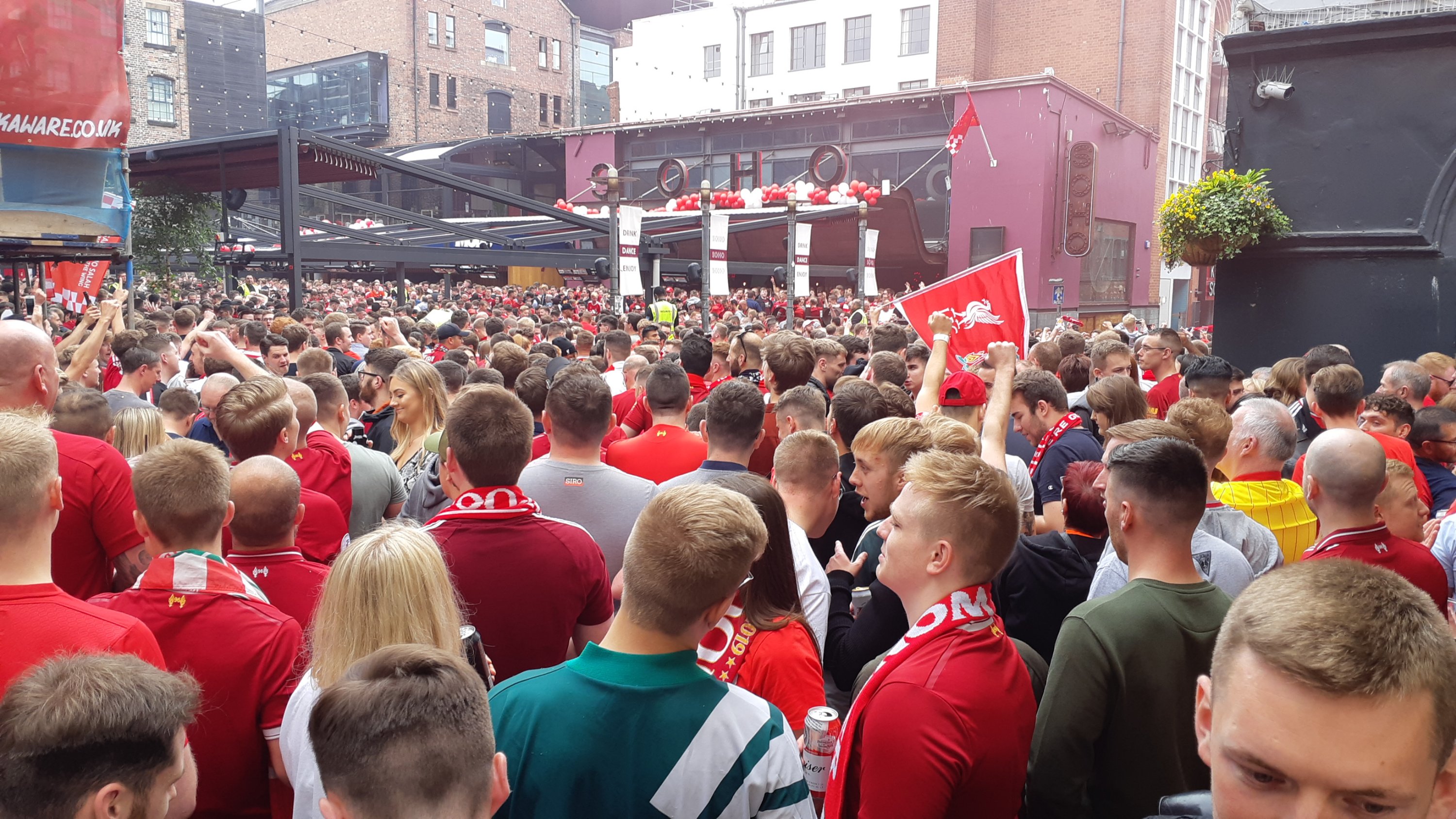 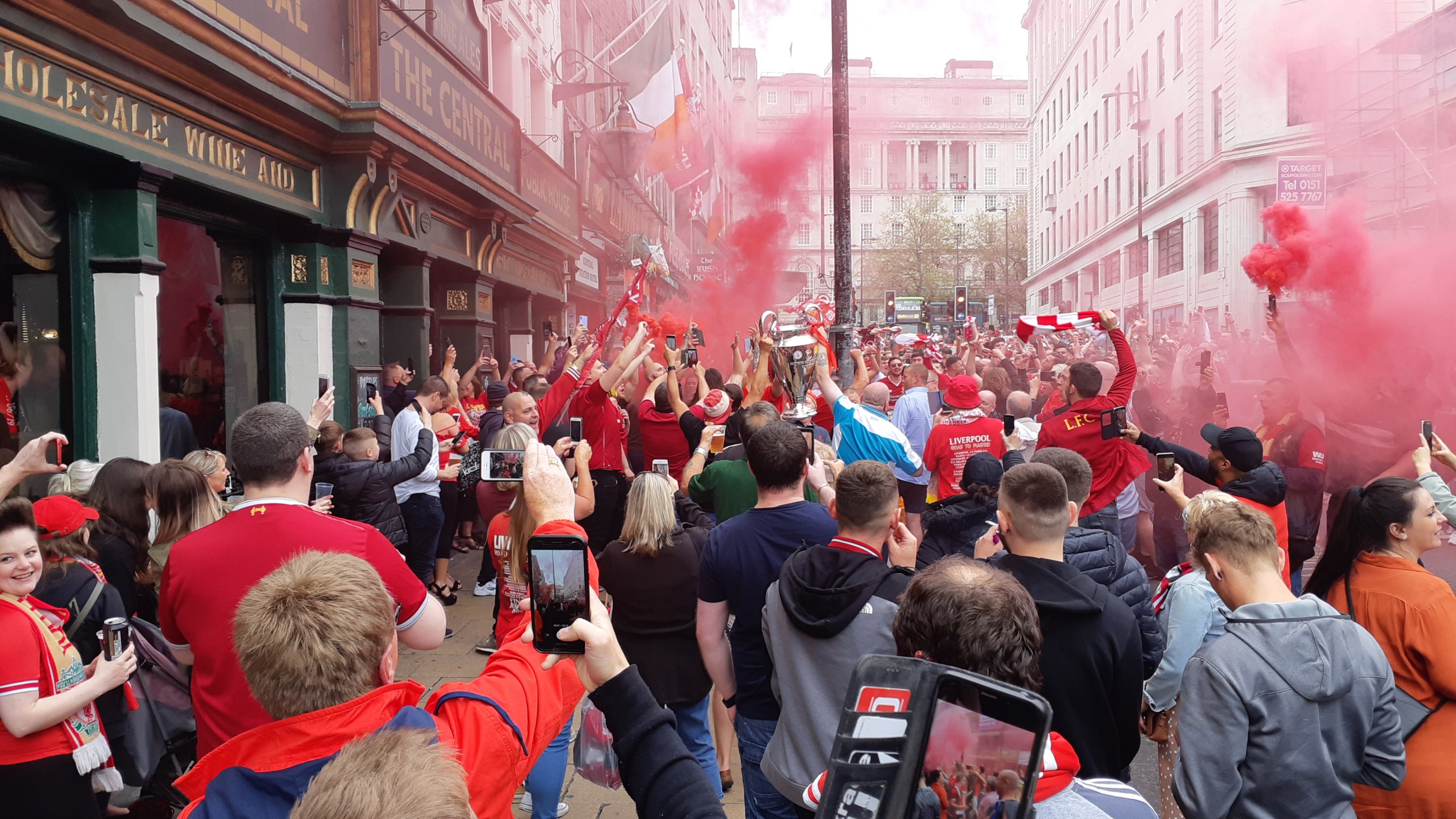 We’ve left the fantastic atmosphere of Liverpool behind to return to an almost equally buzzing Manchester which is still full of ‘Spice Girls’ fans and folk looking forward to a night out in this vibrant city. I’ve broken off from the others for a quiet pint (well, as quiet as it gets on a Saturday night) in the Castle Hotel in the Northern Quarter before meeting up with everyone for a meal.

It’s time to go home! I’m on the 22:58 from Manchester back to Sowerby Bridge after leaving the rest of the merry band enjoying beers in the Northern Quarter.

To say the train is raucous would be an understatement, but if you ignore all the expletives it’s actually very good humoured.