I’m back in the bosom of the Pennines for the weekend after a few days on the English Riviera helping the folks from ACoRP with preparations for their community rail awards which will be held in Torquay in October.

I must admit to being pleasantly surprised by Torquay. Despite having a reputation as a destination for the elderly there’s a lot of life in the town – and if the floating gin palaces in the harbour are anything to go by there’s a fair bit of money too! The ACoRP awards will be held in the Riviera International Centre which is by the sea front & adjacent to the lovely Torre Abbey. The centre’s exterior isn’t up to much as it betrays its age & that eras love of bare concrete. Inside is a different story & the facilities we checked out make it ideal for the awards. The staff were very helpful & easy conversationalists, regaling us with stories of previous events & what happens when several thousand young farmers descend on the resort for a gathering at the centre!

I was only needed for some of the meetings so I had time to nip out & get pictures at Torquay’s attractive railway station which dates from 1878. Unlike many stations of the era it’s intact & boasts full length canopies on both the Up & Down platforms. Both the canopies and the footbridge have been listed Grade 2. The station is staffed & still possesses both a ticket office and cafe. Right now the buildings are being refurbished, the attractive old footbridge has been closed & passengers are using a temporary structure until May when all the work will be completed. Torquay isn’t the only station on the route receiving attention as both Torre & Paignton are being refurbished at the same time.

Torquay is served by both First Great Western and Cross Country trains so you get to see both ends of the spectrum when it comes to trains running the services.Local services are in the hands of 2 -car Class 143 Pacers which are strengthened to 3 cars by the addition of a class 153. You’ll also see 2-car Class 150s, some of which are old friends of mine as previously they were used on the Gospel Oak- Barking line in London. Intercity services are in the hands of the venerable HST whilst Cross Country use a mix of 4 & 5 car Voyagers. 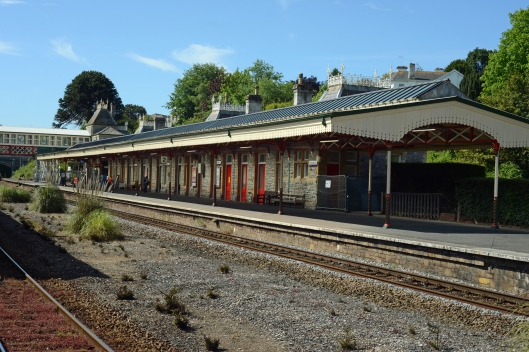 The Up (London) side buildings at Torquay

The temporary footbridge with the main station buildings beyond.

After our meetings we had time to explore the cliff trails to nearby Babbacombe which form part of the South West Coast path. The weather was glorious & the views across Lyme Bay were at their best. Here’s an example.

Of course when we reached Babbacome we had to take a trip on the funicular railway down to Oddicombe beach.The 720ft long 5ft 8in gauge railway opened in 1926 but was closed during the war for security reasons & didn’t reopen until 1951. It’s a true community railway as ownership was transferred from Torbay Borough Council to the Babbacombe Cliff Railway Community Interest Company in 2009. You can find their website here.

The red sandstone cliffs around the bay are high, steep and unstable. The North end of Oddicombe beach is buried under a rather frightening looking cliff collapse that carried away a house from the end of the cul de sac 150 ft above back in 2013. Incredibly, despite the obviously dangerous condition of the landslide & the warning signs on the beach some people ignore them to risk both their own lives & those of their children to frolic under the nose of the collapse.

Our brief chance to mix business with pleasure came to an end on Friday but it was very worthwhile trip. Now we’re all looking forward returning for the awards on October 1st. So,if you’d like the opportunity to join us all – now’s your chance. The closing date for entries to the ACoRP Community Rail awards is the 19th June. Here’s a link to the Awards webpage where you can download an entry form or book a table at the event.