Politicians have a habit of saying stupid things about railways – Labour politicians doubly so because of their belief that renationalising the railways will cure all known ills, heralding some sort of socialist nirvana and golden age where all the trains will run on time and nothing will ever break. How else can we explain yesterdays superbly stupid tweet from Shadow Chancellor John McDonnell. 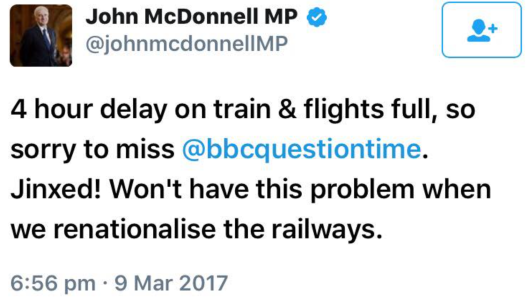 The delay was caused by the overhead wires on the East Coast main line near Retford failing, which brought many services to a halt.

How renationalising the railways will stop such incidents happening is a mystery, as to all intents and purposes Network Rail (who maintains the ECML) is already under public ownership and supervision! Perhaps McDonnells answer will be to do what the last Labour Government did and string up less wires? After all, in all their years in office between 1997 and 2010, Labour only managed to electrify a paltry 20 miles of line between Crewe and Kidsgrove. Or perhaps those nasty capitalist trains whose pantographs have a habit of bringing down the wires will have their carbons replaced with copies of ‘Das Kapital’? Unfortunately, inanimate objects still obey the laws of physics and remain stubbornly immune to political rhetoric from right, or left.

Sadly, quite a few Labour MPs have form for this sort of grandstanding. In the past I’ve blogged about both Michael Dugher and Andy Burnham making fools of themselves in this fashion. Mind you, it’s not just Labour who come out with crackpot stuff like this. The ‘Vulcan’ – John Redwood, the Tory MP for Wokingham once suggested trains have their steel wheels replaced by rubber ones – which provoked this riposte from Michael Roberts of ATOC.

Perhaps McDonnell should put down his copy of dialectical materialism for Marxists and pick up a history book. Then he might learn about the fate of the last politician famous for making the trains run on time. Benito Mussolini…