I haven’t blogged about the Stop hs2 campaign for some time, mostly because it’s a busted flush nowadays, but I thought it would be useful to sum up the state of play in the final weeks before Phase 1 gets Royal Assent.

Ever since Hs2 passed 2nd reading in the Commons with such a stonking majority the antis campaign has been doomed. From that point on there was a noticeable decline in their efforts which has continued ever since. Now they’re doing a very good impression of the fabled Oozlum bird! The final straw for many of them was the fact the Lords Hs2 Committee made it very clear they weren’t going to tolerate the campaign trying to bog down progress on the bill by sticking in hundreds of pointless petitions. The Committee also severely limited what one of the remaining anti Hs2 groups (Hs2aa) could petition about.

This left the two surviving groups almost redundant. So much so that Hs2aa have given up campaigning on social media. Their Twitter and Facebook accounts haven’t been used since June 12th and their website is pretty much abandoned too. It’s carried 4 articles since June, most of which are repeating newspaper stories. Their campaigning is reduced to funding an advert to be rolled out in a few ‘periodicals’ (so, not the national newspapers then) before the Tory party conference next month and err, that’s it…

Meanwhile, the Stophs2 group is hanging on by the skin of its teeth despite the fact it’s a pointless organization with little to do. Like Hs2aa, its website is mostly kept alive by repeating what the media are saying about Hs2 or recycling old articles from the past, otherwise there’s nothing happening. The days of meetings, conventions and organising protests are long gone. This year they’ve not even attended any of the party conferences, so we’ve been saved from the usual fairy stories about how ‘busy’ their stall was – which is always contradicted by people tweeting pictures of it!

What’s instructive is taking a look at their Facebook page. On it you’ll find the same few names constantly expressing their bewilderment. They simply can’t understand why Hs2 is still happening. However, when you read through the comments and see the sheer level of ignorance about transport, economics and politics being expressed – you can see why they failed. The comments are overwhelmingly from those living on the route howling in incomprehension at everything. Their unguarded comments make it clear most of them have given up the fight, all they’re doing now is moaning about the result.

So, where do things go from here? It’s clear the stop Hs2 campaign’s been a miserable failure. Tactically it’s been a disaster. It never understood that a few hundred people affected by a specific issue like Hs2 would struggle to get wider public support. Pretending some negative opinion polls would somehow translate into anything concrete was a huge mistake – as was incessently painting politicians (the very people they needed) as corrupt. Trotting out a constant stream of lies, deception and dodgy figures wasn’t too bright either.

The anti Hs2 campaign was probably the first major one of the social media age, so it holds a lot of lessons for others. What it’s taught us is that social media is very much a double-edged sword for such campaigns because it exposes your weaknesses just as much as it allows you to get your message across to people. Social media has allowed us to see that the stophs2 campaign was actually a tiny group of people that was shrinking as time went on. It also showed that many of its ‘supporters’ were opportunists from the economic right wing such as the Taxpayers Alliance and the Institute for Economic Affairs, plus UKIP. We can see from Facebook that their campaign stalled years ago. It’s never attracted more than a few thousand people at most. Only a tiny percentage of that few thousand are in any way activists. Twitter paints an even worse picture as it’s clear from the activity surrounding the #hs2 hashtag that there’s been a massive drop in people tweeting anti H2 messages. To make matters worse, the majority of those remaining are either from the political fruitcake end of the spectrum or are tweeting anonymously (which is a complete waste of time). That leaves a handful of ordinary people. As a campaigning tool to stop hs2 it’s useless. Instead, what it has done is expose another of their weaknesses – which is that apart from their ‘heartland’ in the Chilterns, they’re scattered and isolated.

The phase 1 campaign is effectively dead. Royal Assent (which is only a few weeks away) is now certain. The last hope for their campaign was that the reconstituted Tory government would have a change of heart after Brexit. That hope was dashed when it became clear that Teresa May, her new Chancellor and Transport Minister strongly backed hs2. Added to this was the delicious irony that the brexit vote made building Hs2 crucial to the Governments efforts to boost the economy. So much for UKIP (who claimed Hs2 was a dastardly EU plot that was imposed on us) support for the antis! Once phase 1 gets Royal Assent Hs2aa (which is almost exclusively made up of Chiltern Nimbys) is redundant, as is Warwickshire based & funded Stophs2. I can’t see either of them surviving into 2017, which leaves the stop hs2 campaign without any national leadership or structure.

Now the ‘battle’ moves on to phase 2 and phase 2a. So, what’s the state of play on those sections of the route?

Phase 2a to Crewe passes through Staffordshire where the anti Hs2 campaign’s always been a bit of a joke. They’ve spent more time fighting each other than trying to stop hs2 due to the egos and ‘personalities’ involved. Think of Monty Python’s ‘Life of Brian’ and the ‘splitters’ of the Judean Peoples front…Right now there’s not even an established group in Staffs to oppose phase 2a. UKIP support featured heavily in Staffs, but now that party is in decline there’s little to suggest there’s ever going to be coherent opposition to Phase 2a.

Phase 2 is a little more complex. The leg from Crewe to Manchester and the spur to the WCML near Warrington has very little opposition apart from a moribund group of Nimbys in Mid-Cheshire and another around Warrington. What’s significant is that there’s not a single organised StopHs2 group anywhere in the Manchester area. The other leg through Sheffield to Leeds has more opposition due to the recent route change. That said, there’s little that’s coherent. Leeds has a tiny and disorganised group in the outskirts to the South-East. There was a group at Church Fenton, but again, that’s done very little. There is new opposition centred around Rotherham but they seem hell-bent on running a carbon-copy of the failed phase 1 campaign. Instead of concentrating their efforts on route changes or mitigation they’re wasting their time trying to stop the whole Hs2 project. The problem all these groups have is political support for Hs2 is far stronger in the North than it was in the South. Even though some Yorkshire MPs like Ed Miliband have expressed opposition to the route change, they still support building Hs2. This means there’s no chance that there will be a rebellion of MPs to vote down the Hs2 Phase 2 Hybrid Bill when it gets to Parliament. Of course, all this is several years away but what is increasingly clear is that Stophs2 as a national campaign is finished.

To add to the doom and gloom for the stophs2 campaign, Labour’s Shadow Chancellor made an announcement at today’s Labour conference. He committed the party to borrowing to invest in an infrastructure fund. He specifically mentioned that both Hs2 & Hs3 would be built from these funds. Now, you can offer odds on the chance of Labour ever getting back in to power before Hs2 is built, but what matters is Labour’s clear commitment to the project. They’re not going to be voting against either the Phase 2a or Phase 2 Hybrid bills…

Today I attended a rather different event – the twinning of two of Yorkshire’s station friends groups. Mytholmroyd (W Yorks) and Bentham (N Yorks) are two well established groups that have deep roots in their local communities. The lines they’re based on couldn’t be more different. Whilst Mytholmroyd has 70 trains a day serving it, Bentham has a grand total of 10. Despite the disparity of services, the groups have a lot in common. They’ve got to know each other so well they decided to twin to reflect these links, encourage greater co-operation between station groups and to share best practice. Hopefully other friends groups will be encouraged to do the same.

The first of the twinning events was held today at St Michaels church in Mytholmroyd. This church was so badly damaged by the terrible floods on Boxing day 2015, that much of it is still under repair and will be out of action for another year.

The event was well attended and included both the local mayors and community representatives as well as Northern, the local train operator.

Here’s a few pictures from the event. 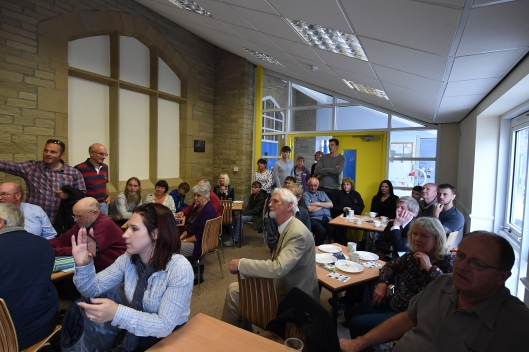 Representatives of both station groups and the wider community attended the event. 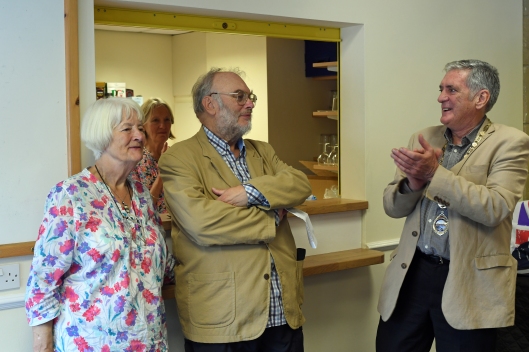 Cllr Tony Hodgins, Mayor of Hebden Royd, led the audience in a round of applause for Sue & Geoff Mitchell who are the powerhouses behind the Mytholmroyd station friends 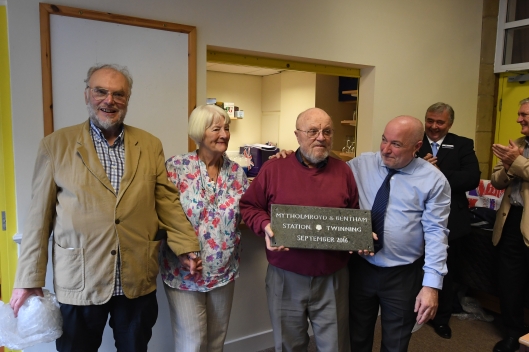 To commemorate the event, Two of the friends of Bentham (Bob Sloan & Gerald Townson) presented Mytholmroyd with a slate plaque to adorn the station.

Well, what year it’s been so far. I’m hard put to think of another in recent memory that’s been as tumultuous, both socially and politically. Not only have we had the Brexit vote, we’ve had a change in political leadership and watched as both Labour and UKIP are tearing themselves apart. UKIP I don’t mind – I’d be glad to see the back of them. Labour are more important as they’re meant to be providing the real opposition to our rebranded Tory government, instead it looks increasingly like Corbyn will win the leadership vote to take the party forward into electoral oblivion.

At least we had the Olympics to cheer us up momentarily as Britain did very well in the medal tables. That gave the media chance to distract us from the slew of less than brilliant economic news. Despite the fact there’s so much going on I’ve had little time to blog about any of it. Instead I’ve been concentrating on my work and getting some of the thousands of old rail and travel slides I have sitting in albums scanned and available through my website. Even this is having to take a back seat now. August is always a busy month and much of it has been spent touring the country in my role as a Judge for the Association of Community Rail Partnerships (ACoRP) annual awards. Along with my fellow judge from the Royal Horticultural Society (RHS) we’ve been visiting stations across the country to assess the entries for the ‘It’s your station’ category. As if that wasn’t enough, as soon as the visits were complete I began another marathon – this time for RAIL magazine. Every two years I’m tasked with travelling the network for a week, looking at the good, bad (and even ugly) sides to the UKs railways. In the 12 years I’ve been doing this series I’ve visited most corners of the UK, but this year was a little different. I travelled from one end of the country to the other by taking a meandering route from Penzance to Wick. You’ll be able to read the full story in RAIL later this month.

September isn’t exactly a quiet month. I’ve a series of events & awards ceremonies to attend, including the ACoRP awards in Southport and the National Rail awards as well as the massive Innotrans trade fair in Berlin, Germany. I’m determined to fit in some more blogging in between, so watch this space