March has been a busy month for the railways. We’ve had new franchises launched, the arrival of the first of the next generation of Intercity trains & the start of new electric train services in the North West. There was another major milestone, but that’s not attracted the same level of attention. I’m talking about the completion of the £280 million rebuilding of the 86-mile GNGE ‘joint’ line which runs from Werrington (just north of Peterborough) through Spalding, Sleaford, Lincoln and Gainsborough, reconnecting with the East Coast Main Line at Doncaster.

History
The Great Northern Railway and its rival the Great Eastern Railway established the Great Northern and Great Eastern Joint Railway in 1879, with the final section linking Spalding & Lincoln opening in 1882. The main purpose of the route was to allow Yorkshire coal to be brought to East Anglia, although the line was also used by a rather sparse passenger service which remains little changed to this day. Throughout the BR years the line went into steady decline, losing much of its importance (and freight) when the section from Spalding to March closed in November 1982. At one time, much seasonal traffic was generated by the Spalding bulb festival with excursion trains arriving in the town from all around the UK. Now, even the sidings these trains were stabled in have disappeared.

The lines fortunes changed after privatisation when the railways stopped contracting and began expanding once more. Network Rail undertook a review of lines & decided to upgrade the GNGE as part of its East Coast Main Line Capacity Relief Project, providing an alternative route for both passenger & freight services.

The GNGE Alliance & work programme
To carry out the upgrade Network Rail formed an alliance of partners which comprises Network Rail, Babcock, Carillion and Siemens. Other companies such as May Gurney worked in sub-contracting roles, supplying their expertise to the Alliance

The intention was to increase line capacity, raise speeds from 60 to 75 mph and increase the loading gauge to W10 in order to allow the line to be used as a diversionary route by the growing number of intermodal trains traversing the network. Previously, these trains had been barred from the line. In the end, the Alliance managed to raise the loading gauge further to W12 at no extra cost.

To achieve this needed the following work:

Level crossings: This saw the largest ever level crossing replacement programme of its type on the national rail network, with all of the GNGE route’s 147 level crossings individually risk assessed to determine specific requirements, leading to the renewal/enhancement of 61 level crossings along the line of route & the closure of 3 more. Crossings have been converted to manually controlled barriers with object detection (MCB-OD) operation or MCB- CCTV controlled operation. The work allowed some permanent line speed restrictions to be lifted.

Track: 83,000 yards of plain line renewals, which entailed replacing wooden sleepers & jointed track with concrete sleepers & continuous welded rail. 70,000 yards of rerailing. Replacing dozens of switches & crossings (for example, the junction at Sleaford North). The re-instatment of double track on the Sleaford avoiding line by renewing & reconnecting the previously abandoned Down line. One of the many upsides to this work is that its reduced noise and vibration levels suffered by residents living close to the line as well as extending maintenance periods to 15 years.

Bridges & Tunnels: 49 underbridges, 19 overbridges and 82 culverts were either renewed or refurbished whilst track was lowered for 66 metres inside the sole tunnel on the line at Washingborough. One of the biggest jobs was at Sleaford, when 3 bridges (rail over road, rail over rail & rail over river) were replaced in one 10 day blockade.

The project was due to run from 2012 until late 2014 but due to the fact the line was an important diversionary route the timetable was extended into 2015. The landslip at Hatfield Colliery in 2014 had quite an impact on the programme as the diversion of traffic due to that event increased traffic levels on the joint line & forced some of the GNGE works to be rescheduled. A ‘wires down’ incident at Retford didn’t help as this also caused work to be postponed. Even so, a project that was originally planned as a four year scheme was undertaken in around half the time.

With a project of this size & nature it was vital to engage with the people & communities who lived along the route as some would suffer significant inconvenience. On one occasion this involved the Alliance laying on a minibus service to get people to & from their homes which had been isolated by a temporary level crossing closure. Another time a fire engine was hired & stationed near a row of houses cut off from the main roads – just in case! At another site the Alliance worked with villagers to cut trespass caused by people taking a shortcut across the line. A new pedestrian subway was cut through the embankment to allow safe crossing. This work wasn’t in the project scope but after consultations with residents it was decided to include it. At Heighington the Alliance donated £1,000 to help fund the restoration work at the Community centre.

All these legacies include significant environmental and community schemes which have enhanced the railway’s reputation as a good neighbour, as well as being beneficial in their own right. These and other initiatives led to the GNGE project achieving an ‘Excellent’ score of 78% in Civil Engineering Environmental Quality Assurance (CEEQUAL).

Huge effort was invested in engaging with schools to advise children of the even greater risks posed by trespass with the arrival of faster, quieter and more frequent trains. The Alliance’s Schools Liaison Officer made a total of 69 school visits and addressed over 15,000 children in all. These efforts were supported by a media campaign in newspapers, local radio and online.

The successful outcome of all this work means that, in future, not only could journey times be cut but operating hours can be extended. This means it could be possible to introduce something local Council’s have wanted for some time – the introduction of a Sunday service. Previously these would have been too expensive to achieve due to the staff costs of keeping 13 signalboxes open on extra shifts.

I was fortunate enough to be involved in the scheme as a project photographer working on projects big & small up & down the line. My intention is to include a series of pictures illustrating some of the work that was carried out on this important project which, to my mind, hasn’t received quite the attention that it perhaps should have. So, watch this space. Here’s a few to start with;

On the 9th September Transport Secretary baroness Kramer visited the line to see the work being done and officially open two important schemes. One was a new pedestrian subway, the other was the re-instatement of the Sleaford avoiding lines. Here’s the Baroness flagging off a DB Schenker loco fitted with a commemorative headboad. 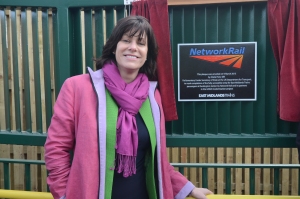 On the 9th March Transport Secretary Claire Perry MP had a busy day visiting the GNGE to see the completed works & talk to local stakeholders & the project team. One of her tasks was to unveil this plaque on the new footbridge at Ruskington. This has replaced a barrow crossing, making the station both safer and accessible to all.

After unveiling the plaque at Ruskington, Claire Perry MP travelled the line back to Peterborough in an inspection saloon. She was accompanied by Network Rail’s LNE route director, Phil Verster & GNGE Alliance staff who pointed out the work that had been undertaken. In this picture we’re passing Sleaford North Jn. The old signalbox still stands but it no longer controls the relaid junction & reconnected avoiding line. 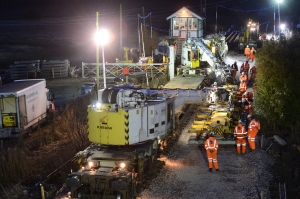 Over the weekend of the 2nd- 3rd February 2013 the junction at Sleaford North was renewed. The new switches were brought to the site per-assembled using Network Rail’s new tilt wagons. Here, a pair of Kirow cranes maneuver one of the switches into place. 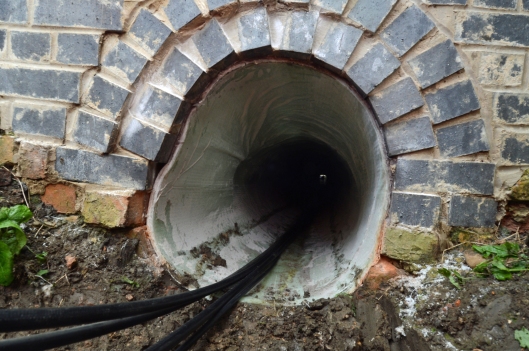 One of the problems with railway engineering is that the public don’t always get to see (and thus appreciate) where the money is spent on modernising & repairing our railways. Here’s a case in point…
In 2013 a series of culverts under the embankment near Stow Park were religned. These hadn’t been touched since the line was built in 1882. In some of them several courses of bricks has collapsed & needed to be replaced to prevent the danger of the embankment collapsing. In this health & safety conscious age there’s no question of sending men into such a confined space, so a more modern method was used to reline the culvert. Once debris had been removed a flexible liner was pulled through. Once in place, it was sealed at either end then inflated by compressed air in order that it pressed against the brickwork. Once this was done, a trolley equipped with UV lamps was run through the liner, baking it. The liner material then sets like concrete. It’s not a cheap fix. Depending on the size of the liner they can cost tens of thousands of pounds, but they’re guaranteed for over 60 years. Here’s one of the culverts after the work had been completed. 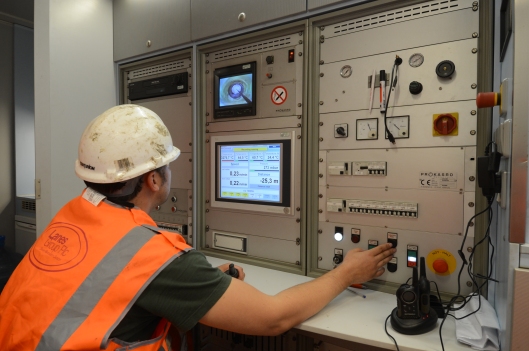 The culvert lining process was controlled from this van. Here, the operator can control & monitor the whole process, ensuring that the liner is baked at the right level & that the UV trolley has passed all the way through the culvert. The system also provides a print-out of all the relevant data to show that the work has been done correctly. 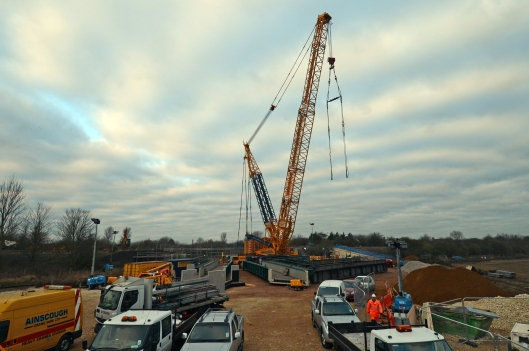 In March 2013 three different bridges on the Sleaford avoiding line were replaced during a 10 day blockade. Here, a 1000 tonne crane rests after lifting out the old rail bridge over the railway line to Skegness. In the foreground to the left of the old bridge you can see the two sections of the new bridge ready to go in. 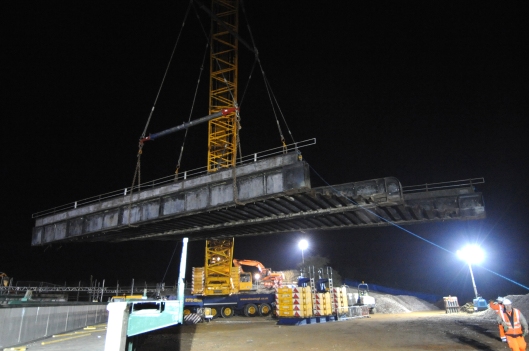 In the early hours of the 3rd March 2013, the old 90 tonne railway bridge that spanned the Skegness line is lifted out in one piece. 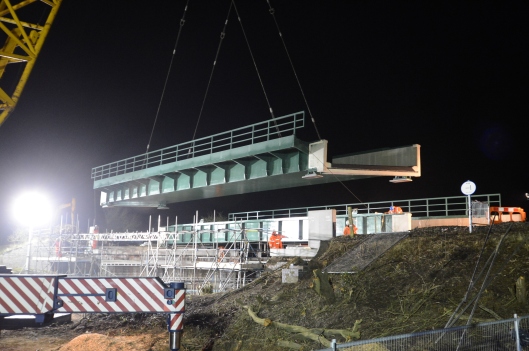 Once the old bridge had been removed & the site cleared & prepared the new bridge was lifted into place. This has been built in two sections (one for the Up line & another for the down line)