Despite my hopes I’ve not had as much time for blogging as I’d wanted, but here’s a quick update on Hs2 as we’ve had an interesting few weeks.

On November 15th the Government make the long-awaited announcement on the phase 2 and 2a sections of the route. These have now gone out for consultation. The only really contentious issue was the decision to adopt a change to allow Hs2 trains to run directly through Sheffield Midland via a loop off a section of Hs2 which has been shifted Eastwards through South Yorkshire. The announcements were greeted favourably by the vast majority of politicians (nationally and locally) and by the business community. As usual, the only fly in the ointment was getting the folks of Yorkshire to agree on anything! There’s currently a battle between the counties politicians as towns like Barnsley and Doncaster wanted the original Meadowhall route, whilst Sheffield had lobbied hard for a city centre route. A new housing estate outside Mexborough (Shimmer) has been caught up in the furore and provided an classic example of  just how disorganised, fractious (and deceitful) the Yorkshire StopHs2 campaign is. Some campaigners tried to claim that Hs2 wanted to knock down all 215 properties. Here’s the claim on the blog page on the website of one of the main Yorkshire groups.

There’s only one problem. It’s a complete fabrication. The Higgins report contains no such figure! Not only that, but H2 Ltd confirmed in an interview to the iPaper yesterday that the figure is actually 16, not 215 properties!

The article’s a very good example of balance and unsensational journalism that reveals not everyone on the estate is anti Hs2 – a fact often ignored by more sensationalist sources. You’ll see the same levels of division if you visit the Facebook pages of some of the Yorkshire Stophs2 groups. What comes across is that some people are using the campaign  as a vehicle for their 15 minutes of fame, leaving other residents feeling they’re doing more harm than good. The fact cracks have appeared so early, plus the inability of local politicians to agree, doesn’t bode well for the Stophs2 campaign in Yorkshire.

Worse news was to come on the national political stage with the news that the one party that’s really exploited the Stophs2 campaign (UKIP) is continuing to implode. They’ve lost yet another Leadership candidate, plus the EU is demanding back 400,000 euros in funding that UKIP have ‘misspent’ on UK campaigns. There’s now the delicious irony that Stophs2 and UKIP appear to be a race to see who can implode first…

So, who’s going to stop Hs2 now? No-one. Phase 1 will have Royal Assent within weeks. £900m of enabling work contracts have been let and work has already started on ground investigations and re-routing services. The consultations over the phase 2 routes will continue for a year or two now, but the political will behind the project remains steadfast and solid.

It’s going to be a cold, cold Christmas without any cheer for the anti Hs2 campaign.

Since the referendum result this country really has felt a surreal place. It’s been like one of those parallel universes so beloved of science fiction writers. You know, one of those places that (superficially) look and sound the same but have startling and unsettling differences. So, what was once an outward, democratic, fairly prosperous and socially liberal country was replaced overnight with one that was inward, xenophobic, illiberal  that had a whiff of fascism about it and that was happy to ruin its economy for the chimera of having ‘taken back control’.

Today, that division has been thrown into stark relief as the High Court has ruled that Parliament must vote on whether the UK can start the process of leaving the EU and that the government cannot trigger Article 50 of the Lisbon Treaty – beginning formal discussions with the EU – on their own.

This is clearly a victory for democracy. You would have thought Brexiteers would be welcoming the decision. After all, they campaigned for sovereignty, democracy and Parliament, for us to ‘take back control’.

Not a bit of it. Instead the rhetoric and threats have more in common with a fascist dictatorship. Here’s a few comments from Twitter.

But the ‘best’ has to be the Daily Mail comments. Take a look at these – and this is a mainstream newspaper for God’s sake… 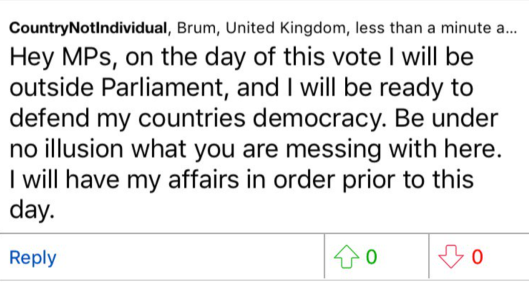 This is why I worry about the future of my country.

Yesterday the Yorkshire against Hs2 campaign launched a ‘report’ which claimed to have exposed Sir David Higgins and Hs2 Ltd of ‘telling lies’ to the Transport Minister in Sir David’s July 2016 report into altering the route through Yorkshire. Sadly, this report isn’t available anywhere on their website, or that of the groups they claim to be the umbrella for – or on the *cough* ‘national’ STOPHs2 website.

Here’s the Yorkshire against Hs2 website. The accusation is contained in the link to their blog page. It claims that;

Here’s a link to Sir David Higgins report.  So, where did the report ‘admit’ they would demolish all 215 homes on the Shimmer estate? Nowhere. The nearest you get is this, on page 22;

Spot the difference between the antis unequivocal “entirely demolish” and the far more measured “an impact” from Hs2 Ltd.

Yorkshire antis seem to have forgotten another of their claims which they tried to plaster all over the media earlier. This was a claim that Hs2 Ltd had admitted in a FOI request that they had no idea how many homes were to demolished on the revised Yorkshire route (see link)! Oddly, this FOI request has never been published by the group who claim to have received it (Bramley) or by Yorkshire against Hs2. In fact, no FOI requests have been published. The irony of anti Hs2 groups not publishing Freedom of Information requests and replies but keeping them secret is obviously lost on them!

Someone is telling porkies here, and it ain’t Hs2…

I mentioned in an earlier blog that the Yorkshire Stophs2 campaign’s doomed to failure as they’re singing from different hymn sheets from the beginning. This is very evident from the plethora of petitions different groups have started – with different aims. For example, here’s one started by one Julie Pile, which says that: 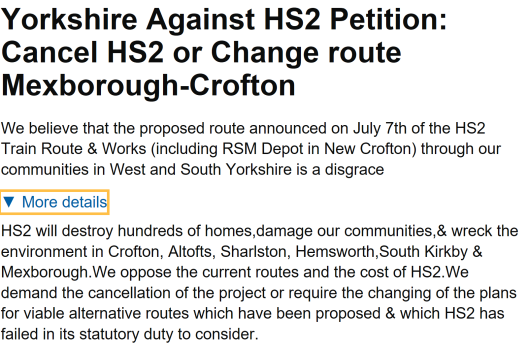 Apart from the obvious nonsense about failures of “statutory duty” and the usual catastrophic language about “wrecking” the environment, it’s clear Julie doesn’t mind if this happens, as long as it happens elsewhere. This puts her on a collision course with other campaigners on the route, but also the City of Sheffield and other who campaigned long and hard to have the Hs2 route changed from Meadowhall in the first place. So far, the petition’s gathered 3343 signatures, 1643 of which (or 50.85%)are from the Hemsworth constituency of Jon Trickett MP. To put this in perspective, it’s just 1.73% of all his constituents. The only other people to have signed in any number are the 418 signatures from Ed Miliband’s neighbouring constituency, Doncaster North. What’s noticeable is the tiny number of supporting signatures from elsewhere, like Sheffield, or even Rother Valley, another constituency on the new Hs2 route.

There does seem to be an embarrassment of riches (well, petitions really) amongst people in Yorkshire as a John Haith, a Rother Valley resident from Bramley has started this one, which has 3,202 signatures (but little support from Hemsworth). Meanwhile, Stephen Simcox (also Rother Valley) has started a “spend Hs2 money on the NHS” petition which has a paltry 763 signatures.

In truth, none of them have a cat in hell’s chance of success, but they do show a very Yorkshire trait – a lack of agreement over anything! The fact that there are obvious tensions and different interests across the county (even amongst anti Hs2 groups) demonstrates why any campaign to try and Stop Hs2 is doomed from the start – especially as these small local groups are pitted against the metropolitan areas of Leeds, Sheffield and York (all very pro Hs2) as well as the majority of the wider Yorkshire business community. Plus, can anyone seriously think the good Burghers of Doncaster (home to one of the two National Colleges for High Speed Rail) will want to kiss goodbye to the thousands of skilled people who will be trained there? Or for that matter, the hundreds of skilled jobs that will be created by the Hs2 rolling stock depot at nearby Crofton?

No doubt there will be a few awkward moments for some MPs as they try and balance the wider interests of their constituents with the impossible demands of a minority, but does anyone seriously think they will actually vote to stop Hs2 coming to Yorkshire or carrying on to the North-East, or for that matter Notts?

There’s another consideration too. The Hs2 Hybrid Bill for phase 2 will also contain the line onwards from Crewe to Manchester (another Labour heartland).  I’m sure there will be some very interesting meetings of the Parliamentary Labour Party if a handful of Labour MPs in Yorkshire were seen as putting the whole of the Phase 2 scheme under threat!

StopH2 campaigners in Yorkshire have made the same mistake that those on Phase 1 did. They’ve fallen into the trap of thinking their purely local concerns should be put ahead of national ones, and that others will give way to appease them.