I’ve been busy scanning old slides today, trying to make a dent in the 1000s that I have sitting in albums which have never seen the light of day since I took them. They never made it onto my old website due to time constraints. Now, I look back at them and remember the old Joni Mitchell song ‘Big yellow taxi’ and the lyrics that “you don’t know what you’ve got till it’s gone”…

The selection of slides that I’ve been scanning date from June 1995. I reckon they’re from when I took a break from London and headed back to base myself with my family in Southport in order to travel the North-West. The picture that really caught my eye was taken in Hexham. It wasn’t about trains but semaphore signals – and this one in particular. Now, I’ve always enjoyed the beauty and variety of railway semaphores, and as an old railway volunteer I’ve climbed a few in my time. But I’m not sure I’d have fancied spending much time up this example.

This particular signal’s long-gone – although I couldn’t tell you the date it disappeared. What strikes me about it is the height. The photograph’s taken from the station footbridge which is the reason the signal was so tall – it needed to be seen by trains approaching it. I don’t know the exact height, but it must be a good 25 ft tall. In a concession to late 20th century safety standards, there’s a (partial) cage around the ladder but little to protect you on the platform at the top.

Cast your minds back 60 years or less when the oil lamp that illuminated this signal would be needed to be changed every day – come rain or shine. A lamp man or signalman would climb this ladder twice a day. I’m sure it gave great views, but can you imagine standing up there in winter (on slippery wooden slats, in rudimentary PPE, with no harness) when it’s either chucking it down or blowing a gale and the post is swaying like a drunk on the way back from the pub? No wonder so many railwaymen were injured in the course of their careers. Here’s an example from Banbury, taken in 2010. These semaphores are gone too, they were replaced in 2016. 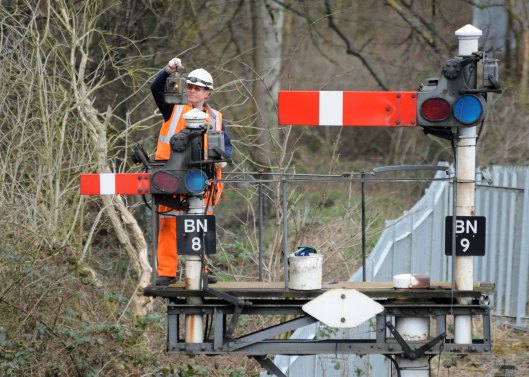 The irony for me was that the very day I was scanning the Hexham picture the modern railway was talking about the ‘digital railway’ which has the chance to do away with this signal’s replacement & get rid of ‘lights on sticks’ completely.

Meanwhile, for nostalgia buffs, here’s a close-up of the old signalbox that you can see in the background. Unlike the semaphore it’s grade 2 listed. It was built by the North Eastern Railway around 1896. It will live on beyond its useful life, but many of its brethren are living on borrowed time… Now, contrast that signal with one of its modern replacements. There’s no paraffin lamps, there’s no ladders. You don’t climb to the signalhead, the signalhead comes to you! This example is at Halifax, where the line through the Calder valley was resignalled in October 2018, abolishing three signalboxes.

Whilst waiting for my train at Sowerby Bridge the other day I noticed this new signal had appeared on the Up Main.

If you’ll pardon the pun, it’s signalling more than trains – it’s signalling the end of absolute block working between Hebden Bridge and Milner Royd Junction, the last remaining patch of AB working on the Calder valley route in 2018. Both signal boxes are due for closure in the autumn. The future of Milner Royd (one of only two surviving Smith and Yardley boxes) is uncertain, but Hebden Bridge, (built by the Railway Signal Co) is a grade 2 listed building so will survive. Here’s a couple of pictures of the boxes concerned. Photograph them whilst you can!

Hebden Bridge Signal Box was built by the Railway Signal Co to a standard design in 1898. It contains a 38 lever frame and L&Y block instruments.

Two other boxes are also due to close, although neither are actually in the Calder Valley. They’re Halifax and Mill Lane, Bradford. Two other boxes have already closed this month. Huddersfield and Healy Mills functions have been transferred to York ROC.

One of the last outposts of traditional semaphore signalling has heard its death knell today. Siemens Rail Automation has been awarded a £40 million contract by Network Rail to renew life-expired signalling equipment from Leamington Spa to Heyford. This will see the signals & signalboxes at Banbury North & South replaced by Siemens’ Trackguard Westlock computer-based interlocking. The modernization will mean improved headways between Banbury and Aynho Junction, as well as a rationalised layout at Banbury Station to improve operational flexibility and minimise on-going maintenance requirements.

The project is expected to take 22 months.

Banbury has long been an oasis of former GWR lower quadrant semaphore signals, although some were converted to upper quadrant by BR. Some of the signals were still illuminated by paraffin lamps, a practice dating back to the dawn of the railways. Here’s a selection of pictures showing what will disappear: