Yesterday I was in Crewe to attend the launch of a new report into how the Midlands and North-West can unlock the economic and transport opportunities presented by phase 2a of Hs2 which is due to reach Crewe by 2026. The report was commissioned by the High Speed Rail Industry Leaders group (HSRIL). You can download it from the website via this link. 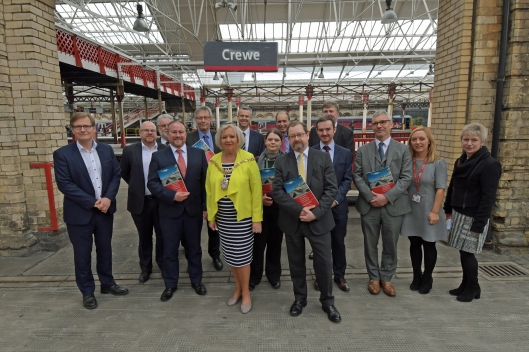 The report outlines how, when Sir David Higgins became Hs2 Ltd’s Chairman in 2014 he suggested accelerating Phase 2, bringing the line to Crewe 6 years earlier than planned (to 2027 from 2033). This resulted in the Government agreeing to bring forward a second Hybrid Bill for what became known as Hs2 Phase 2a. In January, the bill passed 2nd reading by an overwhelming majority (295 to 12 against).

Another chapter of the report deals with the Crewe Hub scheme, which was agreed by the Government in March 2018. In the past there were several different proposals for Crewe. At one time Network Rail were suggesting building a new station further South on the site of the Basford Hall marshalling yard. This met with local political opposition.

In July 2017 the Government published a consultation on the idea of the Crewe hub. The outcome was published on March 9th

Now the Crewe hub scheme has agreement from all sides. It doesn’t form part of the Hs2 Phase 2a Hybrid Bill, instead it’ll be created through a partnership of Network Rail, Cheshire East Council and Cheshire and Warrington Local Enterprise Council (LEP).

The plan is to create a strategic interchange that will allow the whole of Cheshire, North Staffordshire, North Wales and the Mersey-Dee area to benefit from Hs2 at the earliest opportunity. In total, this sub-region has a population of more than 1.5 million whilst around 5 million live within an hour of the station. It’s worth remembering that by 2013/14, Crewe accounted for more London-bound passengers than Warrington, Stafford, Chester or Stafford, yet the facilities don’t measure up. In 2016-17 the station was used by 3.086 million people, plus an additional 1.476 million interchange passengers.

The redesigned station would allow 400m long Hs2 trains to divide and join at Crewe. Service plans aren’t yet finalised but options suggested are for one set serving Lancaster/Preston and another Stoke-on-Trent (and possibly Macclesfield, Stockport and Manchester) to split/join at Crewe, thus only using one Euston path instead of two.

The locations for the 400m platforms are on two sites. One would be an extension of the existing platform 5, the other proposal would be a platform on the Manchester Independent (freight) lines to the West of the existing station although Network Rail are  examining if reinstating the old platform 13 would be an affordable alternative as this would address concerns by freight operators worried that paths through the area may be lost.

In order to link the different sites together and make the station a modern gateway to the town the plan is to build a transfer deck across the site. Grimshaw Architects have been looking at a design for the new station which will keep and enhance the historic parts of the site whilst sweeping away much of the later clutter. At the moment station access is limited and causes traffic congestion as most people use the entrance from the Nantwich Rd over bridge which is a busy link road and the only one across the site. Station car parking is also an issue as the main station car-park is North-West of the site, where the old Crewe North Loco shed was. The plan would include moving this to the Eastern side of the station in a new multi-storey car park, freeing up the Nantwich Rd bridge for other traffic. The transfer deck would create a new link from Weston Rd on the East and (possibly) Gresty Rd and the Crewe Alexandra football ground on the West.

After the launch, guests were given a guided tour of the station to see what works were proposed.

The consultation also agreed a change to the design of the southern connection from HS2, so that HS2 joins (and takes over) the central two lines on the existing network.

The report also mentions that a junction north of Crewe, enabling HS2 trains to call at Crewe and then re-join the HS2 main line, as part of Phase 2b would be needed to allow Crewe station to support the Constellation Partnership’s ambition of 5–7 HS2 trains per hour calling at Crewe and frequencies of 3-4 trains per hour on each of the regional links.

Included in the report are details of the economic appraisal. 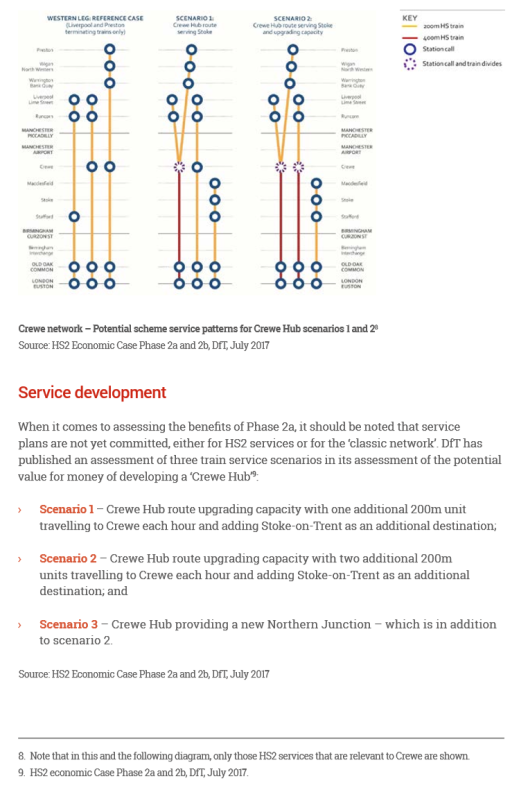 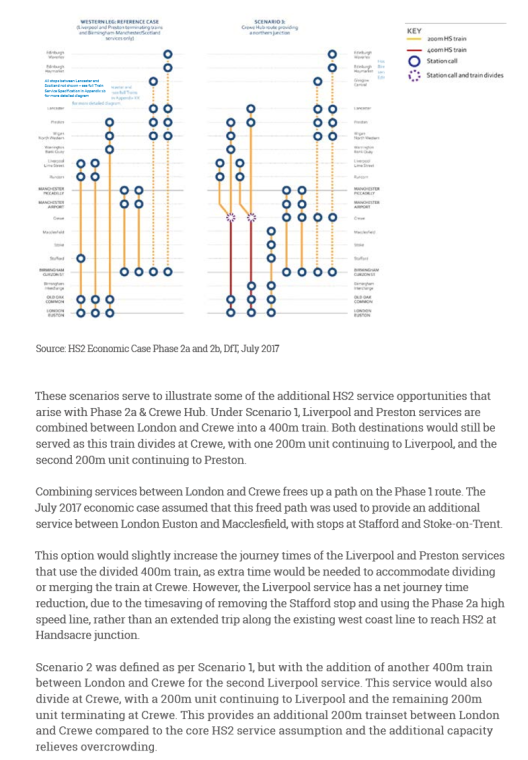 I’m not going to go into all the economic data contained in the report as I’m concentrating more on the rail aspects, but it does contain details of the Northern Gateway Development Zone and business opportunities and development as well as plans to create 100,000 new homes and 120,000 jobs.

The report’s a useful document for drawing together the ambitious plans for the Crewe hub and the benefits Hs2 phase 2a brings, not just to Crewe but also to the routes that radiate from the station. Work is expected to begin and be funded from Network Rail’s control period CP6 (2019-2024) as most of what is proposed is within the existing railway footprint.

It’s great to see that, after all the years of wrangling over the future of the station, Hs2 has provided a catalyst that’s brought the parties together around a firm proposal. As someone who’s known Crewe station since the early 1970s and watched its decline all the way through the 1990s to the present I’m looking forward to the new plans coming to fruition.