I’m here in Derby for the launch of the new East Midlands rail franchise, which sees Abellio take over from Stagecoach, who’ve run the franchise since 2007. There’s lots to look forward to in the new franchise, which includes a replacement their train fleet with either brand new or cascaded trains. There’ll be lots of events happening throughout the day which I’ll blog about here…

EMR are kicking off the new franchise by giving out free cupcakes to passengers at many of their major stations. Here’s some of the folks at Derby. 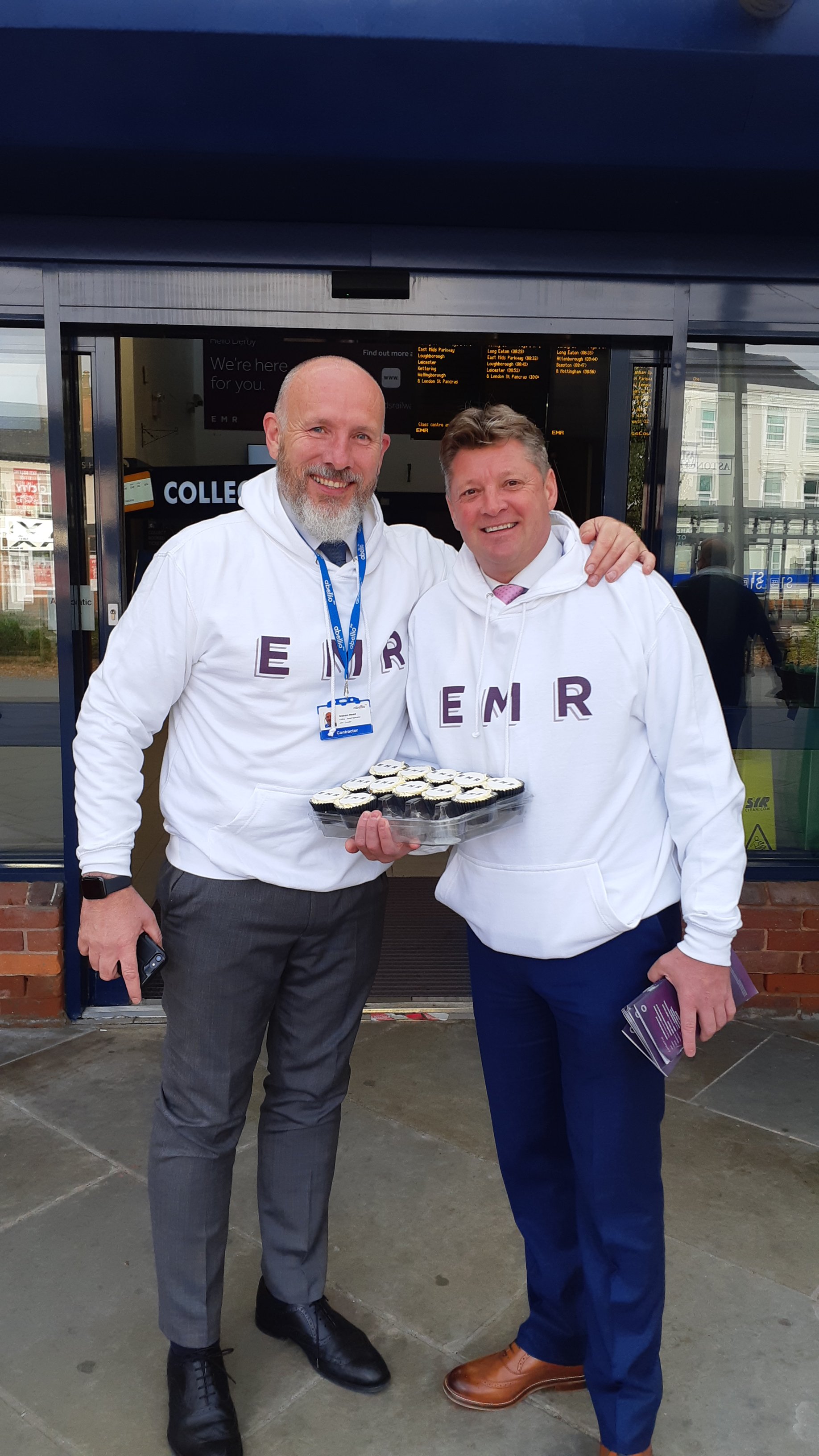 The trains are being rebranded with two separate identities – Intercity and Regional. Here’s one of their Class 153s at Derby. These units will be replaced by larger trains cascaded from other franchises. 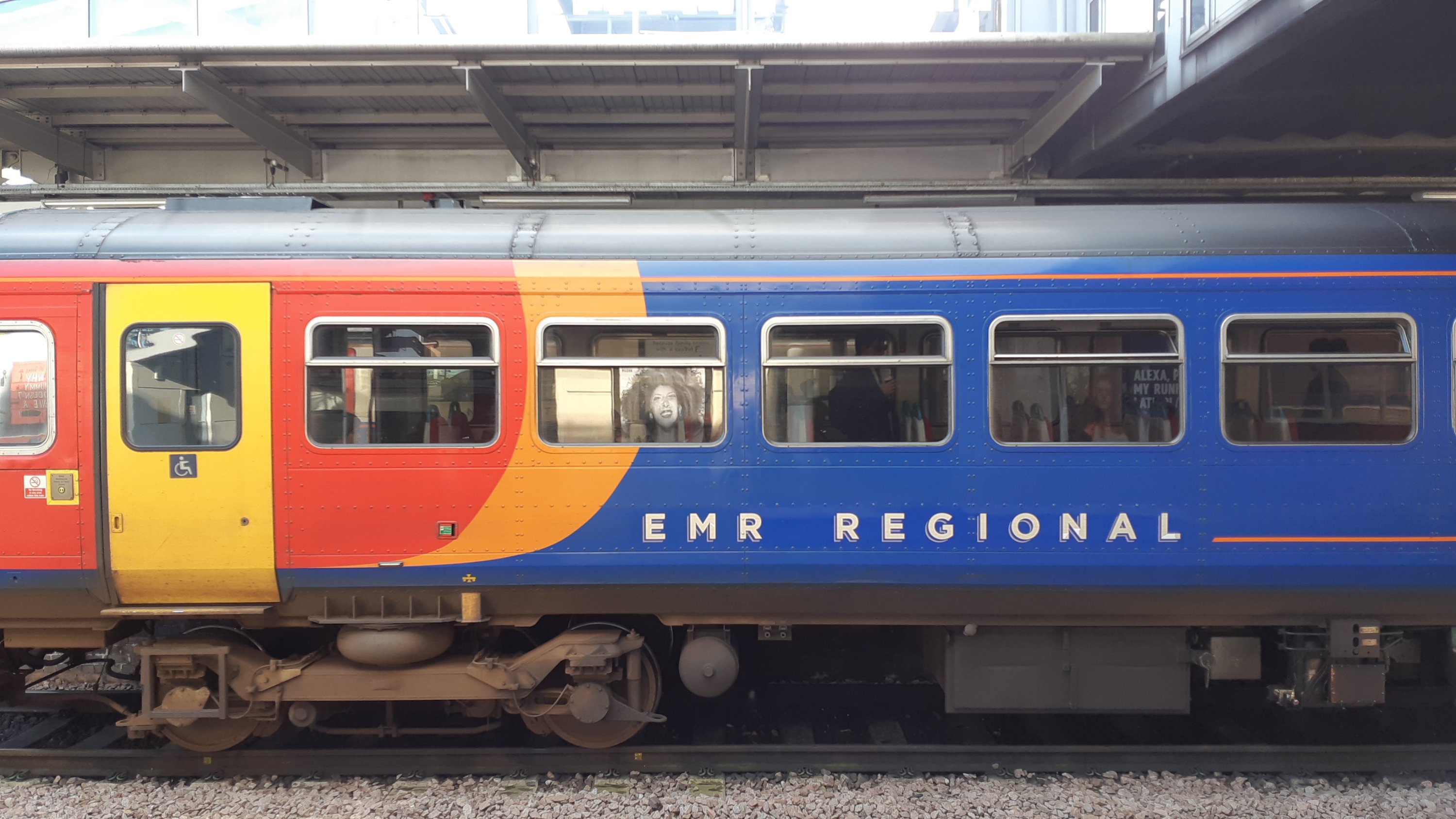 This is how the Class 222s look. All these trains will be replaced. EMR have ordered 33 five car bi-mode units from Hitachi at a cost of £400m. 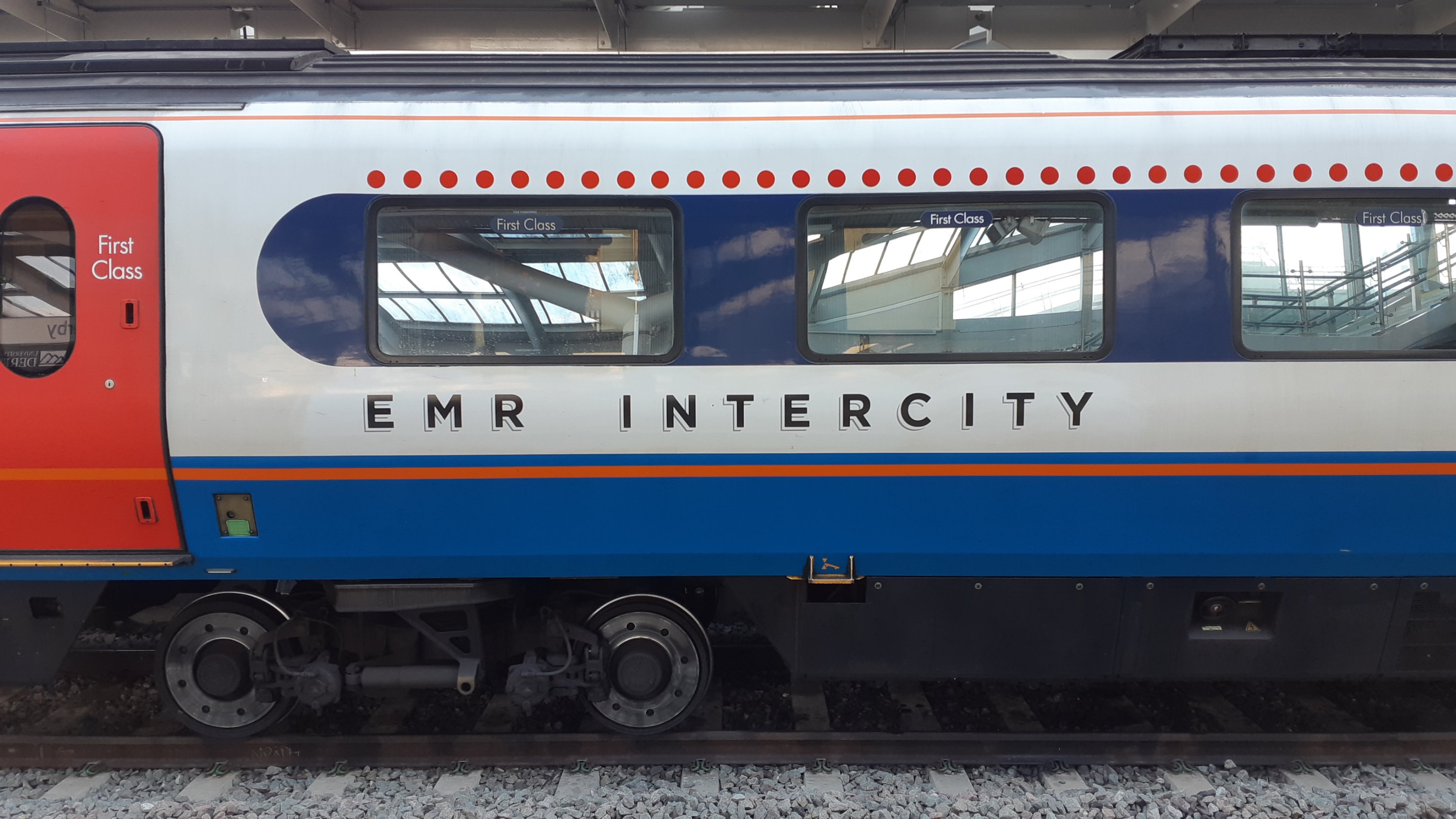 It’s been a very busy day with launches at bother Derby and Nottingham. Now the re-liveried train is on it’s way to London, couple up on the rear of a normal service train. The main launch event was held at the Roundhouse opposite the station, with speakers from Abellio, EMR, Network Rail, Transport for East Midlands and also the Dutch embassy. Here’s few shots from the day so far.


19:29.
It’s been such a busy day I’ve really not had time to blog. After the events at Derby and Nottingham we travelled on the rebranded train to London where there was a final stakeholder event at St Pancras. The train attracted a lot of attention from enthusiasts whilst the launch was busy with the mainstream media who were willing to pick up and run with a good news story. Let’s face it, a £600m investment in the new franchise is certainly that!
After the event was over and my job was done I wandered over to Euston to have a look at progress on HS2. The  demolition phase is well underway now and it won’t be long before it’s completed. Even the big tent that covered the old graveyards starting to come down. I’ll add a few pictures later.

I headed back North up the Midland Main Line as I wanted to get shots of progress on the route rebuild so I stopped off at Wellingborough where the 4th platform’s being reinstated. 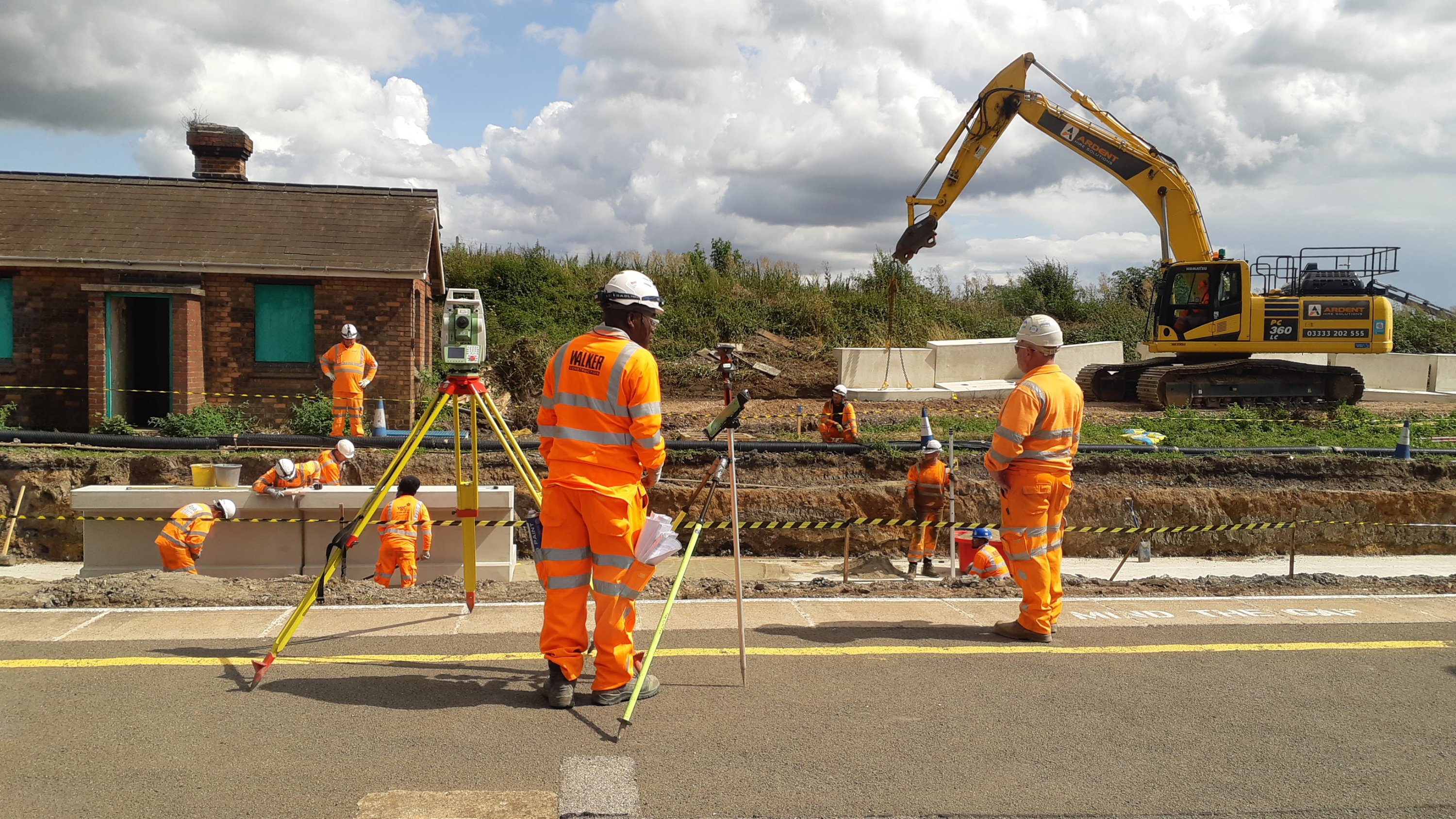 Of course, the irony of all this is that Network Rail are having to spend vast sums reinstating infrastructure that British Rail ripped out in the name of rationalisation and balancing the books…

After Wellingborough I made a brief stop at Kettering where I transferred to a Sheffield bound service. Sheffield’s where I am now, waiting for Cross-Country’s 20:21 to take me to Leeds.

My Cross-Country service turned up on time and I was pleasantly surprised to find that it was worked by one of their HST sets – only this one’s had the slam doors replaced by automatic ones. They certainly seem to make a difference to the ambience inside the vehicle. To my mind it seems quieter and without the same pressure pulse when you enter tunnels or pass other trains. You still notice passing but it doesn’t have the same impact on the ears! Unfortunately, a family travelling in my coach with a young child have undone any benefit…

I’ll add a few more pictures from today’s events later or in the morning.  I’m posting this from my mobile so don’t have the facilities. I’m looking forward to having a day working from home tomorrow as I’ve a shedload of pictures to edit and get out to clients in readiness for the next jobs.

Back to earth with a bang! My final train of the day is Northern’s 21:08 from Leeds to Brighouse and it’s being worked by a rather tired and unrefurbished Class 150 – my least favourite train. Actually, the train’s going to Huddersfield, but they don’t display that on the screens at Leeds in case folk get the wrong (slower) train!

05:13.What a time to be alive! Well,out of bed anyway, I’m getting ready to head off to judge the ‘It’s your station’ category for the 2019 ACoRP awards. Over the next two days Mark and I will be visiting 9 different stations across the territory of train operator East Midlands Trains, starting at Longport at 08:39 this morning. Stick with me and see where we get to before ending up in Derby tonight…06:22.It’s a glorious summer morning but with just the right amount of post dawn chill to make the walk down to Sowerby Bridge a comfortable rather than a sweaty experience. I’ve caught the 06:21 Leeds to Chester to get me as far as Manchester Victoria. Today an unrefurbished 3-car Class 158’s been allocated to the service. 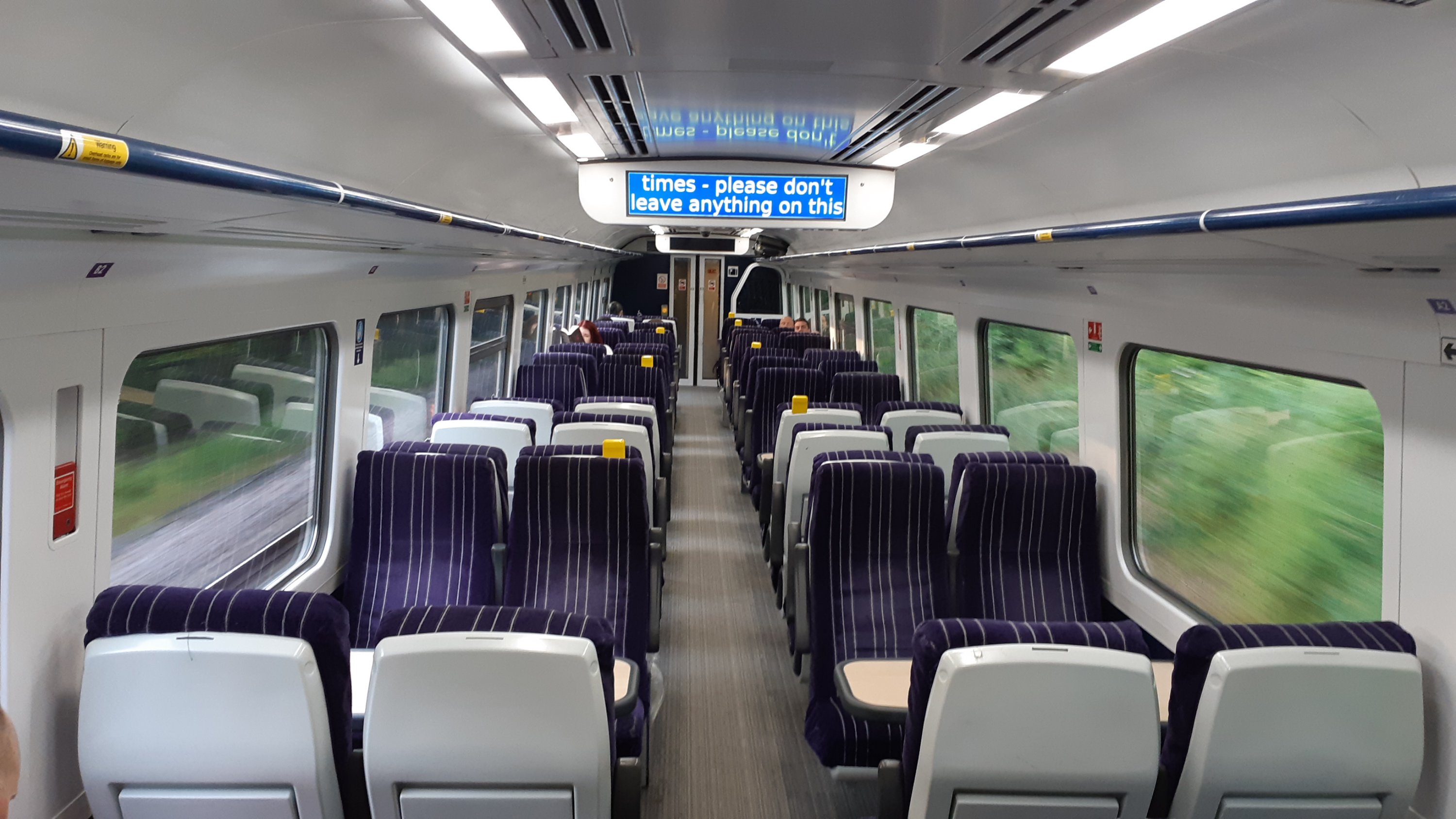 Unsurprisingly, it’s fairly lightly loaded at this part of the journey but it certainly won’t stay that way.06:55.As expected, after stops at Hebden Bridge, Todmorden and Rochdale my train’s half full in this carriage, not bad for the first service of the day! Now we’re trundling the last few miles into Manchester because we’re following another service. As we pass Northern’s Newton Heath depot I can see the civils work that’s happening to build the new shed which will be dedicated to maintaining the new CAF trains. The shed’s being built adjacent to the main line. Ironically, it’s kn a patch of land I remember being used as dump fir old DMU cars awaiting scrapping back in the 1970s. Now it has a more productive use!07:30.On arrival at Victoria I did my usual mad dash across the city centre to Piccadilly station. The city’s just beginning to wake up. Many of the poor souls who’re homeless are still asleep- and who can blame them? Sleep’s a steess-free release from the wretched situation they find themselves in. 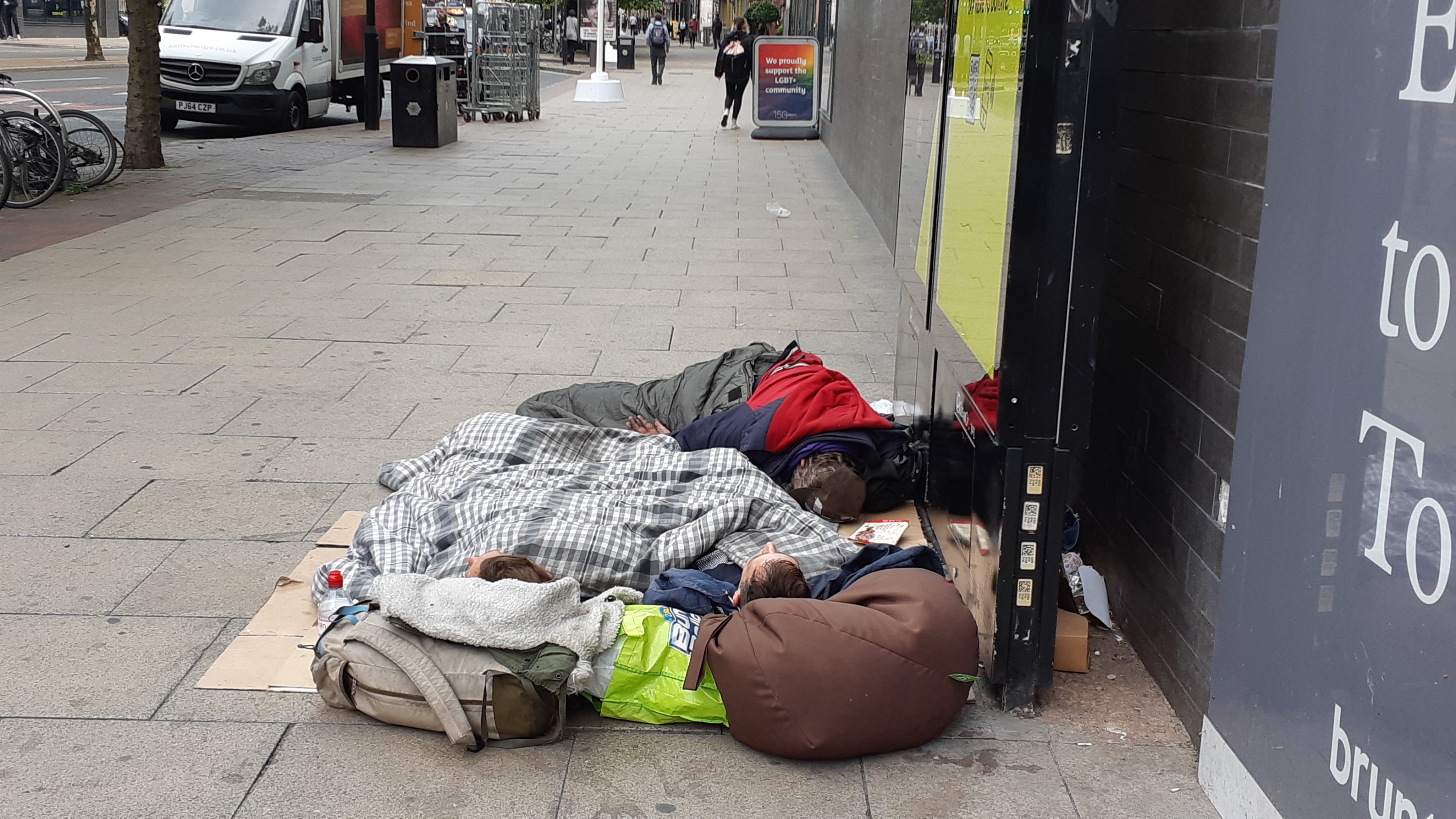 It breaks my heart to see scenes like this in so many UK towns and cities. After a decade of politically enforced ‘austerity’ (well, for some) the problem’s exploded and it’s only going to get worse whilst those billionaires, spivs and self-entitled toffs who’re trying to foist a no-deal Brexit upon us are in such positions of power and influence. Any Brexit will harm the economy, but they really don’t care as they pursue their own selfish political and financial interests.07:37.My sprint got me to the station in time to catch an earlier train. Cross-Country’s 07:27 to Bournemouth. It’s worked by a 4-car Class 220 (017 for the number crunchers) and it’s rammed, despite being a peak time train. This is what it looks like in coach C after leaving Stockport, and yes, I’m sitting in the luggage rack again! 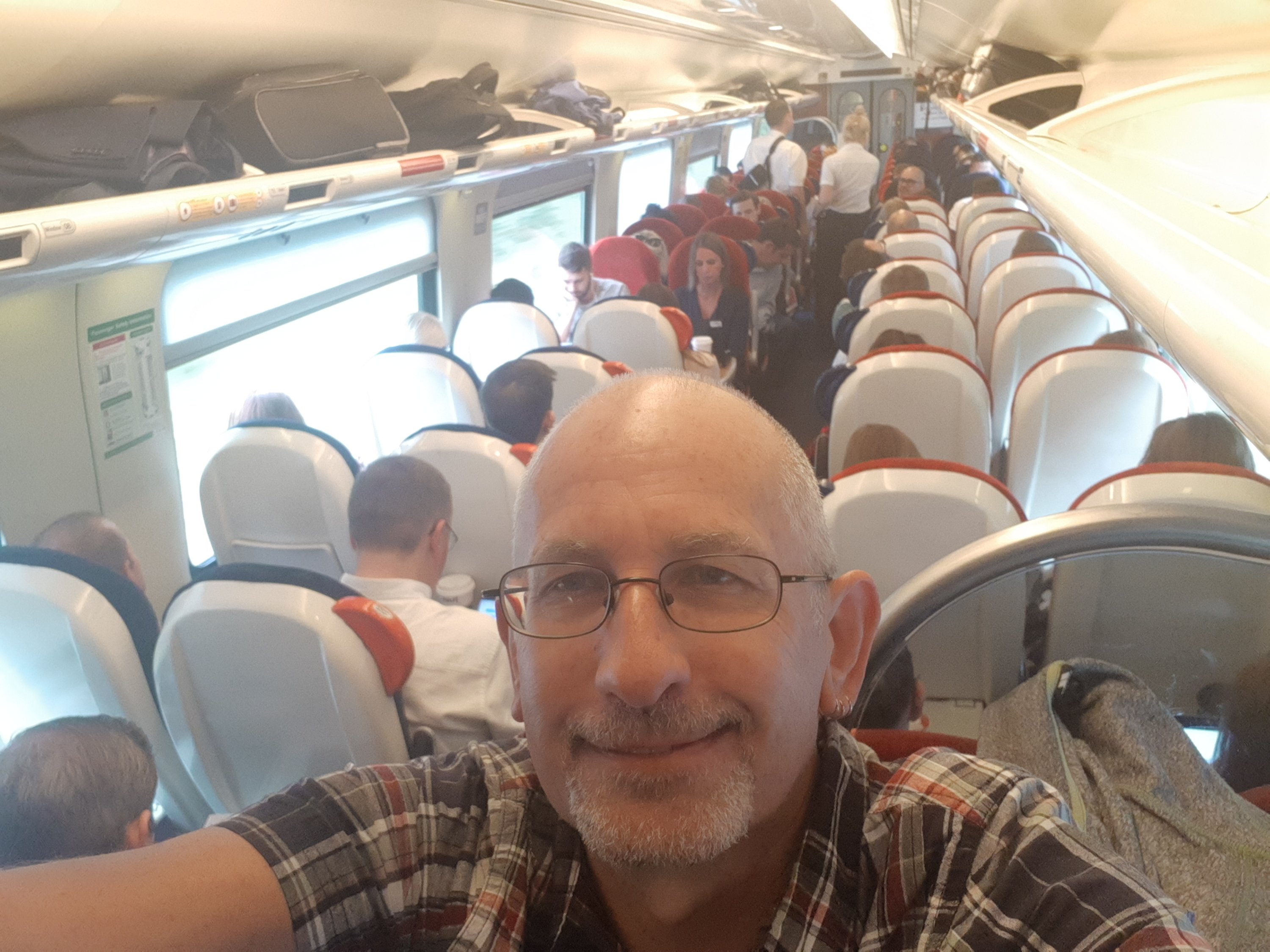 I’ve written many times before about how poor an offering this is when it’s the only intercity service between two of our biggest regional cities, Manchester and Birmingham. Roll on Hs2 when we’ll have decent sized trains on the route and times will be cut by 52%!11:48.We’ve now got two stations under our belts, having just left Belper. I won’t go into too much detail but we’re seeing some very different stations and groups.13:30.How’s this for a ‘bug hotel’? It’s on the 3rd station on our list… 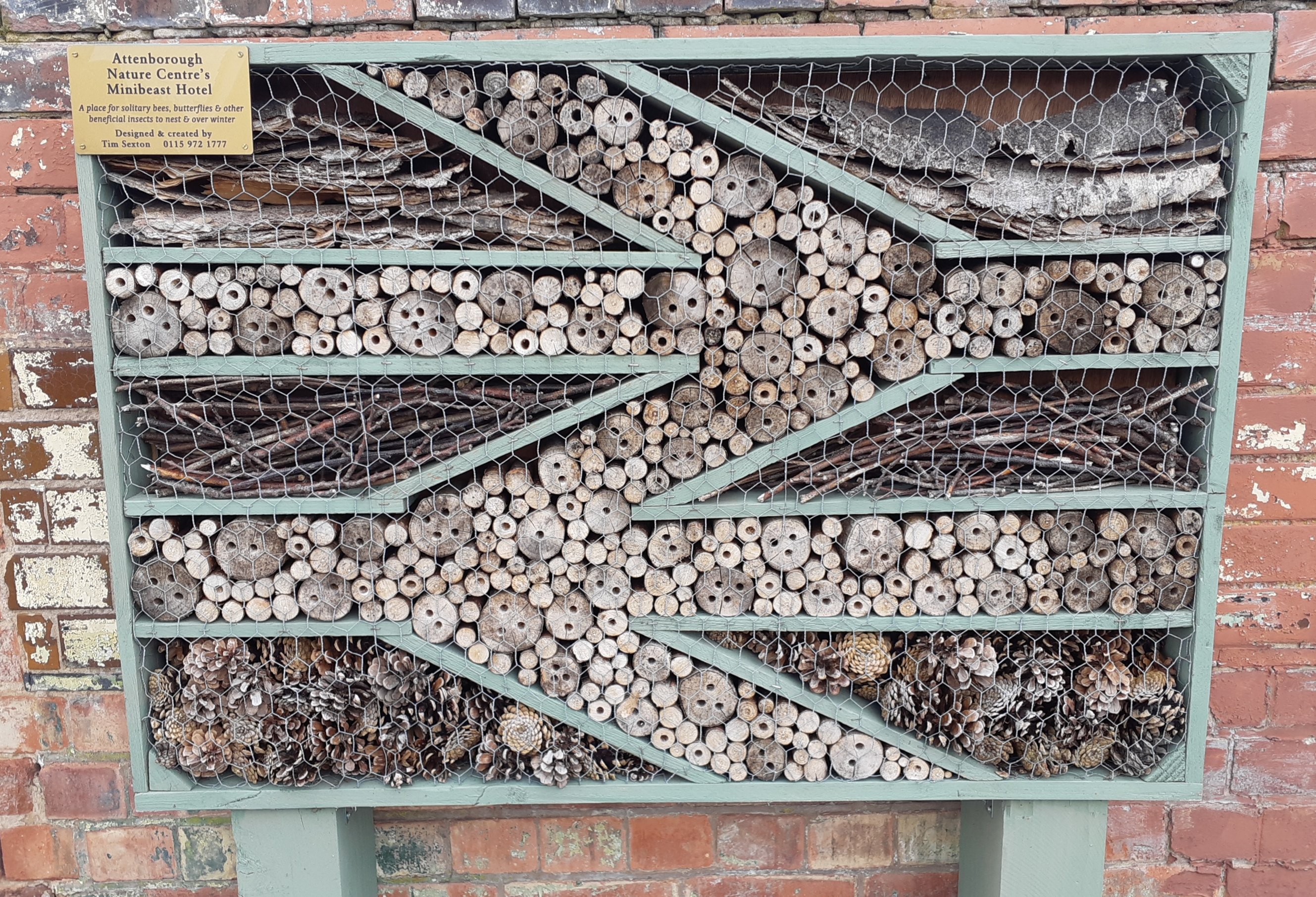 Station No 4’s been visited and we met Derek, a 93 yr old WW2 veteran who served in North Africa. Were now on the way from Syston to our last port of call for today. Spondon.