This weekend some papers were full of a speculative story that Hs2 is to be cancelled. Reports appeared in the Guardian, the Sun and the Express. The Sun’s story was a classic example of the disconnect between the journo writing the copy and the sub-editor writing the headline. Not only  wasn’t HS2 being cancelled, the PM, Teresa May wasn’t even in the loop and certainly didn’t offer any new opinions – far less actually confirm Hs2 was being cancelled. 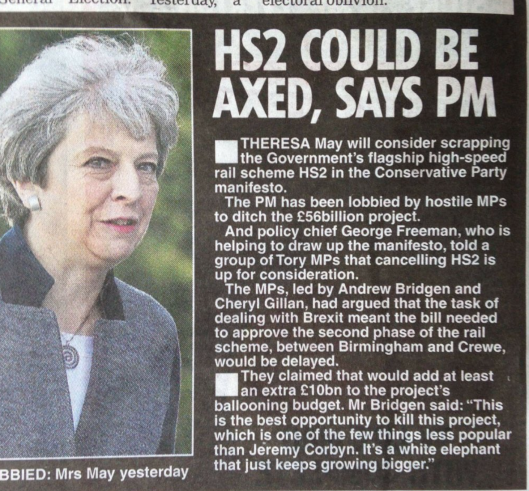 Only May never said any such thing. She’s not even quoted in the article. It’s another sub-editer ’embellishing’ a story (or lying, as it’s more accurately known).

This bit from the same story in the Express gives the game away.

Two MPs have asked that scrapping Hs2 is ‘considered’ and spun the story to the media that it IS being scrapped!

So, what do we really know from all this speculative froth? Only that it bares the fingerprints of two long-standing Tory opponents of Hs2 – MPs Andrew Bridgen and Cheryl Gillan, who’re almost certainly the people who’ve fed this stuff to the media to prop up their votes in the forthcoming general election. The massive irony is both MPs are claiming Hs2 should be cancelled to help pay for Brexit. The very same Brexit they both voted for! So much for the promised extra £350m a week for the NHS then!

Ignoring the froth, let’s remember a few things about the Governments stated position on Hs2. PM Teresa May has always been a supporter of Hs2 and voted to build it. Chancellor Philip Hammond has also been supportive. Both know that cancelling the project would destroy the Governments industrial strategy and stop tens of thousands of jobs being created as well as leave us reliant on a Victorian rail network that’s creaking at the seams. It would also leave our former EU friends (and soon to be competitors) with a massive PR coup when it comes to attracting businesses. May has previously stated her intention to put infrastructure investment at the heart of post-Brexit economic policy, so why change now? Let’s not forget that the UK ranks 24th in the world ranks of quality infrastructure (see link) and cancelling Hs2 would only make this worse. There’s nothing to be gained from cancelling Hs2 as the project isn’t a vote loser – as the 2010 and 2015 elections showed. Plus, the anti Hs2 campaign’s collapsed.

Few will remember the cartoon in a French newspaper when the Channel Tunnel opened. It showed French President Francois Mitterand arriving through the tunnel in a high-speed TGV train, whilst Margaret Thatcher met him in an old tram. It was an effective dig on the fact you’d speed through France and the tunnel on a high-speed train which would then crawl to London at 70mph on the normal UK railway as the Brits hadn’t built a high-speed line to match the French!

One can imagine EU nations saying to businessmen “why would you want to set up business in the UK, their infrastructure is crumbling and no match for what we’ve built across the EU – look they’ve even cancelled their last chance to drag their railways up to modern standards!”.

A cynic might ask why two Brexit supporting MPs have inadvertently admitted that – far from turning the UK into the land of milk and honey – Brexit is having serious financial consequences for the country (and don’t even mention that lie on the side of a bus). In Gillan’s case, it may well be because she’s backed the wrong horse. Her constituency is Chesham and Amersham. It voted to stay in the EU by 60% on a huge turn-out. It’s a wealthy area that stands to suffer considerably from Brexit as its residents find their city jobs moving abroad and their weekend trips to holiday homes in France & elsewhere curtailed by the exchange rate and need for visas. Gillan needs to try and prop up her vote as a Lib-Den resurgence & collapse of UKIP could well cause her problems, so keeping Hs2 antis on side is part of that. Planting media stories like this is part of a cynical re-election strategy, nothing more. Bridgen’s constituency voted leave, he doesn’t have the same worries, but keeping his Hs2 Nimbys sweet won’t do him any harm – especially as he’s fallen out with some over the £2m sale of his house to Hs2 Ltd!

I’m willing to predict that the last thing you’ll see in the Tories 2017 election manifesto is a commitment to cancel Hs2. Ignore the media froth, this is simply a couple of MPs trying to keep the idea out there to prop up their votes at home.