Calder Valley, Ride India, The 'Beast from the East', Travel

– just not quite the way I was hoping! The bad weather’s still causing havoc on road and rail. Yesterday Grand Central announced the first train they’d be running today would be the 10.34 from Halifax. I’d planned to catch it and Dawn had given me a lift to the station, but it was cancelled at the very last moment as we waited in the warmth of the car. I’d already thought of a plan B (just in case) so put ot into action. VTEC were running a sparse service from Leeds but Virgin West Coast were running every 20 mins from Manchester. I figured that – even if one or two were cancelled – the odds of success were still far better! So, that’s where i’m en-route to now.

Calder Valley services are running with a few cancellations and delays. I’m on the delayed 10:27 which left Halifax at 10:50. The irony of taking this route is that I’m following my cycle training course to Rochdale. I’m glad i’m in a warm DMU as it looks perishing outside!

I’ll update you on my progress from Manchester…

Whilst passing through Manchester Victoria I was rather taken aback to see an old friend from my days in London – 150129. 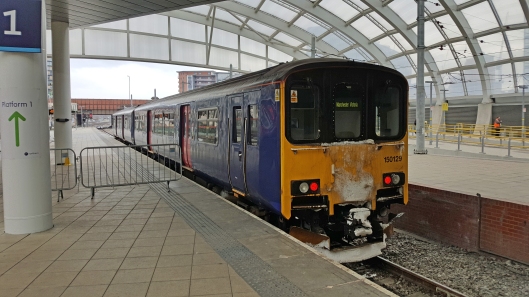 150129 has been about a bit. Centro to Silverlink to First Great Western to Northern…

This old BR built Class 150 was one of the local workhorses on the ‘Goblin’ (AKA the Gospel Oak – Barking line) in North London. I’ve travelled on it many times but never realised it was one of the units which has been transferred up North from GWR.

Taking my leave of Victoria I decided discretion was the better part of valour so instead of walking to Piccadilly as I normally do I caught a nice warm tram. I’m not exactly dressed for the freezing weather we’re experiencing and contracting hypothermia wouldn’t be a great start to this odyssey…

We’ve left Manchester 13 late, not because of the weather (although the set was late in from Euston) but because of human error. Our train Manager confessed she’d been waiting on the wrong platform due to a last minute set swap!

I’m currently between Stone and Norton Bridge in Staffordshire. We’ve been diverted this way rather than our normal route via Colwich due to the snow drifts. The fields are bare as all the white stuff’s blown off them onto the track! Hopefully, once we’re on the 4 track main line the situation will ease. The train’s packed as we’re carrying passengers who were on an earlier service that was cancelled before departure. Everyone seems stoic – people are just happy to be on the move. Mind you, the coach is warm as toast as the heating’s on full – so quite a few folk have drifted off to sleep!

For a change, the closer we get to London the worse the weather is getting. The skies darkened South of Rugby, then the snow arrived. We’ve just passed Wolverton and the snow’s blowing in at a rate of knots. I’ve had a call from a friend at Euston to tell me that it’s snowing in London.

The 'Beast from the East', Travel, Weather

Like many people, I took the mickey out of the ‘beast from the East’ as this weather front’s been called. It didn’t affect me travelling down to London yesterday and whilst it provided some spectacular clouds and snow showers, it didn’t really cause much disruption.

It’s had the last laugh.

When I was wandering through central London with a colleague after the Bradshaw address I went flying on an icy pavement. Apart from the loss of dignity it caused a minor sprain to my left wrist – just days before I start a 450km cycle ride around India.

This morning, when I threw back the curtains of my hotel I found Finsbury Park coated with a fresh dusting of snow. I wasn’t worried as the sky was a deep blue, so I took my time getting out and caught up with some work. What I hadn’t seen was the skies to the South…

It was only when I checked out that I saw the vast build-up of leaden clouds. Thinking “Oh well, this might be good for some snow shots” I headed over to some old photographic haunts on the East Coast Main Line and arrived at Alexandra Palace just in time for the blizzard! Now, I lived in London for 25 years and it’s not the first time I’ve taken snow scenes around there, but this was some of the fiercest weather I can remember. The wind was whipping the snow almost horizontally, so much so that I had to give up and retreat to Harringay station which is a little more sheltered. The Fast lines gave the game away, the line-speed is 90mph there, so the 4 foot was pretty clear of snow because it’s whipped away by fast moving trains. The snow was so heavy that they filled up again within minutes. Admittedly, It made for some good shots but it also made me start wondering if I might have problems getting home…

A Siemens Class 700 powers through the snow as it passes Harringay station, heading for Peterborough.

After the snow came the sun. Here’s 365503 arriving at Kings Cross.

What reassured me was the sight of Grand Central’s 1148 Kings Cross – Bradford flashing past me on its way North. It was a false sense of security. When I got back to Kings Cross after doing some cycle kit shopping I found that both following services (the 14.48 and the 16.03) were cancelled, leaving me with the option of hoping the last one at 19.52 was running, or coming up with plan B.

The idea is to bail out at York and catch the 19.18 Northern service to Halifax, which is the last through train of the day. After that I have to change at Leeds. If I do get back to Halifax at 20.38 as planned there’s a couple more obstacles.

I’ve a mile and a half to walk home.

The last part of the walk home is either down a steep cobbled hill (suicide), or an almost as steep tarmac road.

This is going to be fun…

The icing on the cake is that I’m in a rush to be back as Dawn and I have made new wills and we’ve got an early morning appointment to sign them tomorrow as I’m off to India on Friday.

I can hear the ‘Beast from the East’ laughing now!

As with most plans, it never survived first contact. We were signal checked for several minutes outside York, which meant that we passed my connection on the way. Tbe good news is Trans-Pennine Express were running a 19:40 to Liverpool, which I caught (mid blizzard) instead.

The railhead conditions weren’t great and the unit struggled, but it got me Leexs in time to catch Northern’s 20:19 to Brighouse via Halifax. I needn’t have rushed. It was 10 late leaving due to the driver being delayed on their way in on another service. There’s a lot of snow on the ground here and more’s falling, so it’s going to be interesting to see what happens when I get to Halifax…

Well, I finally made it home!

The snow persisted all the way which actually worked in my favour as it’s a damned sight easier to walk across fresh snow than the icy, compacted stuff. I even made it down the infamous hill without going arse over tit.