It could be that I’m getting older and these things become more frequent as you do, or it could just be a spate of bad luck, or divine intervention or – well, just about anything really, depending on your beliefs. But there’s been a run of people whom I know dying recently. I received news of two yesterday. Both were sad for different reasons, but one was completely out of left-field.

Gwilym Jones was a train driver. An ex-West coast man he’d moved to be a depot driver at Wimbledon Park in London, which is where I first met him. A fellow Merseysider (although I used to rib him about the fact he wasn’t a proper Scouser as he was actually from across the water in Birkenhead!) we shared the same sense of humour and love of the railways. Oh, and beer – and stories. Gwyll had a treasure-trove of stories from his days as a train driver.

We’d usually meet in the company of his colleagues Steve Upton (who introduced us to each other) and Chris Buckland, amongst others. One memorable year (2007) our little group were down at the Swanage railway gala with the 4-VEP which was being used in passenger service. For those who wonder what I’m talking about, a 4-VEP is an old electric train of 4 coaches built in the 1960s. In the evenings we’d bed down in several of the 1st Class compartments. This produced some memorable moments and the jokes about flatulence and bars of soap which are still told today!

When I moved from London to Yorkshire we didn’t see as much of each other but our friendship was maintained through Facebook. The old humour and interests were still there of course, as was the banter, we just shared it in a different way. Gwll never mentioned his illness on Facebook, or to many people, but he’d developed Hodgkin lymphoma last year.

Yesterday, Steve Upton broke the news that Gwll had died on Monday, aged just 53, so this is my little tribute to him. RIP mate, safe journey. 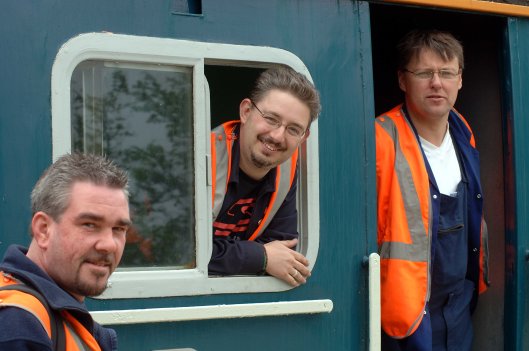 From L-R. Gwyll, Steve and Buckie with the VEP at Swanage in May 2007. Fond memories.