I’m back in London today for a book launch and heading down early to do a few other things beforehand. Unfortunately, it’s not a vintage day on the rails. Dawn had a phone-call from a colleague, telling her that they’d be working from home today as a person had been hit by a train at Brighouse, causing many cancellations and uncertainty. This made me change my plans too so I hitched a lift with Dawn into Huddersfield and eschewed the idea of heading down the East Coast by heading for Manchester instead. As usual Trans-Pennine Express services are running late by around 15 mins. The situation doesn’t imorove when the Manchester Piccadilly service I was catching was terminated short at Stalybridge in order to work a service back to Hull. Needless to say, the one following behind it is late too, leaving a lot of disconsolate passengers hiding in the waiting room from the cold weather. The sunshine we had in Yorkshire’s refused to travel this side of the Pennines!

Northern Rail always cop the flak for delays but in my experience TPE are just as bad – yet they seem to escape the same levels of criticism, which has always puzzled me.

The 10:53 has been further delayed until 11:12. To add insult to injury, several TPE’s have passed through on their way to Piccadilly non-stop.

I’m finally on my way to London after taking a slight detour when I got to Manchester. In the adjacent platform was a pair of the old BR ‘Pacer’ trains in original condition with the bus-type seats. As they’ve little time left I took a spin on them out to Guide Bridge in order to get a few pictures.

Now I’m on very different traction, one of Virgin Trains 11-car Pendolino’s which could be my final trip with the company as their franchises ends on Sunday after 22 years. Personally, I’ll be sad to see them go but I’m looking forward to seeing what the new ‘Avanti’ franchise will bring to the network.

We’ve just sped through Nuneaton on our way South and the weather’s picked up again to leave us with a sunny but cold day. My train’s only about 45% full, so I’m sharing a table bay of four with another chap who’s busy bashing away on the keys on his laptop in a similar fashion to me. Most folk in this car seem to be travelling for business, so it’s a very quiet coach. The only noise to be heard is the gentle thrum of the air conditioning as it fights against the exterior temperature to keep the coach warm.

Since arriving in London I’ve been busy taking pictures around Euston station and the nearby streets, documenting the changes that High Speed 2 (HS2) is bringing. That said, the station itself feels very different now it’s full of de-branded Pendolinos and Voyagers. I’ve been taking pictures here since the 1980s and seen several changes over the years, but the scope of HS2 is on an entirely different scale! I’ll add links to all the pictures when I have time, but here’s a couple for now.

Phew! After a busy few hours I’m heading back to Yorkshire with my Grand Central train just pulling into Doncaster. The book launch went really well and was attended my many senior people from across the industry as well as many journalists and safety experts. Here’s a couple of shots from the event.

The fun’s not over yet. It seems the fun and games at Brighouse this morning were actually caused by an engineers train splitting the points at Greetland Jn, leaving the direct route to Halifax unusable. To get around the orobkem my Geand Central service is running to Hebden Bridge, where it’ll reverse and head back to Halifax via Milner Royd Jn.

I’ve been at work since 07:30 this morning, busy editing the mountain of pictures from yesterday, sorting out paperwork and job enquiries and all the other stuff that comes with being a freelance photographer, writer and ACoRP judge. Sometimes I feel like I could do to clone myself as there’s just not enough hours in the day to get through everything. On the bright side, my commute from bedroom to office takes about a minute – or possibly 10 if I go downstairs and make coffee first!

Editing the pictures I took yesterday made me realise just how much the railways in the North are changing. The location I picked in Central Manchester is one I’ve not used for a few years. Since then, several of the franchises passing through (EMT, Northern and Transport for Wales) have or are changing hands, whilst a number of new services are using it due to the extension of electrification and the opening of the Ordsall Chord. Here’s a couple of pictures I didn’t add to yesterday’s blog that illustrate what I mean. 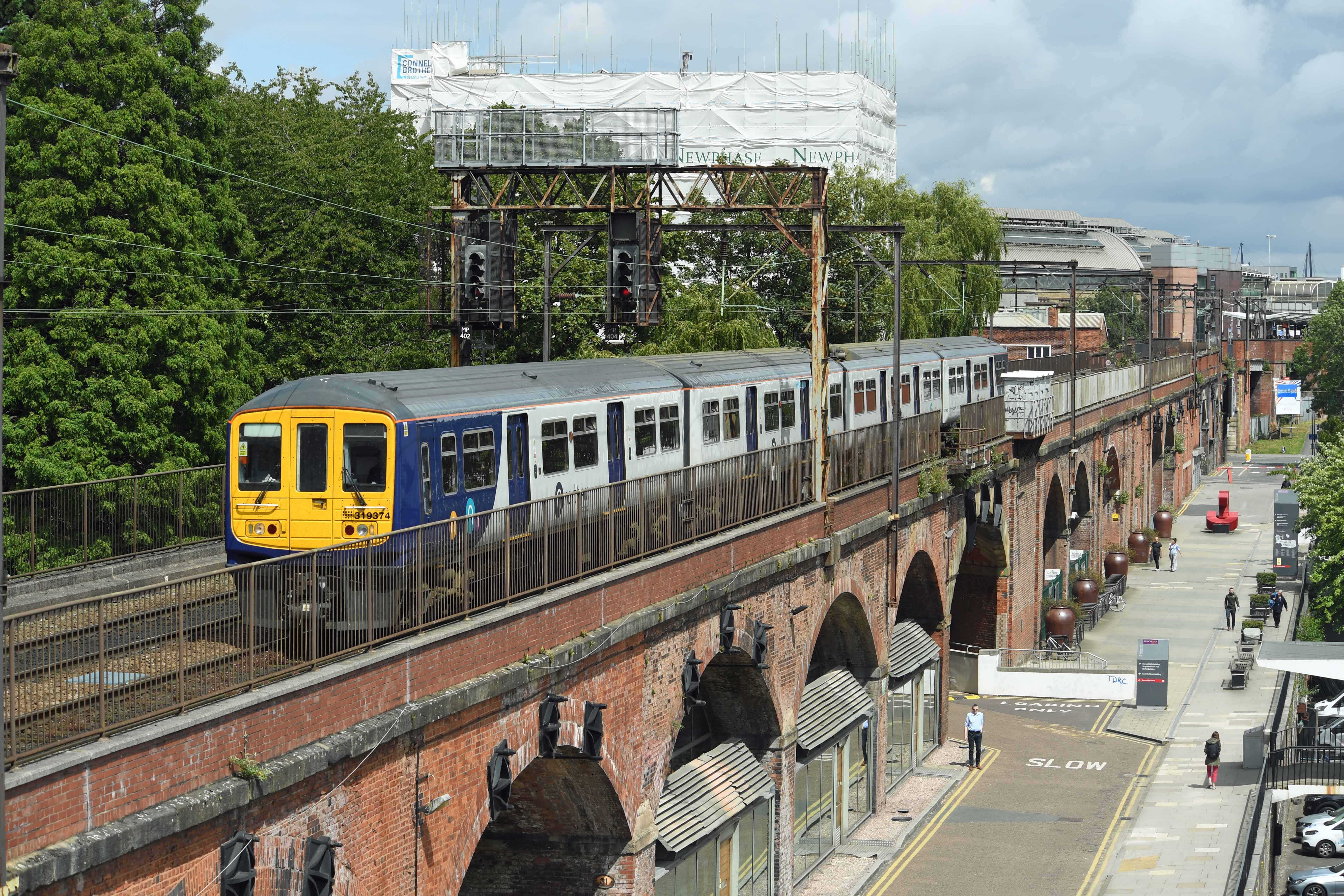 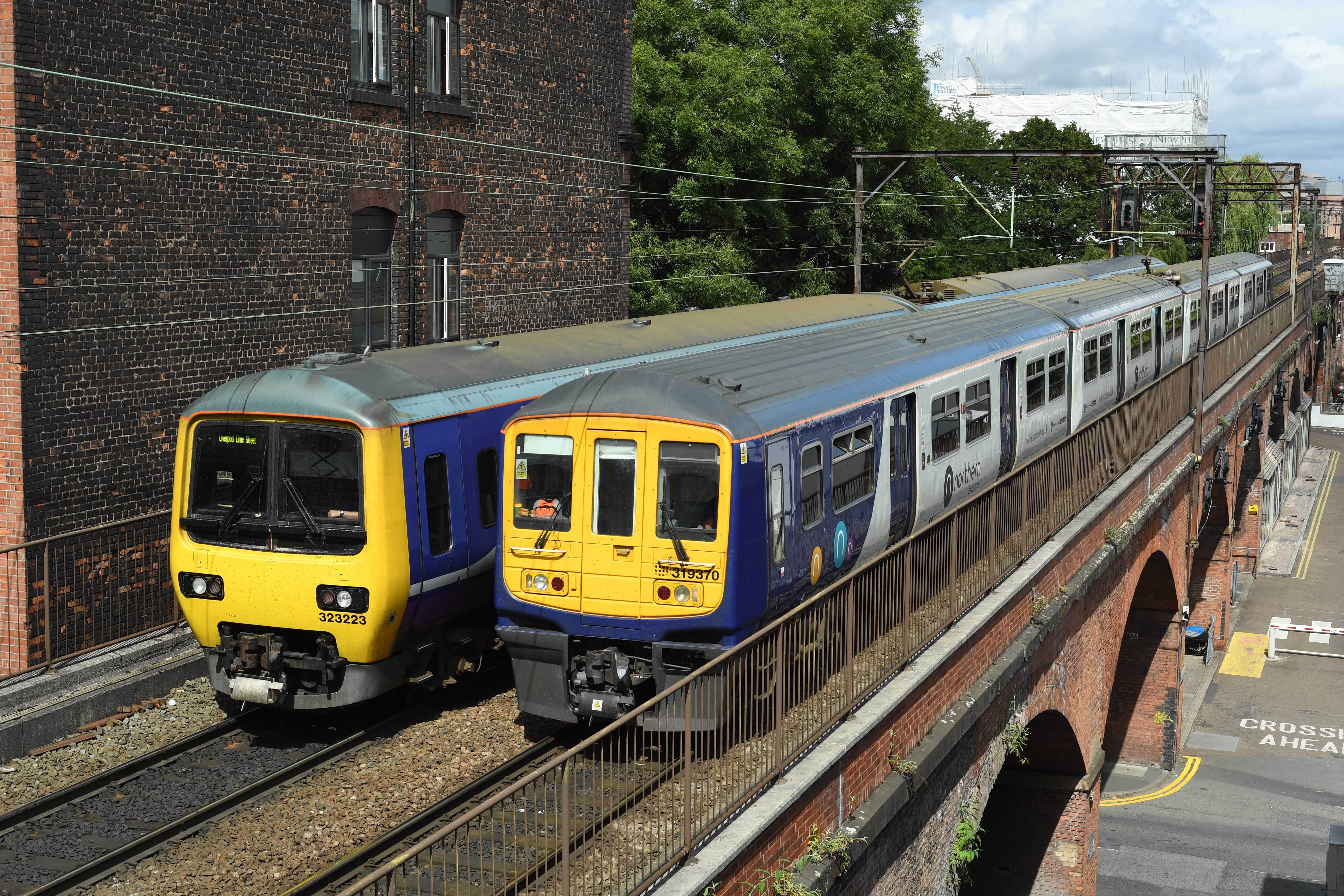 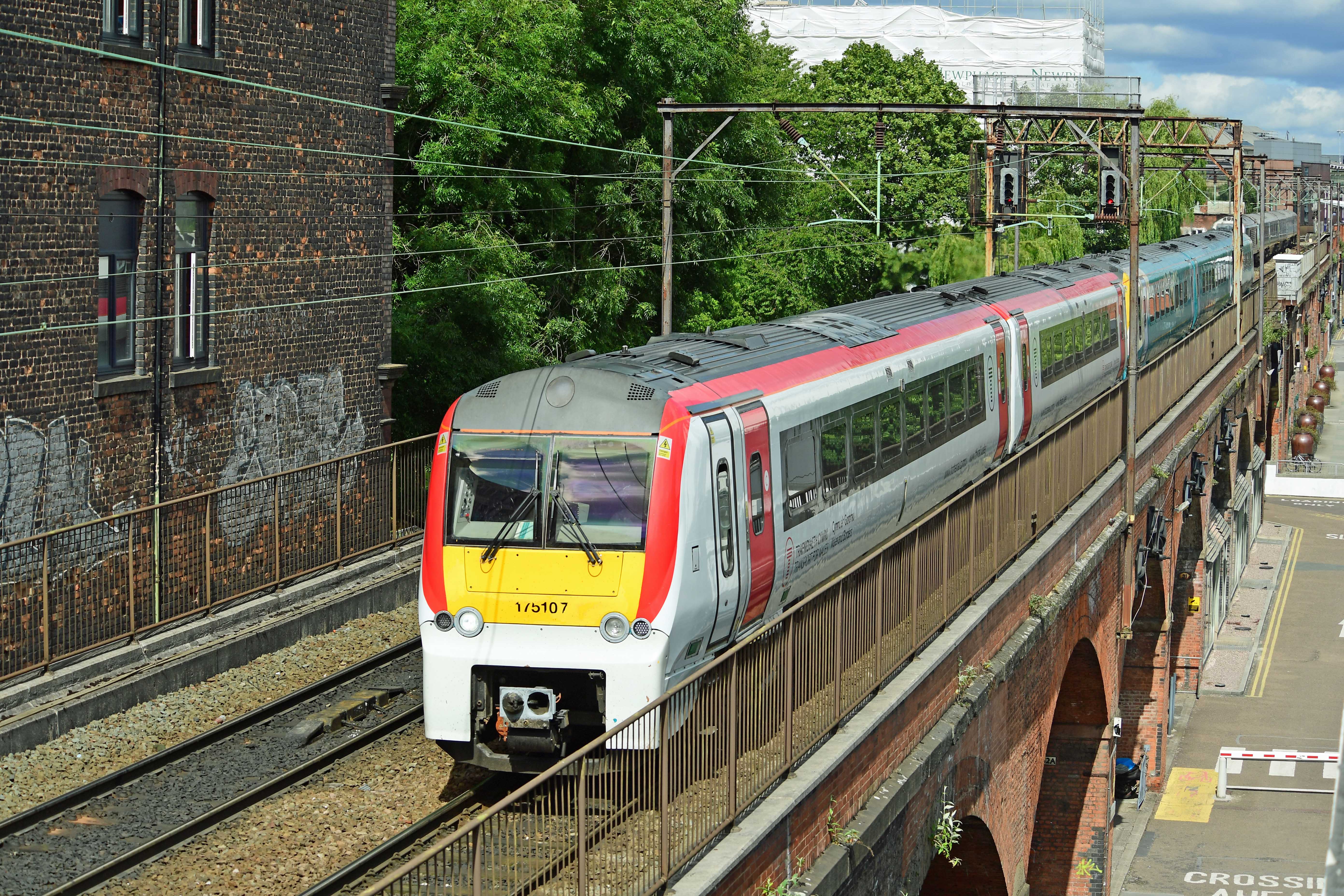 I’d never seen a five-car on this train before. Here’s 175107 in the new Transport for Wales livery and 175109 in the old ATW livery working 1D30, the 1536 Manchester Airport to Llandudno. These units will be replaced by brand new stock in the next few years. 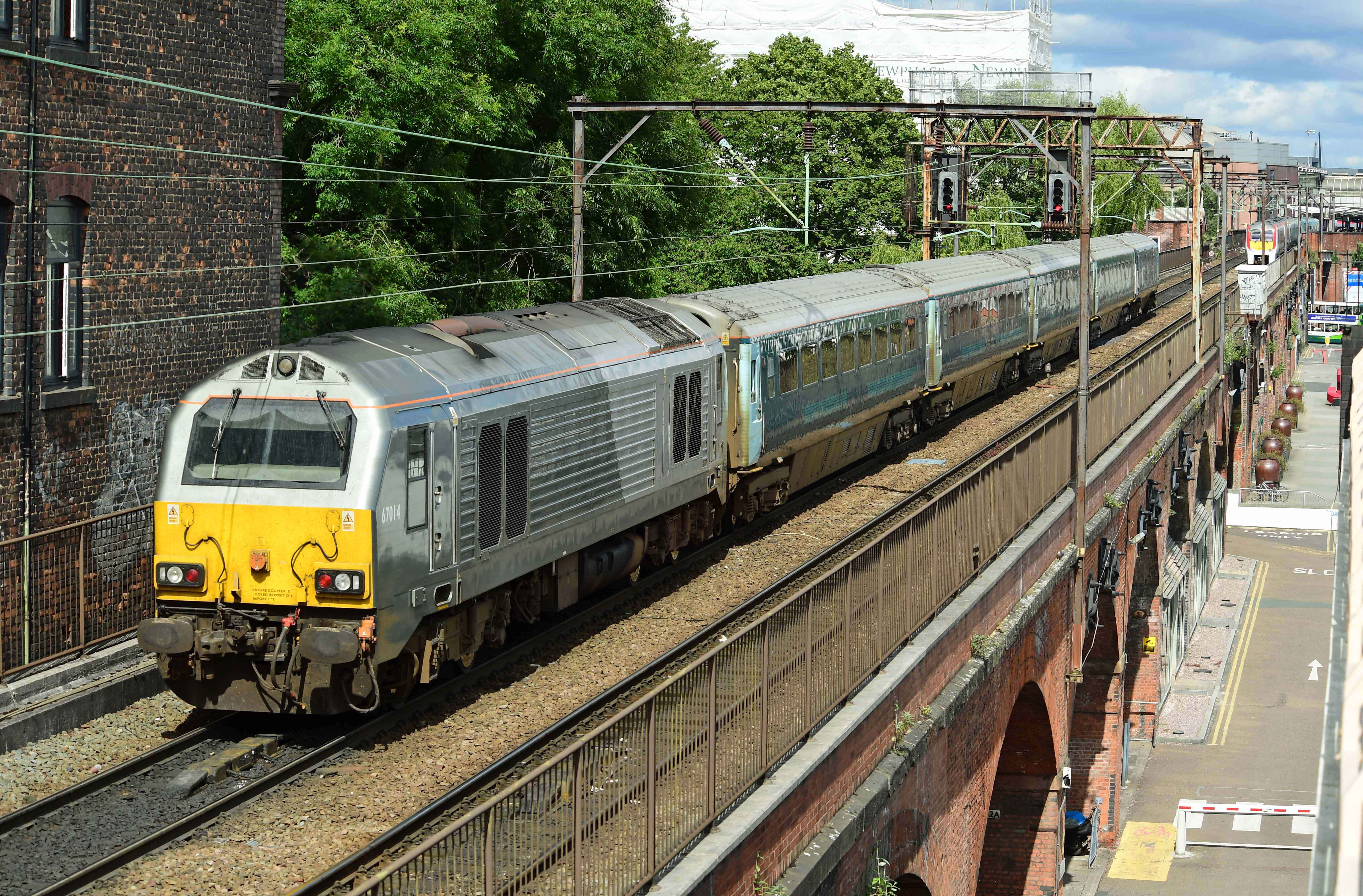 Another train that’s due to be replaced by new stock is this, TfW’s 1H89, the 1307 Holyhead to Manchester Piccadilly which still uses ex-Virgin Trains Mk3 coaches and a DVT. The DB Class 37 still sports the old Wrexham and Shropshire livery, despite that company ceasing operation in January 2011. 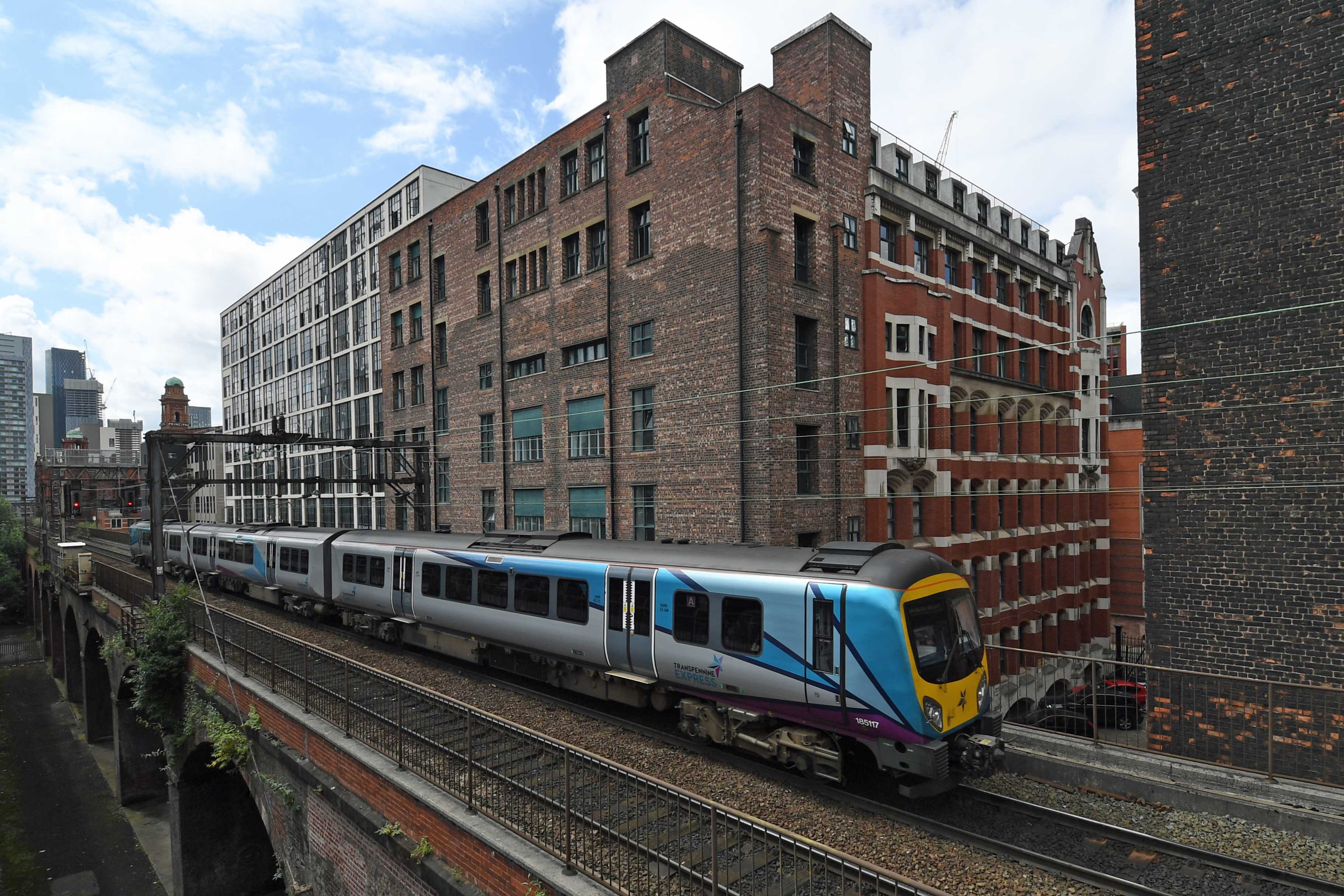 185117 just after leaving Oxford Rd whilst working 1P76, the 1255 Middlesbrough to Manchester Airport which has passed through Manchester Victoria and traversed the Ordsall chord.

As you can see, it’s a changed network and it will change even more over the next few years as the CAF built Class 195s enter service en-masse and if the West Midlands Class 323s are cascaded to Northern to replace the 319s in order to allow 6-car trains to run. Then there’s the new TPE stock which will (hopefully) begin to enter service later this year. The North’s railways are going through some exciting and positive times, not that you’d know that from listening to the Mayor of Manchester, Andy Burnham, who only mentions the railways when it’s an excuse to stick the boot into the Northern Rail franchise. Despite an invitation to attend the launch of Northern’s new trains, he was conspicuous by his absence.

The rest of this evening’s been taken up with planning the logistics of the next couple of days work for a client. Thursday – Friday will see me in London and Manchester and I’ll be travelling down to London later tomorrow. It will involve another early morning commute to the office as I’ve plenty to do before I head South. So, it’s goodnight from me! Watch out for a rolling blog tomorrow…