On June 20th a new House of Commons research paper was released, written by one Andrew Haylen. HoC research papers are normally well-balanced and unbiased, but this one seems anything but. It places a lot of weight on newspaper reports and uncritically swallows the House of Lords Economic Affairs Ctte report which criticises HS2

Haylen’s report claims that “there are alternatives (to HS2) available that could deal with the capacity constraints on the West Coast Main Line at a lower cost.”

Really? We’ll look at that in more detail in a minute. The report also claimed that the  estimates for the cost of HS2 were actually £65bn, way over the budget envelope of £55.7bn.

Needless to say, this paper was leapt on by opponents of HS2, who made all sorts of daft claims.

Then mysteriously, the report vanished only to re-appear on the 27th June with a new co-author, one Oliver Bennett. One of the changes that was made to the report was the idea that HS2 was going to cost £65bn, the forward to the report now says this;

“It seems the estimated costs for the full Y-network of HS2 had risen and have been estimated in this paper to be around £65 billion at the time of the 2015 Spending Review. This estimate is derived using figures published by the National Audit Office (NAO) and the Department for Transport (DfT) in 2016 and 2017 about the estimated scale of efficiency savings that would be required to keep the project within the funding envelope.

Since then, HS2 Ltd and the DfT have sought to reduce the costs of the infrastructure for Phase 2b by around 40% from the 2015 Spending Review estimate, with the total savings ambition for Phase 2 of the scheme at around £12.8 billion (in 2015 prices). As at November 2016, £7.14 billion of these savings had been embedded in the Phase 2b cost estimate. The revised cost estimate for the full Y-network, based on efficiency targets set out in the July 2017 financial case, is therefore £52.6 billion”.

Clearly, someone, somewhere ‘had words’ and pointed out the financial errors in the report! You can find the revised report here.

But there’s not just financial holes in the report. Bizarrely, there’s not a single mention of freight! How on earth Haylen can claim that the strategic alternatives to Hs2 can supply sufficient capacity when he’s only looking at WCML passenger services? He clearly has no idea that the Existing West Coast Main Line is the busiest mixed traffic railway in Europe. Freight could be a big beneficiary of the capacity HS2 releases on the WCML, that not only encourages modal shift off our congested roads, it also has an impact on meeting our carbon cutting targets. Is any of this considered? No.

Nor does Haylen seem aware of the fact that HS2 doesn’t just release capacity on the WCML! HS2 also removes long-distance non-stop services (such as Kings Cross-York and beyond) from the East Coast Main Line (ECML) and also releases capacity on the Midland Main Line too! I can only question just how much research Haylen has actually done into the strategic case for HS2 if he’s managed to miss these important details out. Or is it that they’re too inconvenient as they’d destroy his claim about the supposed ‘strategic alternatives’? 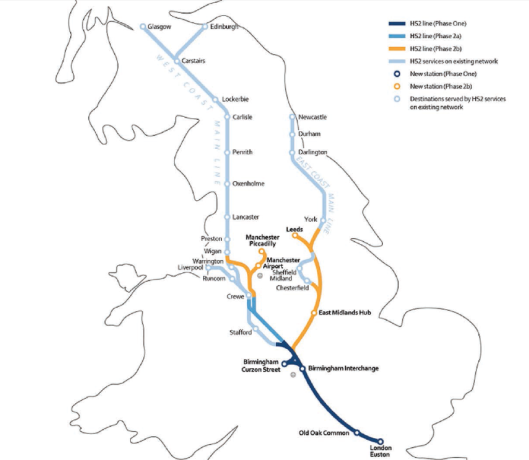 Haylen seems blissfully unaware of the existence of the Eastern arm of Phase 2b – the one that goes to East Midlands Hub, Chesterfield and Sheffield (thus relieving the Southern end of the MML) and onwards to Leeds and York (thus relieving the ECML).

How will his belief that tinkering with capacity upgrades to the WCML is sufficient help them? Simple. It won’t. Not one bit. His conclusions, (and his briefing paper) are so badly flawed they’re worthless. Not only that, they’re actually misleading. This is not the standard we should expect from the House of Commons library.

Even Haylen’s claims about the WCML passenger services don’t stand up to scrutiny. Let’s look at the issues in detail and the scheme known as “P1” from a 2013 report on HS2 strategic alternatives Haylen champions. Here’s the summary from the report. 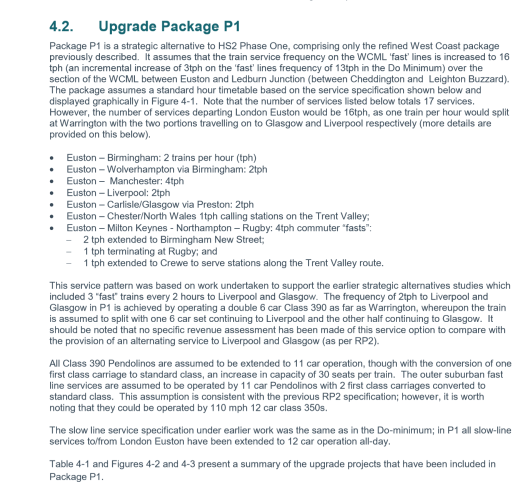 P1 is is a package of works costed at around £2.5 billion, that is said to increase capacity on the WCML to an extent that makes HS2 unnecessary. That report dates from 2013, so clearly whatever argument was made for P1 was not accepted as HS2 was chosen instead. What’s changed?

First, what is “P1”? Essentially, it’s everything that was rejected as part of the last WCML upgrade – grade-separation at Ledburn and Colwich, and 4-tracking just North of Nuneaton and on a short section of the Birmingham line. No work is said to be necessary at Euston, on the basis that turnrounds can be shortened.

And for that we get – what? One extra train per hour net out of Euston, making 16 instead of the present 15 on the Fast lines. The Birmingham and Manchester routes both go from 3 tph to 4 tph, but the present 2 tph in peak hours to Runcorn and Liverpool reduces to one, compensated for by detaching a portion off a Glasgow train at Warrington (something than in itself demands a stretch of quadrupling of the Chat Moss line).

But why? Seats on long-distance trains are not the pressing problem. The problems on the WCML out of Euston are capacity for commuters, and interurban connectivity. All four fast line commuter services from Euston in the evening peak hour are “double red” for crowding; two of the four are 12 cars already. And through minimising journey times, connectivity is poor – Watford and Milton Keynes each have only an hourly fast train to the West Midlands, not much good for commuting and no good for accessing an airport. There is no direct service in peak hours between the employment and residential centres of Watford and Rugby.

So how does P1 do in these terms? In terms of connectivity, it’s a disaster. For instance:

• Watford doesn’t even feature on the service diagram, so its link to the West Midlands, poor today, is presumably beneath notice;

• Milton Keynes is there, but what is shown is no direct service to the West Midlands, just two through trains running via Northampton and making local calls on the way, extending journey times;

• Presumably to minimise journey times, Coventry and Birmingham international are each served by alternate Euston – Birmingham fast trains, in place of all three today;

• Trent Valley stations are served by putting their stops into the Chester service, slowing that probably by about 15 minutes. And as it doesn’t now call at Milton Keynes, presumably in mitigation of the extended journey time, they have no link to that employment centre other than an hourly slow service via Northampton;

• And what happens to the Trent Valley stations peak services, formed by through trains dropping in, up in the morning and down in the evening? P1 is presented as a peak service, and there they aren’t;

• Rugby has no fast trains to London at all.

As for capacity, the real benefit seems to be just the chance to put one more 4-car unit on two outer suburban trains in each peak hour. This is an indirect effect of the grade-separation at Ledburn, allowing trains to be presented to Northampton at reasonable intervals instead of in pairs, increasing the chance of being able to reduce trains to 8 cars for the sake of platforms on the Birmingham line, or simply to save unit-mileage and fleet by not losing a 4-car unit to Birmingham or Crewe unnecessarily. But this is a pretty small return, especially as these trains are now the only service for commuters to Rugby, who currently have a number of stops on InterCity services. And whilst stating an assumption that all slow line services will be 12-car, no mention is made of the fact that, short of major work at Euston, platform 10 at Euston remains unable to take 12 car trains, so they can’t all be 12-car.

And if we take the service diagram at face value, there must be doubts about practicability of what it shows. Can New St and Piccadilly accept four Intercity trains per hour in place of the current three? Probably not. Can two trains per hour be timed to make the slow crossing move to the Manchester line at Crewe in the face of everything from Up North? “Not proven”.

Then, how valid is the underlying assumption that Euston can handle another peak hour train without enhancement? Ironically, it probably is valid for the peak hour itself, as things can only be efficient in the peak, or else they don’t work at all, although a platforming pattern that is efficient at Euston may deliver trains to the rest of the railway at times that don’t suit constraints elsewhere. The difficulty is the transition to the off-peak service. We are given no clue as to what the off-peak service is, but if a 15- or 30-minute peak cycle has to be adjusted to something like the present 20-minute cycle, the platforming pattern at the transition becomes irregular, leading to either excessive use of platforms or weird gaps in the service. Alternatively, you might create the off-peak service by dropping from 4 tph to 2 tph on the Manchester and Birmingham lines, but that is less frequent than now, which can only deter optional travellers.

So P1 is not a shovel-ready alternative to HS2. The useful capacity it adds is minimal, and the journey time savings it presents are achieved at the expense of connectivity. Maybe it can be improved – probably some calls could be reinstated given careful flighting of trains, but what makes a “timetable solution” at one place almost inevitably creates a timetable problem at another. Meanwhile P1 costs about as much per extra path as HS2 Phase 1, but without the journey time savings or potential for 400 metre trains, or availability of paths to relieve the MML and ECML, so the chances of a positive business case are pretty low.

Which is where HS2 comes in. As well as simply creating another pair of tracks’ worth of trains, in effect it relieves the WCML of one of the competing pressures, namely journey time for the end to end travellers. Once able to focus on capacity and connectivity, the railway we already have can do what it is good at – serve commuters, local and interurban passengers, and freight. P1 is just a diversion from this objective; it’s a clever attempt to show what we might have to do in the absence of HS2, but it didn’t work in 2013 and it doesn’t work now.

There’s really only one place to file this research paper, and that’s the bin.