UPDATE, Aug 2019. I’ve added new details where the position (and future) of some fleets has changed since this was originally written.

The old expression ‘feast or famine’ springs to mind when I look at the situation our railways are currently facing with the amount of new trains on order and old ones coming off-lease.

I remember when the railways were first being privatised. The uncertainty around what was happening led to a 1,064 day hiatus when no new trains were ordered. This led to the closure of the ABB works (formerly BREL) at York, where the majority of the BR built trains that still run in service were constructed.

How things have moved on from those days! Now we have a massive amount of new trains coming into service or on order. Also, a mix of old and new train builders are either planning (or building) new assembly plants in the UK. TALGO have plumped for Scotland whilst CAF have picked Llanwern in S Wales and begun construction. Alstom have a site in Widnes whilst Siemens have announced a site in Goole.

This month the Rail Delivery Group published the 6th edition of its Long Term Passenger Rolling Stock Strategy. It makes for interesting reading. It points out that

Those 7,187 vehicles will see a step-change in our existing fleet and the near elimination of loco-hauled, main line services and displacement of many of the old BR built fleets. As the document highlights,

“Major orders for new build vehicles coupled with the reduced electrification programme has so far resulted in over 4,000 vehicles being displaced from service in the next 3 years. Many of these vehicles are near the end of their life, but 150 are brand new. As at March 2018, there are over 1,500 vehicles less than 30 years old that do not currently have a future lessee, so while over 7,000 vehicles will be built, the net impact on the national fleet total will be less than this number. Displaced, serviceable vehicles bring challenges to the supply chain, notably for owners who may have idle assets, but also for overhaulers who would historically have refurbished mid-life vehicles for their next role.”

That’s a hell of a lot of displaced trains with nowhere to go. OK, many will be on a one-way trip to the scrapyard (who would want to lease Pacers or Class 313s and 315s?) but there’s a significant number of trains with life left in them yet. Firstly, here’s a list of what’s coming into service now or in the next few years.

Now here’s a list of what’s coming off-lease and when.

As the list shows, 2019 is going to bring big changes. Class 90s on Anglia and 91s on the East coast will disappear, even some modern DMUs like the 170s and 185s will be surplus (although I’m sure they’ll find homes somewhere). It’s clear that the old Pacers will be going for scrap, although some will be preserved. I do wonder about the future of the single-car 153s. Could they be added to Northern’s 155 fleet to make permanent 3 cars in the way GWRs 158/9s have been? Due to modern engine emissions standards and the fact they have ‘grandfather rights’ I can’t see the 150s and 156s remaining homeless for long either. Curiously, whilst the list mentions the 313 & 315 fleet, it neglects to mention their Merseyside cousins, the 507/508 fleet. From 2019 they’ll be replaced by new trains from Stadler of Switzerland.

The idea that some trains could be converted for freight use has been mooted. HSTs are one example, and there are suggestions that Pacers *could* be (however unlikely). Here’s a couple of examples of when this happened in BR days.

Other fleets which are unlikely to find new homes are the old BR 3rd rail stock such as the SWR 455s – despite them having been re-tractioned recently (link). They date from the early 1980s, so they’re 35 years old, and I can’t realistically see them being converted to bi-mode or 25kv overhead – especially as more modern fleets will also be off-lease. Another fleet with an uncertain future (despite having been expensively rebuilt between 2013-16) is the Class 458/5s.

In 2020, just 2 years after entering service, the Siemens Desiro Class 707s will be homeless – although again, I can’t see them remaining so for long. The same with the Anglia Class 379s and I would think the Class 360s and former LM 350/2s. The Class 323 fleet’s an interesting one. Split between Northern and the former London Midland franchise, both will be surplus from 2019-20. They’re a popular train with both passengers and crew – and pretty nippy, but will their age (they were built in 1992-3) and fact they’re a small non-standard fleet of 43 units count against them? Some of the 319s on the list may have a future as more bi-mode conversions but, for me, the big question mark is over the surplus BR built class 317s and 321/322s. I’m not a fan of any of them, the passenger environment’s not as good as the later Class 365s (also surplus, but I hope they do find a home) plus, what’s the need for 100s of 4 -car EMU’s now that electrification’s being scaled back? I suspect a few ROSCO staff will be asking the same question…

Of course, this glut of surplus trains may yet grow depending what happens when the next SET franchise is let. Will we see the Class 465’s and 466s being added to the list?

An interesting fact is that the Railway Magazine calculated we’d need 52 miles of sidings to store the vehicles that are coming off-lease. 52 miles! That’s a hell of a logistical and economic challenge for the ROSCOs. As the old Chinese curse says ‘may you live in interesting times’ – and for the ROSCOs and train maintainers, they certainly are…

To round up, here’s a few examples of the fleets which are coming off lease.

Just to show how quickly things change, whilst I was writing this came the announcement that Heathrow Express services will continue to operate until at least 2028 under a management contract between Heathrow Airport and FirstGroup subsidiary Great Western Railway. This means HEx will bid goodbyes to their 14 strong fleet of Class 332s as GWR will be using 12 specially modified Class 387s to run the service. That add another 61 100mph vehicles only 20-21 years old looking for a home….

Yesterday the rail press and other interested parties gathered at the RVEL engineering works in Derby to see Porterbrook leasing unveil their prototype refurbished Pacer, the 144e. The timing couldn’t have been better as the previous day the Transport Minister had been forced to announce delays to some important rail electrification schemes.

Over the next weeks you’ll be able to read in-depth articles on the vehicles so I’m only going to give you a few basics here. First, I want to stress that this is a prototype. It’s showcasing what could be done to a Pacer (or any 150xxx series DMU), not necessarily what will be done. It’s a menu of options, which includes new seats, internal trim and a toilet module that makes the vehicle PRM-TSI compliant. Porterbrook have gone further and fitted 144012 with wifi, a vastly improved Passenger Information System (PIS) and a TV screen that shows either adverts of passenger information. They’ve also fitted a rather clever inbuilt ramp to assist with wheelchair access. The vehicles centre of gravity has been lowered by the removal of a large water tank (the new toilet requires far less water) and the luggage racks, so you should expect a better ride.

When you have a look at the pictures you’ll see it’s unrecognisable as a pacer. My RAIL colleague Richard Clinnick described at as looking like an Electrostar on the inside.

There’s one other important thing about the 144e – it would cost around a third of the price of a new DMU (& even less if you took some of the frills out). 144012 will enter service with Northern within the next month or so. When it does, why not check it out for yourself? 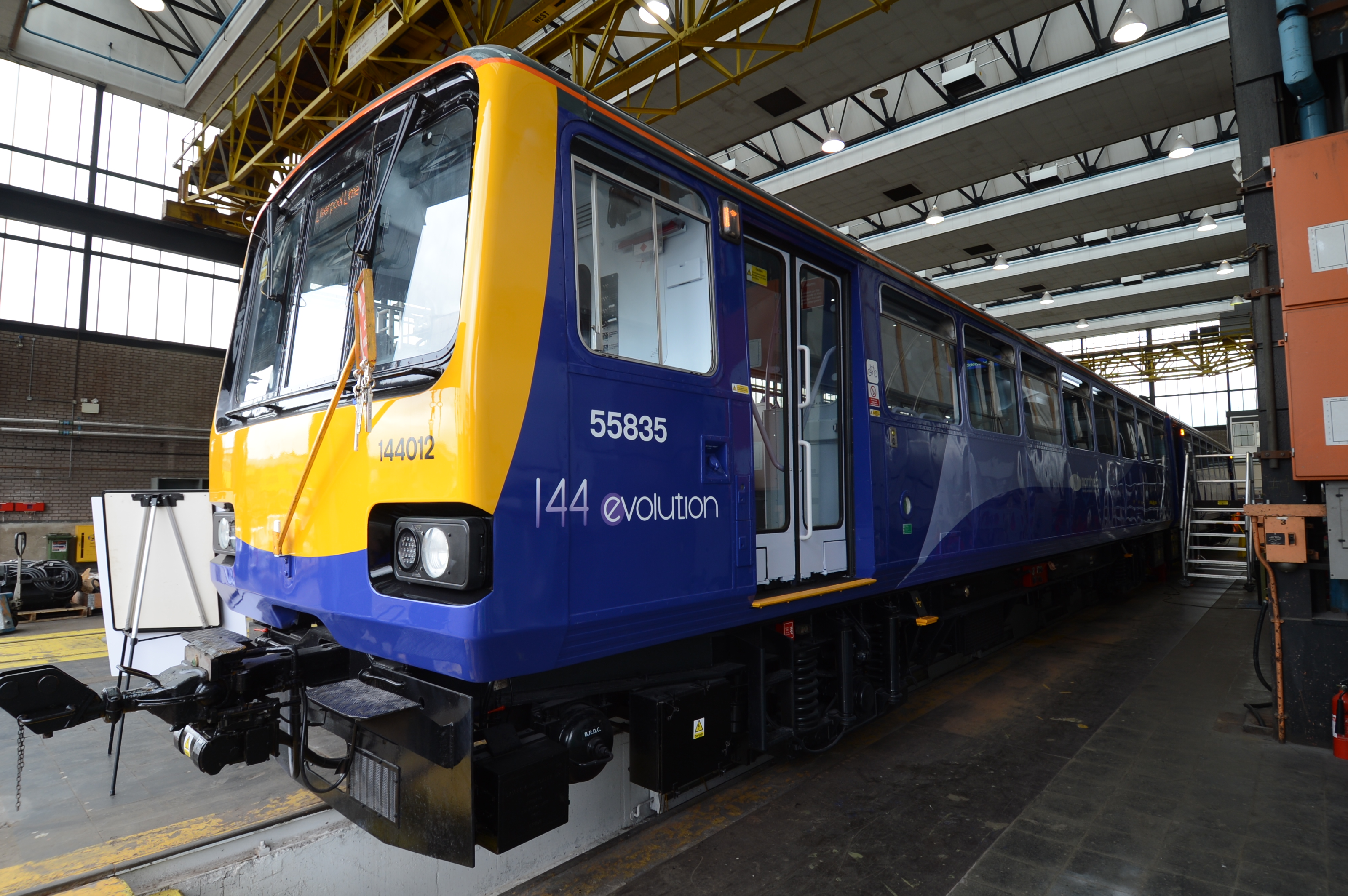 144012 sports a new livery. It also sports a new dot-matrix destination screen and a forward facing camera in the left-hand windscreen.

The interior seen from the two wheelchair spaces. 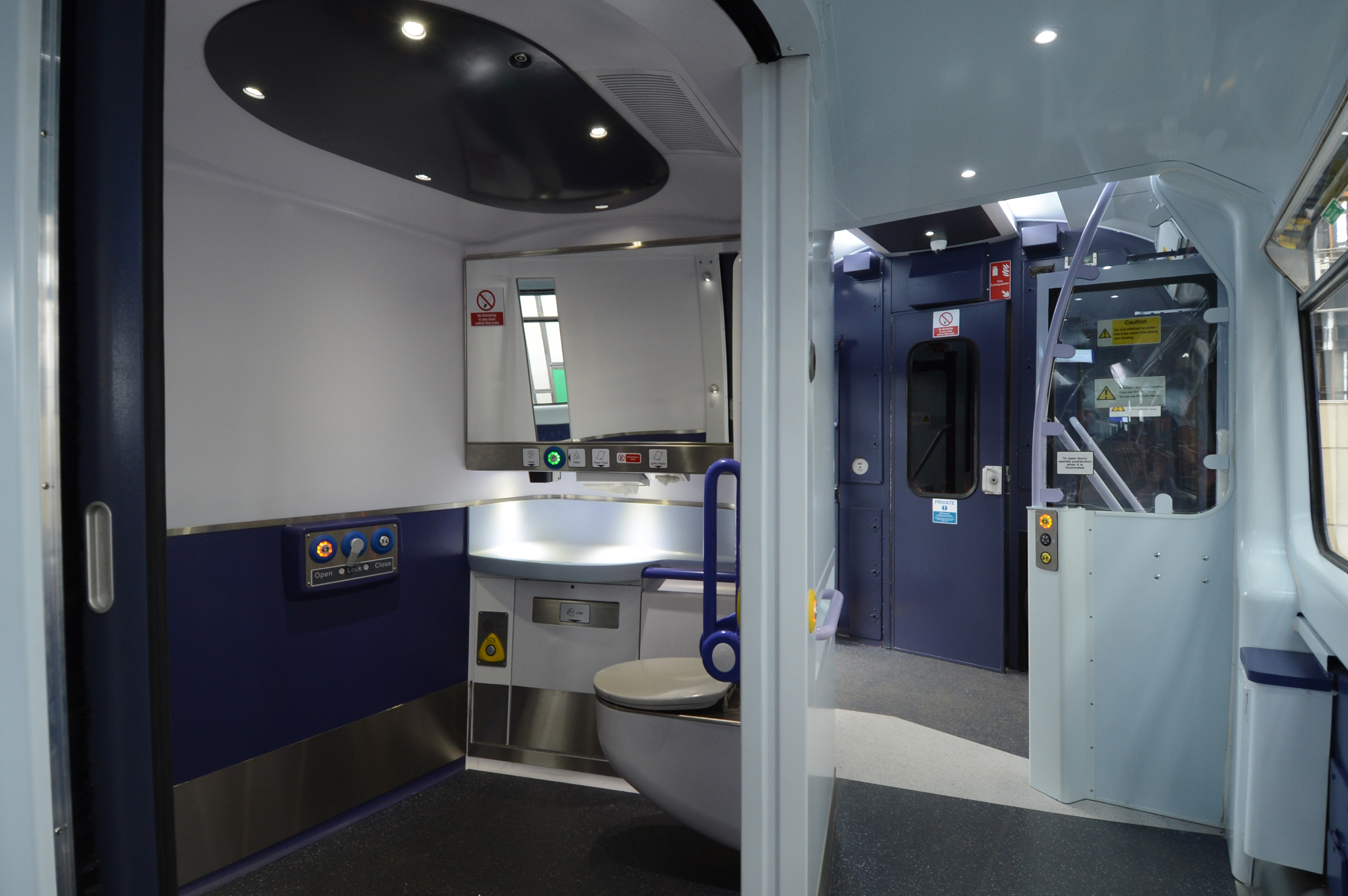 You can see a full range of pictures on my Zenfolio website here.