The bedrock of the Brexit campaign is the myth that the EU is “undemocratic”, so to “get our country back” (a nonsense phrase if ever there was one) we have to leave the EU. The lynch-pin of their argument is that European Commissioners aren’t elected – ergo the EU is ‘undemocratic’.

This argument falls for a whole host of reasons. Firstly, the European Commission is the equivalent of the British Civil Service. Have you ever voted for a civil servant? Of course not. We elect the people who direct the Civil Servants and the EU is exactly the same. Here’s a diagram of how EU democracy and oversight works. 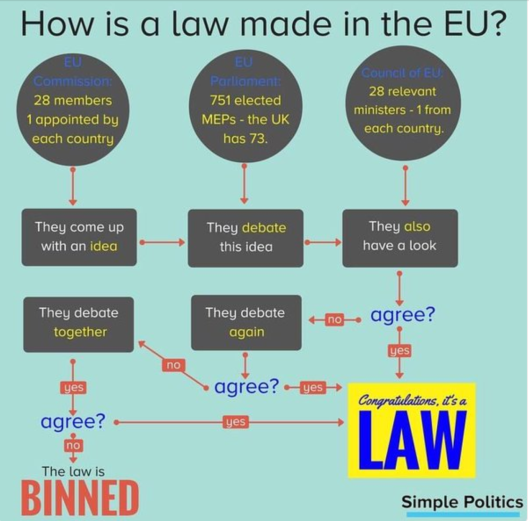 As you can see, no legislation can become law unless the elected MEPs agree. If they don’t the legislation is sent back to the commission where it’s either redrafted in the light of MEPs objections or it’s binned. The Commission cannot pass laws themselves. So, there’s genuine democratic oversight.

There’s another thing. Brexiteers are either incredibly ignorant of how Parliamentary democracy works in the UK, or they’re deliberately ignoring it. Here’s why. Have you ever heard of the 3rd Marquess of Salisbury? Or the 2nd Earl of Liverpool? As they’ve been dead for years you probably haven’t. OK, let’s try someone more modern. Lord Young? He served in Margaret Thatcher’s government. No? OK, let’s try someone bang up to date. Lord Adonis? He was Transport Minister in the last Labour Government. He’s now head of the Infrastructure Commission.

So, what do they all have in common? None of them were elected. In office they were unelected members of the House of Lords. Not only that but two of them actually served as Prime Ministers! All of them have done the very thing that gives the Brexiteers an attack of the vapours – despite being unelected they were responsible for making laws. Plus, let’s face it, you can’t get more politically powerful in the UK than by becoming Prime Minister.

Nor are these coves unique. You might have heard of another one, he’s one of our most famous Prime Ministers. His name? Benjamin Disraeli.

Oh, another thing. Who invited Disraeli to be Prime Minister and form a Government? None other than Queen Victoria. Now, just who elected her?

The Brexit camp claims that the EU is undemocratic are baseless. In fact, as history shows, by their own definition, the EU is more democratic than the UK!

I’m on the train to London & finally found a spare moment to blog. Today’s chosen subject is the referendum on the UK staying in the European Union (or Brexit for short).

I’m unashamedly pro the UK staying in staying in and I’ve been voicing that opinion loudly on social media. Of course, that’s made me a target for the the Brexit camp – and what a depressing insight into humanity that is.

Social media has become the modern refuge for the old green ink brigade as it’s given them a voice they never had before. Most newspapers & magazines (unless they were desperately short of copy for the letters page) would normally spike the most extreme rants, deluded nonsense and Walter Mitty fantasies. Plus, they wouldn’t risk publishing the full fledged racism for fear of falling foul of the  law. In contrast, the internet is far more of a free for all, which is what appeals to these characters. What also attracts them in their droves  is Brexit. Why our membership of the European Union attracts such extremists would make an interesting study into the human psyche – because there’s plenty of material to study!

These people are easy to find because they find you! All you have to do is tweet something in support of remaining in the EU using a hashtag like #Brexit or #StrongerIn. Within minutes you’ll have some anonymous creature with a name like “nocash no dash”, “Una Discamus” or “Roddytherobot” (they’re all genuine examples by the way) bombarding you with paranoid nonsense and made-up ‘facts’ about the EU. I do wonder why if the Brexit argument is so strong these people have to hide behind fake identities and spend all their time lying. Here’s another (genuine) example. 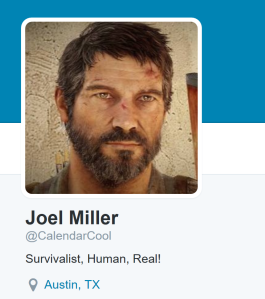 An American ‘survivalist’?  God help us…

One thing they all seem to have in common is an unhealthy obsession with Hitler and Nazi Germany. The irony here is that they love to label the EU as a ‘fascist’ state & compare it to the third Reich. Of course, the EU is so ‘fascist’ and we’re so controlled by it that, err, we’re able to hold a referendum on leaving!

Apart from attracting those with an unhealthy obsession with fascism, Brexit also seems to attract the Walter Mittys. Here’s a prime example.

This one bombarded a few of us with a stream of Tweets along these lines, so I spent a few minutes on Google and found this. As soon as I posted the link Haseler blocked the folk he’d been bombarding and ran away!

All this would be funny were it not for one thing. Many of these ‘characters’ will be real people and a lot of them will actually have a vote in the referendum. Paranoid nonsense, Walter Mitty fantasies or not – they could help propel us out of the EU and wreck the future of the UK. They don’t just exist on social media either. The other day I had a depressing ‘discussion’ with one such individual who’d swallowed all the newspaper garbage and genuinely believed Tony Blair had sold a UK warship to a secret EU navy (I know, I know – but try telling them..)

That is why I’m no fan of referendums – especially on complex issues such as membership of the EU. Our future could be decided on by the paranoid, the ignorant or the plain delusional!

This is why I’m appealing to all right-minded people to make damned sure they get out and vote in the referendum and leave nothing to chance. I’m also appealing to younger people (who are less likely to vote). After all, the future is yours – but you could find it’s set for you by a bunch of fearful old people who’re more likely to vote than you are, and once we’re out, there’s no going back…

When is applying the long-established rules of Locus Standi (The right or capacity to bring an action or to appear in a court) and the letter of the law “undemocratic”, “dictatorial” or trying to “over-rule 750 year history of representation”?

Never – unless you live in the weird parallel universe inhabited by Andrew Gilligan and the rest of the anti Hs2 mob!

As I predicted in my last blog, the petitions to the House of Lords are facing far more Locus Standi challenges than the earlier petitions to the Commons. 414 of the 821 are subject to challenge. This has provoked squeals of outrage from stophs2 campaigners and the usual fact-free rubbish from Andrew Gilligan (see here) and Joe Rukin (here).

Of course, what they all neglect to say it that whilst this is the Govt and Hs2 Ltd bringing the challenges, it’s up to the House of Lords Committee to judge if those challenges should be allowed. The Committee is Chaired by Lord Walker of Guestingthorpe, who just happens to be a QC with a long history of senior judicial appointments which include being a High Court judge, Justice of Appeal, Lord of Appeal and Justice of the Supreme Court of the UK. With such an august legal mind Chairing the Committee it’s going to be almost impossible for Hs2 antis to get away with screaming ‘foul’ on this one – hence their anger.

StopHs2 campaigners know this was their very last throw of the dice. Yet again, they’d hoped they could bog-down the process of the bill with repetitive petitions only this time, they weren’t going to be allowed to get away with it. The Govt and Hs2 Ltd had been very generous in the commons by challenging so few petitioners. In their final report the House of Commons Ctte had this to say about Locus Standi;

So, what’s happened shouldn’t come as a surprise to anyone. The Govt and Hs2 Ltd are simply exercising their legal right to challenge petitioners standing and a very senior and experienced legal mind is chairing the Committee that will rule on their validity.  Expect the majority of the challenges to succeed.

The past few months have been awful for the Stop Hs2 campaign. It’s been rendered pointless by Parliament voting through the Hs2 bill with a stonking majority. Its woes have increased as the bill continues to make solid progress towards Royal Assent. The bill also passed 2nd reading in the House of Lords. Now the Lords has chosen the members of the Committee to hear the 827 petitions. As expected, HS2 antis have stuck in as many petitions as they can, hoping the tactics that failed in the Commons will achieve something in the Lords. The composition of the HoL Ctte (it’s chaired by a QC) makes this far less likely as the committee will be no pushover. They’re expected to be far tighter on procedure than the Commons so expect far more Locus Standi challenges.

Meanwhile, the organised anti Hs2 campaign has fallen apart. In 2010 there were four main groups opposing Hs2, this has been reduced to two (Hs2aa & Stophs2) but only the latter is still active. Apparently skint and demoralised, Hs2aa have retreated into representing the Nimby interests of their Directors. Hs2aa have tried the fact by blaming their lack of action on a serious denial of service attack which had taken their website down for a couple of months.

Silence them? What they neglect to mention is they still had two other options with which to continue their campaign: Their Facebook page and their Twitter account. So, what’s happened? Nothing. Neither account has seen any action since March 6th! 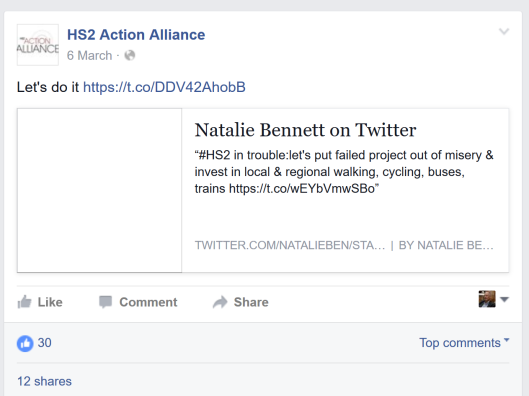 The truth is, most Hs2 antis have given up, even on social media – which has been their main campaigning tool for years.

This is yet another lesson in the pitfalls of social media for other campaigning groups to learn. Social media is a mirror on your soul. It can reflect your strengths but it can also expose your weakness. You can’t hide the tumbleweeds…