06:45.It’s a beautiful morning here in Glasgow, a real contrast to the stormy weather I saw yesterday, although I’m not sure how long it will last. I’m about to head down for a quick breakfast before heading to Glasgow Queen St and my first train of the day. I’ll be catching the 08:00 to meet up with Pip Dunn in Falkirk. We’ll be heading to Edinburgh where we’ll be starting our Scottish train tests. I’ll update this blog throughout the day as we go…I rarely eat anything like this, so a full Scottish breakfast at my hotel is a treat. I justify it on the grounds that I’ll soon burn it off with the amount of walking I’ll be doing today!

07:59.Having walked to Charing Cross and caught a train to Queen St I had time to look around and grab a few pictures before catching the train I’m on now (the 08:00 to Edinburgh). Times have certainly changed here. Not only is the station undergoing another huge rebuild, the fleets using it have changed too. 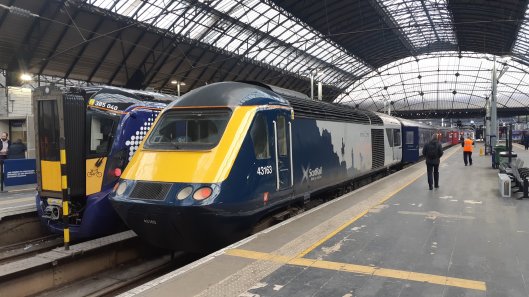 I still can’t get used to seeing 4-car High Speed Trains! This is one of the unrefurbished sets. The power cars carry Scotrail branding but the coaches are still in the old First group ‘dynamic lines’ livery. Another noticeable difference at Queen St is how many services are operated by the Hitachi built Class 385s, including the recently electrified line to Alloa

Having met up with Pip, we’re now on one of Scotrail’s refurbished HST sets. The 09:28 Edinburgh to Aberdeen. You’ll be able to read the full train tests in future editions of RAIL magazine. Here’s a couple of pictures for now. 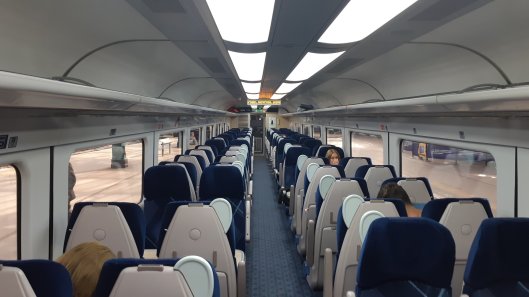 I’ve been kept busy photographing all the changes and features of the train whilst Pip’s been busy with his tape measure and notepad. Now I can relax for a bit and enjoy watching the beautiful Fife countryside flash past the window for a while.

We only went as far North as Dundee, the town on the Tay that’s transforming itself. The waterfront around the station (and the station itself) are unrecognisable from just a few years ago. It also gives fantastic views of the famous Tay Bridge. 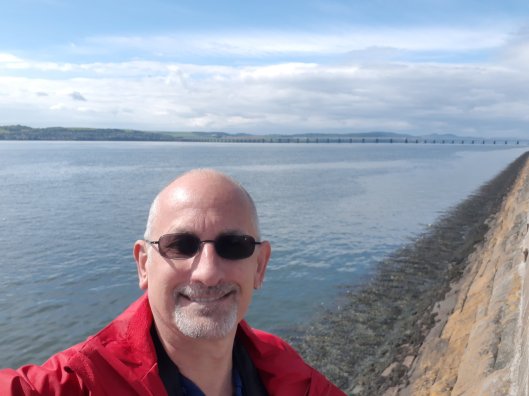 From here we picked up an unrefurbished HST to carry us to Stirling, another station that’s been transformed by electrifying the lines through the city to Dunblane and Alloa. Unfortunately we left the sunshine behind in Dundee. Perthshire’s covered in thick cloud and showers.

We’ve been busy! After revamping from our HST in a soggy Sterling we caught up with another of our targets in the form of Hitachi’s new Class 385 electric trains. A quick trip to Dunblane and a return to Glasgow Queen St provided us with all the pictures, data and measurements we needed. We then walked through the rain to Glasgow Central, hoping to catch a Siemens built Class 380 over to Edinburgh. Disappointed, we found out that it was another Hitachi set, so we quickly changed plans and leapt on a 380 working the branch to Gourock, which us where we’re heading for now!

Sorry for the gaps in the blog but it’s been a very hectic day. After abandoning this train at Port Glasgow we made our way back to Glasgow, then crossed between Central and Queen St to head back out to Edinburgh for a final burst of pictures and note-taking. Pip headed off to prepare for another job whilst I had time to catch up with an old friend an colleague from RAIL days – Phil Haigh. After which I shuttled back to Glasgow to get a few more pictures, then bumped into these Gentlemen outside Central station. With all the political shit that’s going on right now and the disturbing rise in racism and intolerance it was an absolute pleasure to encounter these three guys from the local Guru Nanak Sikh temple who were out in the rain, distributing food to homeless people. 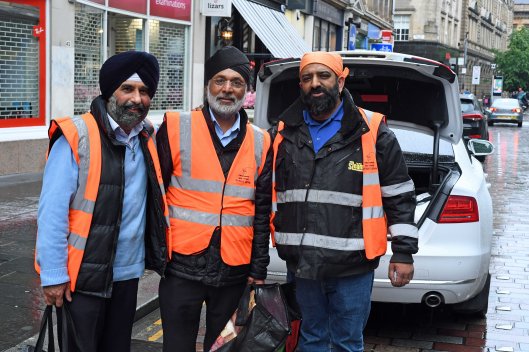 OK, I’m off to bed. It’s going to be another long day tomorrow and a busy few days after that. G’night!