After a night at home I’m heading back to London this morning as I have a job to do early tomorrow that’s not entirely unconnected with a wedding taking place near London. Meanwhile, it’s a bright sunny day and ideal for travelling, so expect a few observations and pictures from my wanderings today. Here’s the first, taken on my walk to the station from a winding cobbled road under the Wainhouse tower. I love this view!

That’s Sowerby Bridge down there. I’m always amazed how green it looks now the trees are in leaf because if you looked at the same view just 50 years ago it would have been denuded of the vast majority of the woodland. This would have been an industrial, not a pastoral view.

I’m now in Halifax, waiting for the London train after popping into the town’s Borough market to buy breakfast. It’s a lovely Victorian building which has this clock as its centrepiece. 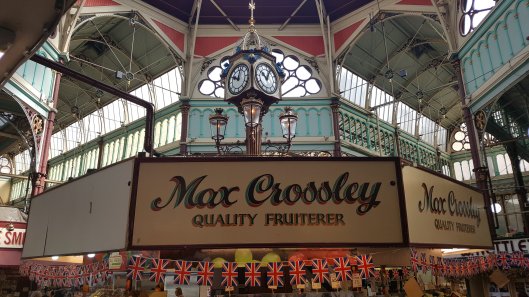 Despite not being as busy as it once was it still has a delightful variety of stalls selling all manner of things.

14.15. I’m now in London after an easy trip down the East Coast with Grand Central. Sadly, it was on one of the class 180s they’ve recently acquired from GWR, not one of their newly refurbished sets which I had the pleasure of travelling in on Wednesday. Here’s how the new Standard Class seats look in 180104; 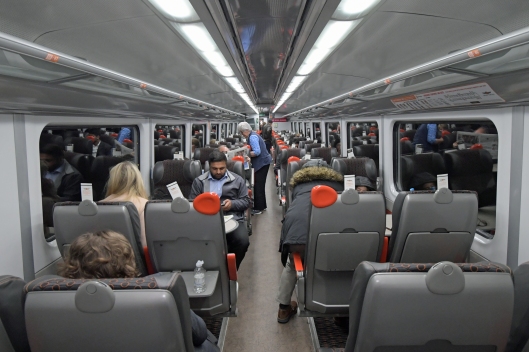 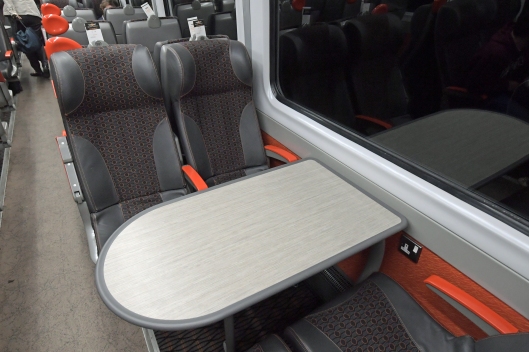 A table bay of four showing off the new seat trim and moquette. I rather like the way the exterior orange stripe has been replicated on the inside.

After taking a short break to organise a new commission on Monday (which involves another overnight in London or Brighton) i’m on the move again, passing through the perpetually busy Liverpool St station.