Earlier this week I was a guest of Siemens and GTR, who allowed the press to have a look at the new Class 717 trains Siemens are building to replace the 42 year old, BR built Class 313s that work services from London Moorgate to Hertford North and Welwyn Garden City. The 313s are the oldest trains still in daily passenger service on the UK mainland. Having travelled over 150 million miles in their careers, they’re overdue retirement.

Their replacements will be 25 6-car variants of the Desiro City. GTR already operate them as the Class 700s on Thameslink and Great Northern services in 8 and 12 car formations but the 717s are different in several ways. The main difference is that, because they have to work though the old single bore tunnels to Moorgate, they need to have a door in the cab front to allow passengers to be evacuated in an emergency. Unlike the 313s which use an old wooden ladder, the 717s are fitted with a folding staircase which can be deployed in seconds, either by train crew or passengers.

Here’s a video of the staircase being deployed.

It’s safe to say the 717s are an enormous step-change from the old 313s as they’ll have air-conditioning, plug sockets, free wifi, a passenger information system (PIS) and an area for persons of reduced mobility. As the seats are cantilevered off the side of the body they’ll also have a lot more luggage space as well as be a lot easier to keep clean. The seating arrangements are also more spacious as they’re 2+2 not 3+2. Plus, there’s no chance of the seat squabs being thrown out of the hopper windows by vandals as often used to happen on the 313s! As the 717s are 6 cars with open gangways and not 2 3 cars coupled together they can carry a lot more passengers (albeit with less seats). Here’s the numbers.

As someone who used to live on the route and used these trains regularly I think this is the right balance. There’s no point in having more seats on a train if you can’t get on it to get to work and have to wait for the next one! But in the off-peak there should still be sufficient seats.

Other differences include the fact that, whilst the 313s maximum speed is 75mph, the 717s is 85mph. GTR told me that the higher speed, along with the 717s quicker acceleration and better braking will allow some minutes to shaved off the present timetable in the future. Also, the 25 717s will be covering 21 diagrams, so the slack in the fleet will allow for extra service to be introduced at some point. Reliability is a factor too. The MTIN figures (Miles per Technical Incident = failure rate) for the 313s is 6,000 whilst the 717s will be at least 10,000.

Right, enough of the number crunching. Meanwhile, over in Germany we started our day at Siemens Krefeld factory where the 717s are being built. First on the agenda was a briefing by Siemens (the train builders, GTR (the operators) and Rock Rail (the financiers). Here’s Richard Carrington, Siemens Project Director, rail systems giving us a run through of the project.

After a thorough briefing on the 717s,  gave us a tour of the production line. Here’s the birth of a 717. After the individual aluminium sections are welded together the windows and doorways are cut out.

This is the upside down underframe of a 717 . Workers are positioning and welding in place brackets and other components. These used to be positioned using templates. Now, lasers mounted overhead mark out the positions.

In a building known as the ‘Cathedral’ the different body-shell parts (sides, floor, roof and ends) are welded together.

Once the bodyshell is complete it’s cleaned down before being taken to the paint shop where it’s given the livery of the company it’s going to be used/owned by.

Afterward the paint job’s been applied the shell is transferred to the fitting out line for final assembly. In this next picture you can see what’s behind all the cosmetic panels passengers will never see.

Here’s two cars from 717015 on the assembly line. A few months before, this area and the bays to the right would have been full of Class 700 vehicles. The big TV screen in the foreground records how the construction of each car’s progressing. 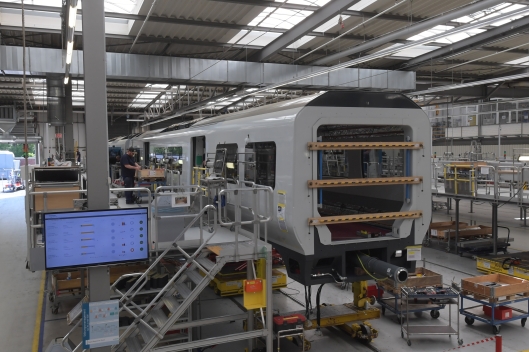 One of the cars from 717014 in final assembly, having its seats fitted. 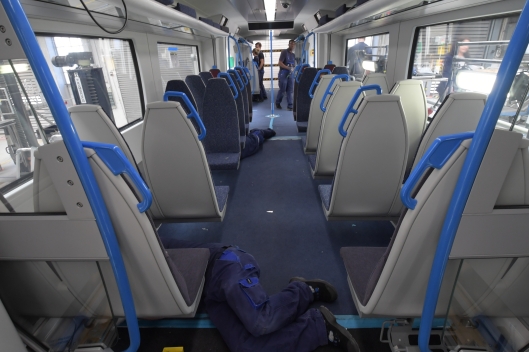 Before leaving Krefeld for Wildenrath we were given the opportunity to try out the emergency ramp on one of the lead cars of 717013 which was ready to leave the factory. It’s a far better system than the little wooden ladders used in the 313s and capable of evacuating 30 people per minute. Even so, I hope I’ll never need to use one of these for real! 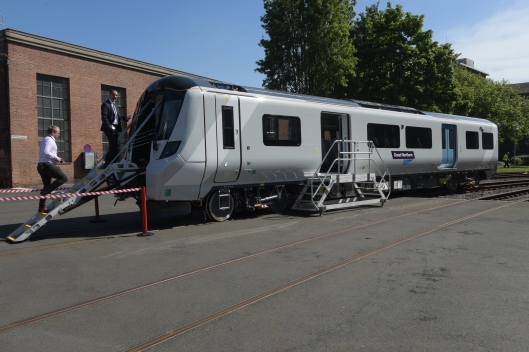 Here’s the group, including staff from Siemens, Rock Rail and GTR.

The next part of the day was a chance to see the 717s on the test track at Wildenrath (a former RAF airfield) which has several different loops for train testing, the largest of which is just over 6km. Sets 717001-012 were already at the centre, with several inside the 410m long shed that had been built as part of the Class 700 programme. Here’s 717005 and 004. 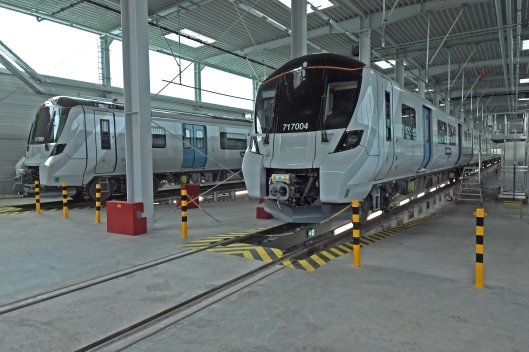 The highlight of the trip was the chance to travel on and explore a completed set, then take turns to drive it around the test track!  Here’s the cab layout of the set concerned, 717003. As you can see it’s very different to a 700/707 cab due to the gangway. Some of the controls have been mounted on the door which closes off the cab from the gangway when it’s not in use. When it is, the door’s swung out at an angle before being locked in place.

Here’s a look through the train, as you can see, it’s a step-change in quality from the 40 year old class 313s.

I’ve added some more pictures here to show details of the seats. Here’s a standard pair showing how much space is underneath them because of the way they’re cantilevered off the body side 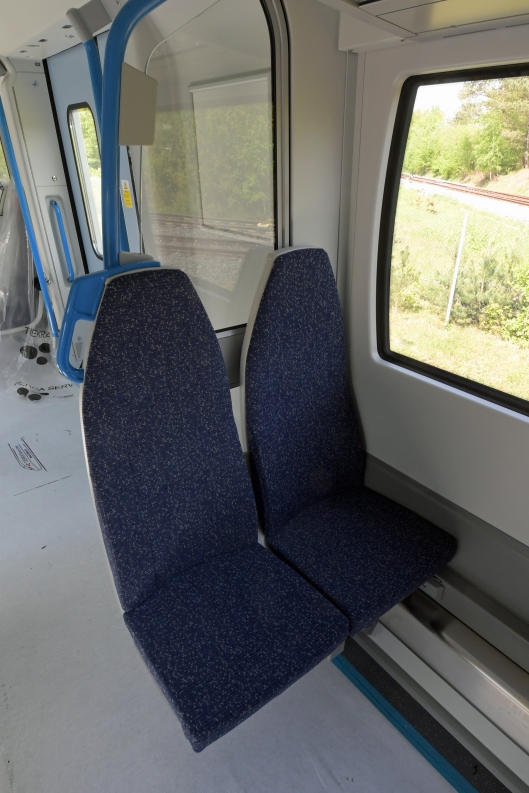 Tip-up seats adjacent to one of the doors. 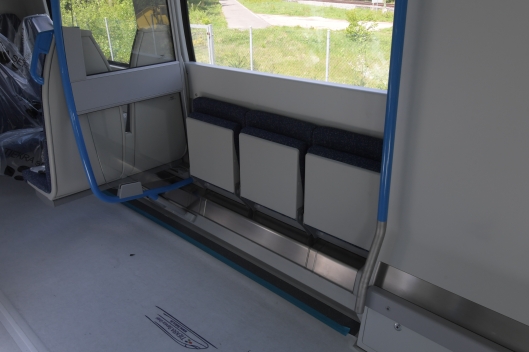 A Priority seat (that’s marked multiple times) right next to the wide doors.

Finally, 717003 whizzing around the test track. Soon these will be a common sight on the ECML between Hertford, Welwyn and London. GTR told me that as each 717 is accepted into service a pair of 313s will come off lease and be returned to the ROSCO until all 44 Class 313s used by GTR are replaced

If you want to see more pictures from the trip, follow this link to a gallery on my Zenfolio website.