Christ, if this is what life’s like when we’re meant to have loads of time on our hands due to lockdown, can I have my old one back, please?

My best intentions of getting up early went out of the window this morning and for the first time in ages I didn’t get out of bed before 08:00 which was a bit of a surprise as I distincly remember being awake at 06:00 and thinking ‘I’ll just have another half an hour’. Damn those snooze buttons! I wouldn’t mind but it’s not even mine as Dawn has control of the alarm clock/radio.

Once the day started it was a busy,- if slightly different one. Dawn’s on her ‘virtual retreat’ for the next few days, so I’m doing everything I can so facilitate and support her doing it but it does mean we’re living rather separate lives for the next few days. Dee printed out her schedule activities and stuck it on the fridge in the kitchen so that I know what she’s up to and when so that I don’t disturb her at a crucial moment, like meditation. This means that the living room is very much ‘her space’ and I’m relegated to using the back door to come in and out, not that it’s a problem.

Yet again we’ve had another beautiful day, weather wise. I shadowed Dawn on her morning walk, which meant that I got a lot of steps in early which makes a change. Recently I’ve taken to getting in an evening stroll to boost my exercise. Whilst it’s technically breaking the guidelines it’s not a problem here as our road is deserted at that time of day. I can walk for half an hour and not bump into another soul or even see a car as everyone’s stuck indoors. Why wouldn’t they be – there’s nowhere else to go!

Back at home I disappeared into the office to spend several hours scanning more old slides, The job’s no less tedious but at least I’m slowly making progress, although it is rather frustrating being stuck inside when the weather’s so good! I’d love to be out and about with the camera, but discipline’s required right now and it means I’m getting something positive out of lockdown.

Once immersed in scanning the day soon flew by. I’ve both laptops on the go at the moment so that whilst I’m scanning with one I can be watching Netflix or the BBCiPlayer with half an eye on the other. Sometimes the distraction’s provided by birds visiting the feeder hung outside the office window as it sees a constant stream of Tits who come to plunder the sunflower seeds I keep it filled with. I avoided the VE celebrations on TV, preferring to remember those who fought and lost their lives in my own way rather then join in what was starting to feel like a jingoistic celebration rather than a reflection on events. No doubt many would disagree with my interpretation, but then there does seem to be a coercive element to these things nowadays, rather like the ritualistic clapping for the NHS on Thursdays. When people are shamed on social media for not taking part, you know that things have gone too far. This pressure is also being used to stifle criticism of the way the Government’s handling the Covid pandemic, with some claiming that it’s somehow unpatriotic to criticise as it’s a national emergency and we should all be ‘pulling together’ (whatever that’s meant to mean in this context). This authoritarianism and herd mentality worries me. It’s too close to the right-wing media and political parties tactics of labelling people ‘traitors’ for opposing Brexit. We seem to be sailing far too close to an Orwellian totalitarianism nowadays, and it’s disturbing how easily some people embrace it.

I knocked off slightly earlier than usual as it is Friday after all. I migrated to the bench in the front garden and sat with a beer, enjoying soaking up the glorious sunshine for a while until 6, when it was time to join the gang from the ‘Big 6’ for our weekly quiz session held on Zoom. Eight of us played this week, many of the gang joining from their respective gardens as they’d got the same idea as me. After weeks of lockdown and barely talking to a soul other than Dawn it’s great to have a semblance of normality restored by joining in the laughter and brain-teasers in the quiz, although I’m looking forward to the day we can restart this where we should be – in the pub!

The rest of the evening passed off quietly at home with the pair of us keeping occupied in different ways. I managed to upload more of my haul of edited pictures to my website, so felt the week ended well. Here’s a couple as an illustration. It’s a tale of two London stations… 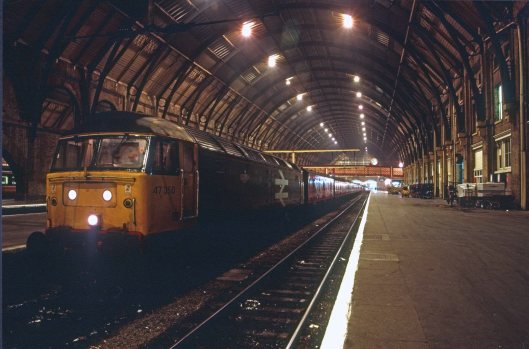 Here’s London Kings Cross on the 2nd February 1993. As it used to look before the recent refurbishment and when Mail trains still ran. It was far dirtier and more cluttered than nowadays, with lots of rubbish deposited on the oil-stained tracks. Railfreight distribution No 47350 stands at the head of a rake of vans carrying mail to the North. Class 47/3s didn’t normally operate these services as the locomotives had no train heating, so I’m assuming the booked engine had failed. 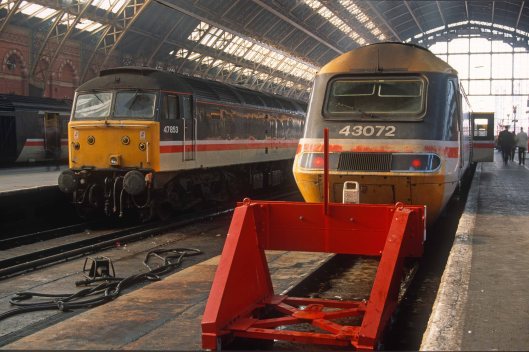 Here’s London St Pancras on the 19th March 1993, with a Class 47 which had arrived on a service from Nottingham standing next to an HST set which is waiting to depart as the 16:00 to Sheffield. It’s safe to say that the station doesn’t look like this anymore! This area is now home to Eurostars!

If you want to have a look at any of the other pictures I’ve added to my Zenfolio picture website just follow this link.

If you enjoy reading this blog, please click on an advert or two. You don’t have to buy anything you don’t want to of course, but the revenue from them helps to cover some of the cost of maintaining this site – and right now (because of Covid), us locked-down freelances need all the help that we can get…