Today’s been very much governed by the rain which has put the mockers on a lot of things, including any walking and also the change to get any decent scenic pictures of what’s a beautiful bit of Ireland. To be honest, the day started slowly anyway as poor Dawn went down with a migraine yesterday evening, which left her feeling woozy, so she had an early night and a late morning start. At first, the weather looked promising, so we stuck to our plan of driving over to pretty Kinsale on the River Brandon. But then we pushed our luck and ventured further West. Our first stop was at Courtmacsherry which is an attractive little village that’s spread out along a single long street on the southern shore of Courtmacsherry Bay. We stopped for coffee and cake (a rare holiday treat) at the Travara Lodge, a B&B with a lovely café on the ground floor and a garden on the banks of the Bay. You have to admit, the cakes do look tempting and the Pecan pie was gorgeous. 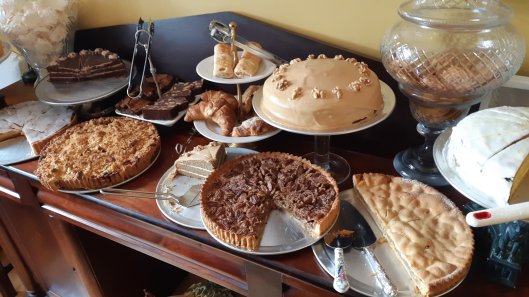 Like many places in Ireland, Courtmacsherry once had a railway station. The Timoleague and Courtmacsherry Railway finally closed in 1960 after many years when it was only used for summer excursions and freight. Part of it remains as a footpath which is marked by an old semaphore signal arm on a makeshift post.

The old station building in Courtmacsherry survives as a residential property.

The village also contains a memorial to the sinking of the liner Lusitania which was torpedoed in May 1915 and sank in 20 minutes, with the loss of 1,198 lives. The ship went down not far off the coast from the village.

Taking a gamble and really sticking our necks out we ventured further West through Clonakilty and Skibereen as far as Baltimore, a village with a harbour that serves as the ferry terminal for boats to Cape Clear, Sherkin and Hare Islands, as well as trips around the famous Fastnet lighthouse. The area’s popular with boaters so the harbour’s busy with yachts and other small craft. In the right weather it must be an absolutely stunning bit of coastline. Today was not that day! As usual, we arrived the same time as the rain which cut visibility to a few hundred metres. We cut our losses by taking up refuge in the local pub which had been recommended by a friend. Bushe’s Bar overlooks the harbour and contains a vast array of nautical memorabilia including lifebelts from some of the ships wrecked in the area over the years. The place is popular with both locals and visitors and serves food as well as a good selection of drinks. It’s certainly worth a visit. On a sunny day the barrel tables outside are especially popular. 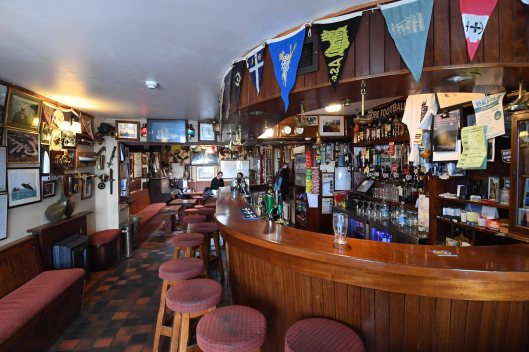 We hung around for a couple of drinks, hoping the weather would clear, but it wasn’t to be, so we gave up and headed back to Kinsale to eat at another recommendation, Fishy Fishy is (as the name suggests) a seafood restaurant just back from the River Bandon that specialises in locally caught fish. The menu isn’t huge, but what you get is delicious. I went for this, pan cooked Hake.

Suitably stuffed, we’re now lounging at our Airbnb before exploring Cork and Cobh tomorrow – and praying for better weather!