It’s been a long day already as I was working at 06:30, editing pictures from the weekend to get on my Zenfolio picture website. The beauty of having an office at home is the commute to work takes no time at all, even if I detour via the kitchen to make coffee!

That and a few chores done I’ve nipped out for a few hours to get some library shots in the sunshine before nipping back through Manchester to take advantage of the city’s excellent range of shops.

Well, that was a frustrating afternoon the nearly went awry! It started well enough. I’m not a fan of the Blackpool trains as there’s often too many screaming kids and drunks on ’em, but I was joined at my table by a polite young man who eventually struck up a conversation. He admitted that he wouldn’t normally, but a friend on social media had mentioned that people do talk on trains now as they’re too busy staring at their phones, iPads etc, so he thought he would. My camera sitting on the table provided the talking point. We spent an enjoyable half hour chatting about travelling as he’d just finished college for the summer and was off to work in Cyprus for the summer.

It was only when we got to Preston things went pear-shaped. It was obvious none of the new CAF trains were sticking to the STP (Special Train Plan) timings so I decided to head over to Blackpool in the hope of catching some there. The plan worked although I was surprised to see a couple of the electric versions (the Class 331) stacked in the sidings too. I managed a few decent shots and bag a couple of the units in and out of the station in the sunshine. 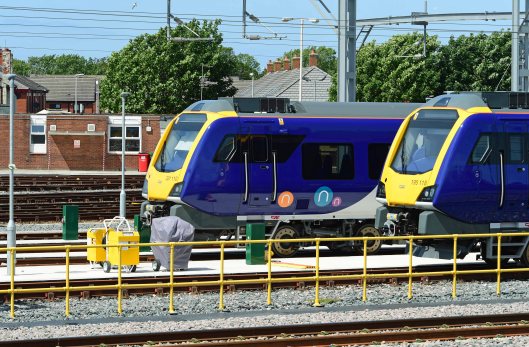 One is electric, the other diesel powered. Can you spot the difference?

Now I’m on my way to Manchester to do the less exciting bit and shop.

I’m finally homeward bound after spending a couple of hours tramping the streets of Manchester in search of a new suitcase as our last one bit the dust after a month in Mew Zealand & proved impossible to get repaired. I also had to visit the city’s new Uniqlo clothes store on a shopping mission for Dawn. Not trusting me to get the right ones she sent me a PDF if pictures and sizes which I’d printed off so I couldn’t get it wrong!

On the way to the station I saw an anti Trump demonstration by the National Football museum and couldn’t resist popping in. Organised by the Labour party, it was supported by just a few hundred people. 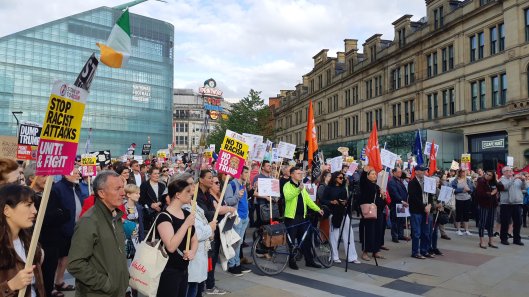 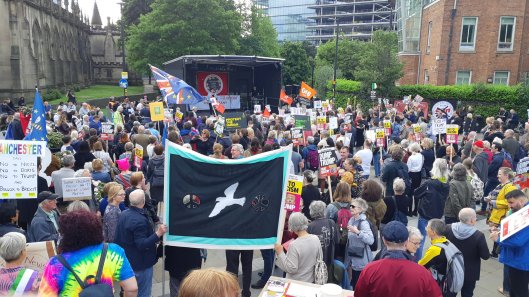 Now I’m rammed in the vestibule of the 18:37 Manchester Victoria-Leeds which has worked by a 2-car Class 150. As usual, it’s packed as far as Rochdale then eases off, giving everybody left aboard a chance to get a seat, which begs the question – is 2 cars plenty?

It’s almost time for bed, but I’ve been sorting out a few of today’s pictures first, so here’s one of the new CAF units seen at Blackpool North earlier today.