I’m out and about on the rails again today, making the most of the weather and getting client shots on a range of topics, including hunting down more of the news trains which are gracing the North’s tracks in increasing numbers, although many of them are on training runs rather than carrying passengers. At the moment, there’s vehicles for Northern, LNER and Trans-Pennine Express out on test, with more to follow for Hull Trains soon. This creates its own challenges. I was talking to LNER MD David Horne at the Azuma launch the other week. He explained that it was an ASLEF requirement that driver had 20 hours training driving the new trains before being passed out as competent. Real trains, not simulators. David pointed out how difficult it was to find paths for these trains on our increasingly crowded network – one that’s become even more crowded since the May 18th timetable change. Imagine what it’s like when you add in the other operators vying for space at places like Leeds, Doncaster and York, not to mention Manchester and Preston! It’s one of the unappreciated challenges of introducing new train fleets. Still, it makes me laugh at HS2 antis, who (cluelessly) still insist that no – we don’t need HS2 because some trains still have spare seats in the off-peak! 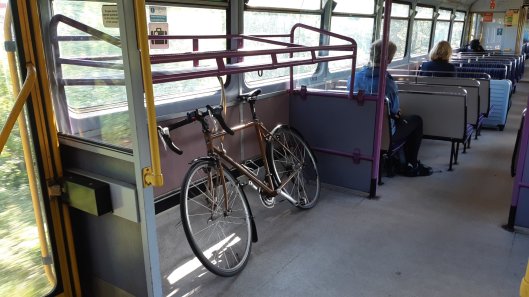 On arrival at Huddersfield my Oacer lash-up was split. The rear 142 was detached and scurried off, squealing, to the sidings, whilst the 3 car 144 remained in platform 4a ready to work the 10:03 to Castleford via Wakefield. I’m sure this is a new diagram as I don’t remember through services to the town before.

Huddersfield station layout is old and was built for a different age. It has two Easterly facing bay platforms (5 and 6) in the large island platform which are very restricted in length. 5 can only take 2 cars and 6, 3 cars. For a modern railway they’re a bit of an operational nightmare, hence plans to build a new through platform on the site of the stabling sidings to the North of the existing island platform. Here’s a view of the bays with a 153 in platform 5.

No 4 to the left is a through platform but its normally split and used for terminating trains coming from Mananchester in the West and Leeds in the East.

Making Huddersfield fit for a growing railway presents huge challenges. If you build a platform on the stabling sidings, where do you then stable the trains? There’s a train crew depot on the station. If you stable trains elsewhere, what happens to that? The station’s a grade 1 listed building, so how does that impact on major alterations? It all adds to the complexity and expense of rebuilding a Victorian railway network.

Today’s plan didn’t survive first contact with the enemy. I was planning to head East to York and Doncaster, then found that one of the new Hitachi bi-mode trains for Trans-Pennine Express was working a training run across the Pennines from Heaton (Newcastle) to Manchester Airport. I was very keen to get a shot of this so changed plans and hot-foot it to Greenfield station, the first stop on the line West of the Standedge tunnel. Slightly further East is the pretty and very busy tourist town of Uppermill which the railway passes high above on a dramatic viaduct, as you can see in this picture.

From here I walked along the Rochdale canal before cutting up a quiet lane to a lovely vantage point on a footbridge which gave me a commanding view of the lane and the valley, where I waited and prayed the cloud Gods would smile on me for once. Eventually, I managed to get this shot. For once I was glad the train was a few minutes late. If it hadn’t been, I’d have missed the sun!

Afterwards I couldn’t resist nipping down the road a few miles to pay homage at one of the original and best station bars in the country, the Stalybridge buffet bar. 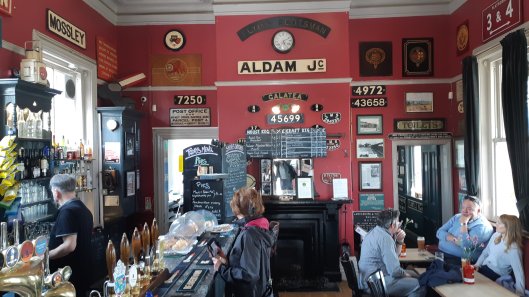 I’m glad to say it’s no longer a rare beast, just a long time survivor and precourser to a new generation of station bars.

I’m now heading back to Huddersfield on a late running Northern Pacer to meet my wife from work. Whilst the new timetable may not have caused any grief, I’m not sure it’s solved any problems on this line either. Late running still seems to be the norm, although I don’t know the root causes.