It’s a beautiful (if slightly chilly) morning here in Yorkshire and an early start for Dawn and I.

I’m currently on a Trans-Pennine Express service from Huddersfield heading for Manchester as I’m on my way to meet a colleague from RAIL magazine in Birmingham for a job in the West Midlands. As usual, it’s standing room only on the train. I’m looking forward to TPE introducing their new five-car “Nova 3” trains later this year as I might actually be able to get a seat and get some work done!

Hopefully, Cross-Country’s Manchester-Birmingam service might be a little less rammed. We shall see…

For once, the weather’s the same on both sides of the Pennines, it’s just as sunny here in Manchester as Huddersfield. My train’s an airport service via Manchester Victoria and the Ordsall curve. It’s been interesting to observe how many passengers embark/disembark at Victoria – more than I expected, suggesting this is a very useful service.

Sometimes trains running late can work to your advantage! When I arrived at Piccadilly I managed to catch a Cross-country service heading to Bournemouth which left 6 mins late as it was delayed on its inbound working. It’s a 4-car Class 220, so it’s quite busy but I’d no problem finding a perch as the seat reservation system’s not working. No doubt this could cause some fun and games en-route…

It looks like the 30 minutes I banked by getting an earlier train is about to be spent. Our Train Manager (who’s very good at keeping passengers informed) has just explained that we’re likely to be delayed by at least 20 mins as engineering work to repair a bad bridge bash didn’t take place last night. This means there’s reduced line capacity between Norton Bridge and Stafford.

Whilst I’ve been on travelling I’ve taken time to catch up on the news – which is a depressing and dispiriting experience nowadays as the Brexit shambles continues. The more I see of the political circus in Parliament and the spinelessness and unwillingness of most of our MPs to face the reality of the disaster that’s heading our way is horrendous. We’re living in extremely perilous times – yet our politicians are playing political games with no sense of urgency or signs of real leadership. We have a double whammy. We have the worst government in living memory and also the worst opposition. If someone had written this as the outline of a book, publishers would have rejected it as being too far-fetched – yet here we are…

We’re currently stationary and in a queue of trains waiting to get through Norton Bridge due to the bridge bash, which has reduced the West Coast Main Line from four to two tracks.

We’ve just started moving again and we’re finally approaching Norton Bridge (North of Stafford) to get onto the main line. We should have arrived in Birmingham 4 minutes ago! Now we’re stopped in the old platform at the closed Norton Bridge station as an intermodal has been put out in front of us, so I can see the delay getting worse… 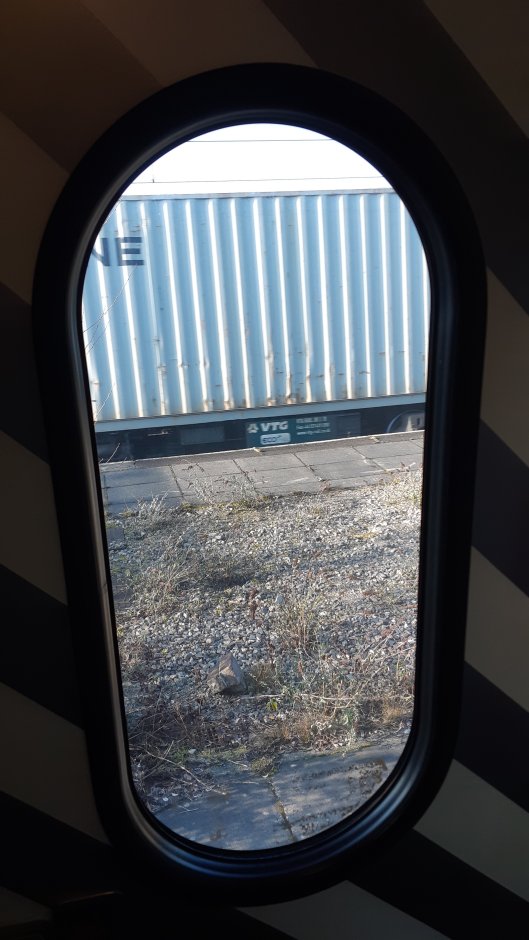 Marc, the Train Manager and the rest of the crew aboard are doing sterling work keeping passengers informed (and placated). The frustrating thing about this whole situation (which is going to cost the railway a LOT of money) is it’s down to a careless lorry driver who (So I’m told via social media) did a ‘runner’s despite hitting the bridge so badly they left a huge crack in the bridge parapet which has had to be removed. Here’s the view as we passed.

We’re finally pulling out of Stafford over an hour late. I’ll miss my appointment with Paul Stephen from RAIL and have to catch him up.

After a dash across central Birmingham from New St to Snow Hill I’ve caught the 11:13 to Stourbridge. Snow Hill’s a funny place. I’ve never understood why Brummies made it into yet another cheerless, subterranean station. You’d have thought they’d have had enough with New St, but no. They buried the reopened station under a multi-storey car park! 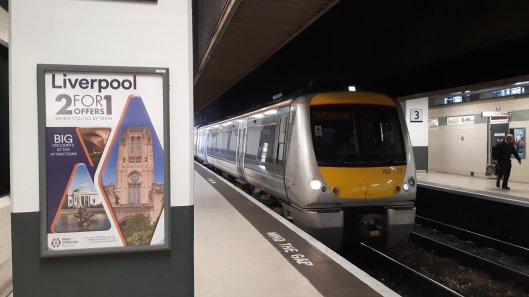 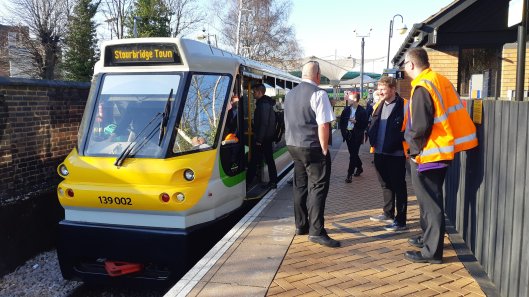 Now I’m heading North on another packed 4-car Voyager bound for Manchester. Hopefully, this one will make it past the bridge bash without delay.

Hooray! All four WCML tracks are open and we’ve passed the bridge bash without delay.

Another phew! I had a 6 minute connection at Manchester Piccadilly but my XC service crawled through South Manchester and arrived 5 late into platform 5. It was only the fact my train door was aligned with the stairs and the TPE service from platform 14 was a minute late that I managed to sprint across the footbridge and make my connection with 30 seconds to spare!

My journey was short, only as far as Manchester Victoria, where I had the luxury of yet another 5 minute connection but this time it was with our stress! I’m now on the 17:20 from Victoria to Leeds which is formed of a curious and creative coupling. A former Scotrail Class 158 (789 for those who care about these things) and a venerable Pacer, 142091! Masochist that I am, I chose the Pacer!