– just a couple of problems. I’m going to a country outside of the Brexit madness – but it’s only for 48 hours. Will I return from Germany to a country that still has a Government – much less one that’s actually in possession of its marbles – who knows! What will be lovely is to spend some time with friends and colleagues in Germany away from all this madness in a fully-functioning country. I’m off to have a look at Siemens new Mireo train, then spend a night in Dusseldorf, where I want to visit the Christmas Market. That means this rolling blog will keep rolling for some time. I’m going to put it on hold right now so as to get some sleep before my flight…

I’m now awake and guzzling coffee airside at Manchester airport. Judging by the security kerfuffle here Manchester thinks it’s special. For the first time in all my years travelling security insisted that – not only did I have to remove my shoes and belt but my meagre supply of toiletries (none over 50ml) just *had* to be put in a plastic bag and my camera also must be removed from it’s camera bag and be put in a separate tray to the rest of the kit. Utterly pointless of course, but that’s Manchester Airport security for you. It’s why airports are such a miserable experience nowadays, arbitrary rules that make no sense but are justified on the grounds of ‘security’ so you can’t question them. Mind you, I’ve never been a great fan of this airport anyway. It’s cramped and messy, not exactly a great advert for the city it serves. It’s also packed. Looking around the lounge it seems to be mostly leisure travellers, there’s very few people who look like they’re here for business.

The flight wasn’t bad. I was flying with Eurowings for the first time and they seem a decent airline. The woman pilot warned that there was very bad turbulence in our sector, but we got very little. My only complaint was that the whole of the trip took place with the ground blanketed in cloud. You couldn’t see a thing! Here’s how it looks at Dusseldorf airport.

Now to head to town..

The weather’s no better in central Dusseldorf than it was at the airport, so it’s not a great day for picture taking, although I’ve got a few. I think tonight should be good as wet weather and night time are ideal partners.

I tweeted a couple of pictures earlier to try and dispel a couple of the myths about German railways that are popular in the UK because of rail privatisation. Here’s one – that German railways are nationalised. Really? Here’s a local service to Cleve at the Hauptbahnhof. It’s run by Transdev, a private company who run trains in 6 countries.

The myth that German trains are far more punctual than in the UK was exploded by having a look at the board. There’s Intercity services up to 110 mins late!

Siemens picked up our group and brought us the the PCW at Wildenrath, where the first Mireo was officially unveiled. 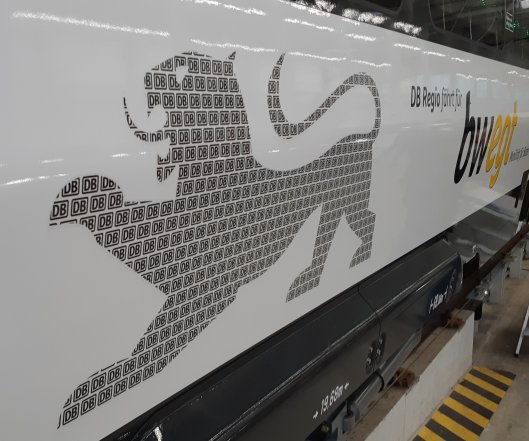 DB Regio has ordered 24 of these 3-car, articulated trains. Eight pre-production units will be built and tested here before the Mireo enters public service in June 2020. I’ll blog more about the Mireo separately.

We’re now on the coach back to Dusseldorf. Needless to say, it’s now pitch black outside, but at least it’s dry! I’m looking forward to checking into my hotel, uploading some pictures, then going for a wander…

It’s been a mild night here so I’ve had a good wander and visited the Altstadt (old town) to see the Christmas Market, which was lovely – and watch the world go by whilst drinking Glühwein. Here’s a few pictures from the evening.

Lovely, isn’t it? This is trees either side of the Stadtgraben neat the old town at night. 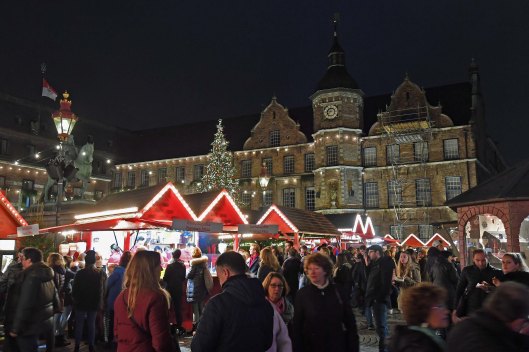 Chritsmas market in the square with the Rathaus as a backdrop.

It does get a tad congested around the Glühwein stalls in the market square.

Glühwein – such a lovely drink on a winters night. 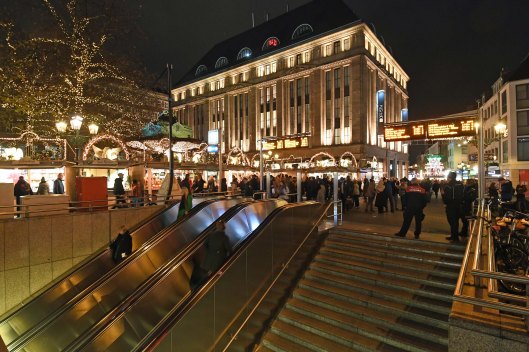 Right, it’s 22.47 here in Dusseldorf and I’ve got a fun packed programme ahead of me before I fly back tomorrow, so I’m putting this rolling blog to bed. Goodnight!