I’m up at sparrow-fart again for the fourth day of judging the ACoRP awards. Today it’s the turn of three stations in the East Midlands Trains empire. As they’re difficult to all visit by rail we’ve conscripted the help of Donna Adams, their Community Rail Officer who’s hoping to arrange alternative transport. Right now I’m on my way to Nottingham to meet up with her.

After weeks of continuous sunshine this morning’s walk to the station was actually in the rain! Well, when I say rain it was more of a drizzly shower that did little else but wet the pavements before it trailed off, but it’s a start!

My first train of the day is Northern’s 06:03 from Halifax to Leeds. I caught the same train yesterday wben it was a 3-car. Today that’s been reduced to 2, so I expect it to be rammed when it leaves Pudsey later. Right now, after stopping at the new station at Low Moor it’s on the comfortable scale. 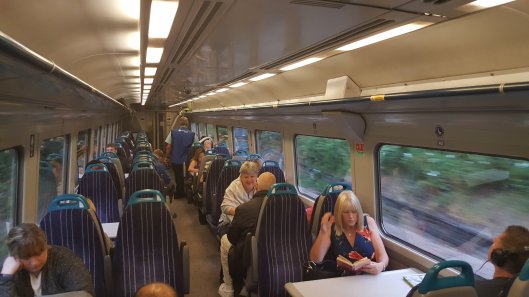 Sure enough, after stops at New Pudsey and Bramley it’s now standing room only. Or (in my case) sitting in a luggage rack!

Hopefully I’ll get a better perch for the next leg of the trip as it’s another two hours to Nottingham from Leeds.

Well, there was no danger of having to stand on the 07:03 to Nottingham! The inward bound service was packed but this is very civilised.

I’ve a table bay of four to myself right now so it’s time for breakfast, which is a little more down-market compared to yesterday’s lunch!

After which I might treat myself to a powernap…

At Sheffield we swapped our commuters for a slightly smaller and mode mixed batch of passengers which includes a rather Mr Bean like character sat opposite who’s travelling bare-foot!

Bare-foot man got off at Dronfield. Now, after a couple more stops, the train is full again, this time carrying commuters bound for Nottingham.

Phew! Another busy day that’s seen me explore parts of Lincolnshire I’ve never visited before. Well, I’ve seen the stations but never visited the towns themselves. Again, I’m not going to go into too much detail but I’ve met some brilliant station groups and seen first-hand the excellent work they’ve been doing. Here’s just one example. Last time I passed through Market Rasen station it was a scene of dereliction. Just look at it now!

After we’d finished I bid au revoir to my EMT guides at Lincoln (another station that’s had a make-over since my last visit). Now I’m heading home via Northern’s 17:22 to Leeds – although I’ll probably stop off on the way…

As my return was via Sheffield I couldn’t resist stopping off at the Tap. Judging’s thirsty work!

After a ‘swifty’ and chance to download the camera into thr laptop I headed on to Leeds on a Cross-Country Voyager. Then things started to go wrong. We were held outside the station due to congestion, so arrived 8 mins late. I still had 9 mins to make my connection so I wasn’t too concerned, especially as it was essentially a cross platform interchange from 7 to 6. Then the train that pulled in was a Class 322 EMU! I know it wasn’t going to Manchester (unless Network Rail electrified the line since this morning!) but it did confuse ordinary passengers! Then it was announced our grain was leaving from 5c. Off everyone dutifully trotted but the 158 was locked. Eventually the driver turned up, apologised for the delay ans explained he was waiting for the Guard to turn up. 10 mins after we should have left we were all told to go to platform 12c and catch the 20:39 instead! By this time passengers were getting hacked off at being mucked around (again). I can’t say I was too pleased either as it took the shine off what had been a really positive day.

And here we are… 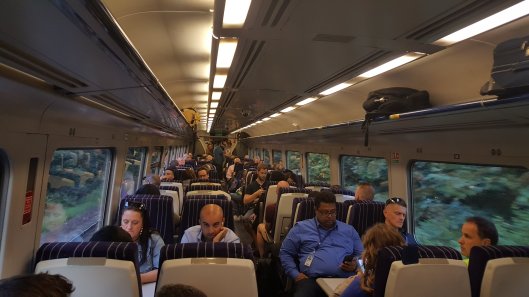 At least we left on time! Tomorrow I get to do all this again as I’m on the 06:03 to Leeds, then on to Derby for another day’s judging. Watch this space…