Sadly, my prediction from a couple of days ago that Parliament abdicating responsibility for democracy would speed up the brexodus has already come to pass. The juxtaposition of two headlines on the front page of today’s Times sums up Brexit perfectly.

We’re about to lose thousands of skilled jobs and £bns in revenue to the Exchequer if Airbus, but hey people, fruit picking isn’t as bad as you thought!

Airbus’s stark warning to the Government has been published on their website. You can find it here. This is part of it (with my highlights):

“Tom Williams, Chief Operating Officer of Airbus Commercial Aircraft, commented:
“In any scenario, Brexit has severe negative consequences for the UK aerospace industry and Airbus in particular. Therefore, immediate mitigation measures would need to be accelerated. While Airbus understands that the political process must go on, as a responsible business we require immediate details on the pragmatic steps that should be taken to operate competitively. Without these, Airbus believes that the impacts on our UK operations could be significant. We have sought to highlight our concerns over the past 12 months, without success. Far from Project Fear, this is a dawning reality for Airbus. Put simply, a No Deal scenario directly threatens Airbus’ future in the UK.”

Here’s a hollow laugh, remember when David Davis said this? 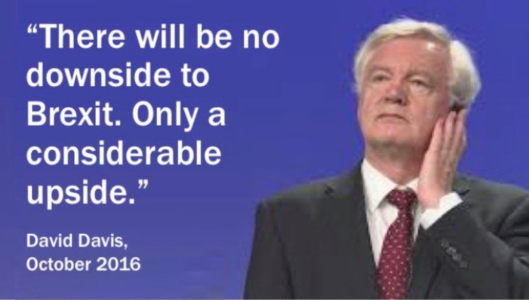 I don’t expect Airbus will be the last company to spell things out so starkly. Needless to say, the reaction of the Brexit fundamentalists has been complete denial. According to one on Twitter all we’ve got to do is ‘grow some balls’ (as opposed to them thinking with theirs) as apparently I’ve been ‘brainwashed’ by listening to experts!

Actually, this tweet sums up the reasons for the Brexit vote. It was the revenge of stupid people. But, because they’re stupid they’ve not had the brainpower to think the consequences through. It’s not the people they’re lashing out at who will be hurt the most, it’s them. The rich who funded and led the Leave campaign are already walking away to safety, carrying their Belizian diplomatic passports, or retiring to their villas in France or the Caribbean. Many others who have the option to leave will be doing so too as Brexit has created a poisoned country – as this tweet from Professor Tanja Bueltmann describes.

Who would have thought that a mature democracy could have been brought so low so quickly? We’re falling further into what’s looking more and more like a fascist state. I’ve always refrained from drawing parallels with Nazi Germany – until now, but now I think they’re too clear to ignore as the language is the same. A country where papers like the Mail can describe High Court judges as ‘traitors’, where MPs are afraid to vote with their conscience because of death threats and have to be escorted by SIX armed police. Where a Prime Minister can tell outright lies with a straight face on national TV (the Brexit ‘dividend’) is in deep, deep trouble. yet we seem to be sleepwalking over the edge of the cliff. Where’s the outrage at these things? Where’s the outcry? Where’s the push-back?This is how fascism takes over, when good people do nothing.

I fear for my country.