It’s a funny old world. Here I am, sitting on a train to London to join tens of thousands of other people who will be marching to protest about the shambles known as Brexit.

I thought my marching days were over. As a veteran of the Miners strike, CND protests, Poll Tax fracas and Gulf war demo (amongst others) I’d hoped we’d moved on as a country. How wrong can you be?

Our politicians have failed us, they’re incapable of publically admitting what a shambles Brexit is and the price the country will pay for it. Instead, some are outright lying about it. So, I find myself having to hit the streets of London once again. What a sorry state this country’s in.

What a fantastic day! I’ve a huge amount of pictures to share of this brilliant event, but here’s one of my early favourites. 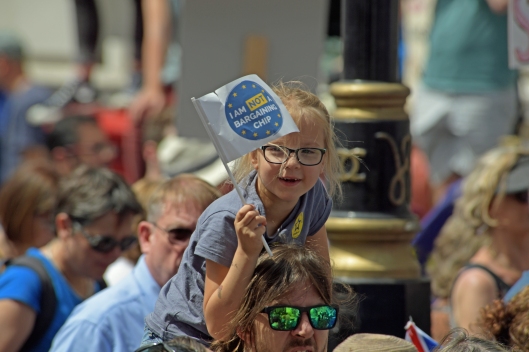 Getting back to Halifax after the march was fun due to delays on the East Coast Main Line thanks to a failed train near Peterborough. I ‘enjoyed’ an enforced stay in Doncaster, then our train was terminated at Wakefield and we were taken to Halifax by road. I finally got home at 02:15 this morning, but it was well worth it. I’ve added another couple of pictures from yesterday, but the rest (there’s around 60) can be found by following this link to a gallery on my Zenfolio website.