I’ve been scanning more old slides today. There’s an ecletic mix which includes royalty, personal shots going back 20 odd years, travel images and also railway shots. Two of the rail shots caught my eye as they sum up how much has changed since they were taken in 2001. Not just on the railways, but also across London. Neither of these shots are possible now.

Here’s the first example. A Waterloo to Paris Eurostar (set 3211) passes Vauxhall on the 25th January 2001 with the Houses of Parliament providing a historic backdrop. 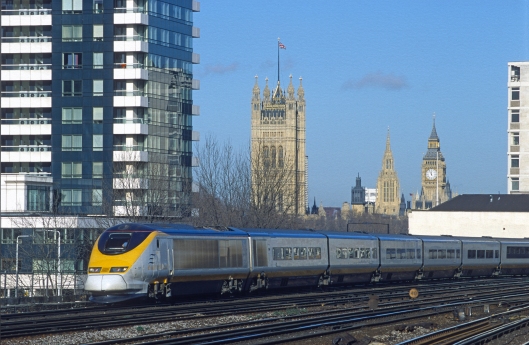 There’s two reasons why this is a historical shot nowadays, although only one is probably immediately obvious (to railway enthusiasts at least). In 2007 Eurostars stopped using Waterloo and the ‘classic’ line through South London because the service was transferred to St Pancras International. The second reason’s because new building has blocked off the view of Parliament. London’s booming housing market has meant that a row of apartments now occupy the land next to the railway.

Here’s another historic view from the same year, taken a month later on the 25th February 2001. One of the (then) brand new Gatwick Express units (460004) leaves London’s Victoria station with the 15:00 service to Gatwick Airport.

Both railway enthusiasts and London commuters will get this one but probably for different reasons. The Alstom built Class 460s are already history, having been withdrawn by 2012 to be converted into the Class 458/5’s. OK, the old slam door train behind it has gone too – but the biggest change in this scene is the iconic view of the old Battersea Power station. The area’s now part of a massive housing redevelopment which has hemmed in the power station and closed off the view.

I consider myself fortunate that I lived in London for so long and managed to capture shots like this. As the old Joni Mitchell song lyric says, ‘you don’t know what you’ve got till it’s gone’…