08:06.Mark and I are getting ready to set off from Exeter for another day’s judging. We’ve only two stations to visit but they’re spread out and we’ve also got to get home afterwards. Plus, the weather forecast suggests that today will be the hottest day of the year so far and several rail companies have already announced service cancellations and speed restrictions. Stay with me and see how we fare…08:47.We’re on our first train of the day, GWR’s 08:31 from Exeter to Barnstaple as far as Copplestone on the Tarka line which is made up of a pair of Class 150s. They were busy earlier as they worked Exeter to Exemouth beforehand, now it’s a bit overkill, but will probably be very busy on the way back. 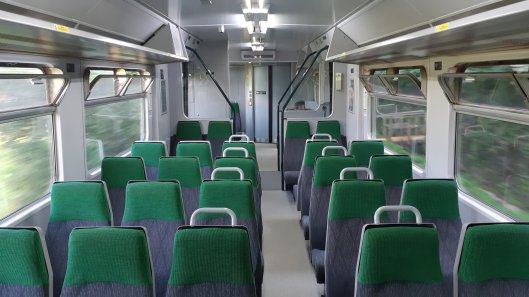 11:26.We’re now enjoying the air-conditioned comfort of a Hitachi class 800 en-route to Reading after visiting the single platform station at Copplestone and talking to the small band of women who’ve made it such an attractive station.

To say the weather’s hotting up is an understatement. We’re keeping one eye on Real-Time Trains, making sure the speed restrictions due to hot weather aren’t going to get in our way. At the moment a broken-down train outside Paddington’s actually done us a favour as it’s giving us a few more minutes to make a tight connection at Reading. That said, we’re now running late too!12:08.We made it! Our train was 5 late into Reading, but the one we were hoping to catch was 10 down. They arrived almost simultaneously at platforms 11 and 9 which meant a mad dash up the stairs to cross the tracks. We made it with seconds to spare. The pair of us are now sat in coach A of a 5-car 800.Now, I know it’s the hottest day of the year and all that, but even so – I’m surprised at how steamy it’s been on both the 800s we’ve travelled on today. I walked through both sets just to check and some of them were like saunas. The car we’re in at the moment is the only one at levels I’d say are actually cool. It’s disappointing for brand-new trains.That said, it’s not a bad environment. Most folk bailed out at Oxford which allowed the pair of us to purloin a table and stretch out in comfort to enjoy the trip to our next destination: Evesham, where we’ll now arrive an hour earlier than planned – no mean feat on a day like today!16:02.It’s been an eventful few hours! After being on a cool train for a couple of hours the heat really hit us at Evesham. Having done what we came to there was just enough time for a celebratory pint before we started to make our way home via Worcester. This is when things started to go a bit “Pete Tong”! Our West Midlands trains service to Birmingham was stuck behind another DMU in platform 2 which had overheated. A shunt move and reversal got it out of trouble and into platform 1 where it picked us up before leaving 20 mins late. All was fine until we hit the outskirts of Birmingham where we got caught up in signal failures and more overheating trains. Mark decided to change at Smethwick Galton Bridge and try for a train to Cheshire. I opted to head into Birmingham, get a few pictures then weigh up my options. If the West Coast was up the spout I can always head back via Derby…Ironically, the train that carried us from Worcester was an old friend. It was one of the ex- London Overground Class 172s used on my old stamping ground – the Gospel Oak – Barking line, although they look a little different nowadays!

Talk about serendipity! Here I am, sitting in central Birmingham, considering my options when I get a phone call about a commission from someone who’s having to get driven back to London from Derby ‘cos the Midland Main Line’s in chaos! Well, that’s me going via Derby ruled out then!

The weather’s starting to cool a bit here so I might just wait for the rush to subside for the next hour before I look at getting home. I’m used to packed trains but packed into a hot and sweaty Voyager for 90 mins isn’t my idea of fun if it can be avoided…

After getting a few photos at Birmingham and having let some of the rush crush subside I decided to begin heading North and the first opportunity was a Class 350 working an all stopper shuttle to Wolverhampton. Needless to say, it was packed, but the air-conditioning worked and it wasn’t that far to stand. The Conductor was excellent as he stayed away from the script and came across as human and just trying to do his best in trying circumstances.

A few minutes down the line and out of the blue I got a tap on the shoulder from a chap in Virgin trains uniform who was ‘on the cushions’, well as much as you can be stood in a vestibule – who said “I follow you on Twitter, we have a mutual (rail) friend”.

We ended up having a really good natter about the railways and today’s events.

“Penny the Pendolino” (for it was she) arrived at Crewe 90 mins late. Also late was a Transport for Wales service to Manchester Piccadilly, which I managed to jump on a couple of minutes before it left. Like most trains I’ve been on today, it’s packed – but it’s getting me closer to home…

I’m on the final leg now. The TfW train to Manchester was fine. What wasn’t was looking at some of the utter crap people have been posting on social media about railways and the hot weather. Anyone would think the #RailwayFamily were deliberately trying to ruin peoples day just for the shots and giggles rather than trying to keep them safe and get them home, whilst suffering stress themselves. My opinions of my fellow country-folk continue to decline. At what point did we become so stupid that we almost revel in the fact – and also so intolerant?

Having arrived in Manchester I made my way on foot between Picc and Vic. The wind got up and we actually had a few blessed drops of rain that teased but little else. Now I’m on the (slightly) late running 20:58 to Leeds, a Class 156/153 lash-up using a former GWR “dogbox” (railway slang for a single car Class 153) which I’m relaxing in as the train’s pretty empty. Hot, but empty!