I’ve not blogged about Hs2 or what passes for a campaign against it for a while now, mainly because there’s nothing going on! Oh, there’s still a tiny bunch of Nimbys (nor more than a couple of dozen regulars) banging on about Hs2 on Twitter, but in the real worlds there’s nothing. In an effort to still appear relevant, StopHs2’s Joe Rukin turned up outside a couple of Tory party leadership hustings but he got nowhere near either of the events in Carlisle of Nottingham. Instead he filmed himself rambling on (as he does) about nothing really relevant to anything. Neither video got more than a 2,000 views, so it was all pretty pointless, as usual. If you like watching paint dry, you can find one of the video’s here.

Meanwhile, Rukin’s latest petition on the Government website has bombed. Each one he starts performs worse than the last one. This one’s struggling to get 19,000 signatures. To be in with a chance it needed to have over 53,500 signatures at this stage of the game. When you look at the constituency results, they’re awful. Camden is supposedly a StopHs2 stronghold as it contains Euston, yet only 247 in Camden have signed, and the last one of those was 5 weeks ago! Truth is, the anti Hs2 campaign in Camden has collapsed as most of those genuinely affected have been bought out by Hs2 or have moved on. It’s the same in many other areas. Let’s take the Chesham and Amersham constituency of arch Hs2 anti Cheryl Gillan MP as an example. This has always been ‘the’ anti Hs2 stronghold, so you’d expect tens of thousands of signatures, wouldn’t you? Here’s the reality, I took this screen-grab a few minutes ago. 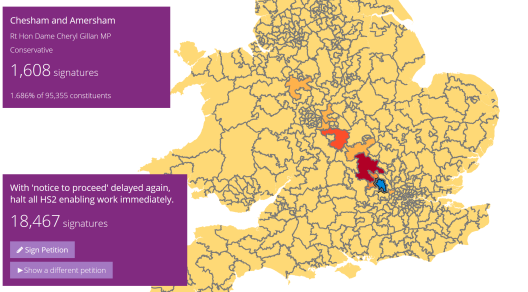 A grand total of 1608 signatures, not even 2% of her constituents! Some ‘stronghold’! And this is their best result. Notice also that the only constituencies with anything more than a a handful of signatures are those on the Hs2 route? So much for claims that Hs2 antis aren’t really Nimbys!

Another sign of the collapse of their campaign is the results from the only London constituency that registers, Ruislip, Northwood and Pinner. In the last petition they managed 1555 signatures, or 1.59% of constituents. How many have they got so far this time? Just 389 or 0.399%!

Another interesting feature of the latest petition is the way nowhere on the Phase 2b route to Leeds even registers. The Manchester leg doesn’t even register at all. On the Phase 2a route to Crewe the only one that appears is Stone (with just 287 signatures, 0.335%). The petition’s closing date is 29th October. When it finally staggers to a close I’ll crunch the constituency numbers and compare them with the last two petitions just so we can map the decline. To put their numbers in perspective, remember that Hs2 passes through 63 constituencies that (between them) contain a total of 6.53 million people!

All the evidence points to the fact their campaign’s going backwards, not forwards. More and more folk affected by Hs2 have been bought out and no longer care about the campaign to stop Hs2 and that process continues across all phases.

So, where do they go from here? Nowhere. The grassroots Stophs2 campaign’s effectively dead. Their only hope is that the cavalry (in the shape of a new Tory leader) will ride to their rescue. But, as I’ve blogged previously, that isn’t going to happen. It’s all over bar the moaning now as Hs2 ramps up to the major construction phase later this year. No doubt we’ll still see the usual suspects wittering on about Hs2 on social media for a while yet, and there’s no sign of Joe Rukin being employable, so expect a few more pointless videos as he tries to keep himself in the public eye. But as for any effective campaign, the show is well and truly over!

1 thought on “StopHs2, remember them?”