07:29.It’s a beautiful morning in the Calder Valley today, full of sunshine and feeling like summer, but I’m already Westward bound on the 07:21 to Chester as far as Manchester. Unlike earlier in the week when this was a rammed 2 car Pacer, today it’s a 3 car Class 150+153 lash-up so there was no problem getting a seat and no-one’s been left behind anywhere.Whilst I was waiting at Sowerby Bridge a unique service passed in the opposite direction. Grand Central work an early morning service from Hebden Bridge to Leeds on behalf of Northern Rail. This calls at Sowerby at 07:17. 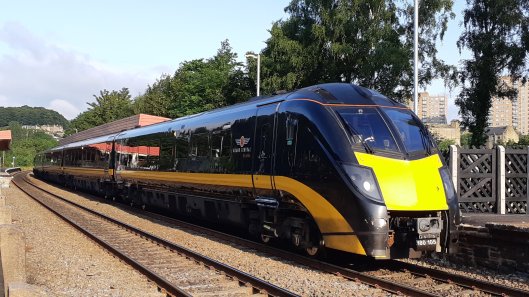 I’ve always wanted to get a shot of this but didn’t fancy wandering down to Sowerby Bridge at 7am unless I really had to!

We’ve just left Todmorden and summer’s drawing to a close in front of me. There’s some humongous grey clouds towering on the horizon and it’s looking like once we pass through Summit tunnel into Lancashire the weather’s going to be a bit wet! Fortunately I’ve a folding umbrella on the camera bag but the conditions might make today’s shoot ‘interesting’ to say the least. PR shots and rain are uneasy bedfellows…I’m off to the Alstom factory in Widnes to shoot pictures of one of Transport for Wales repainted and refurbished Class 175s. I’m not sure if I’ll be allowed to share any pictures just yet, so watch this space…

There’s fun and games at Manchester Victoria (where we arrived 5 mins late due to congestion) as a points failure at Earlstown’s having a knock-on effect. I’m now on TPE’s 08:10 to Manchester Airport which I’m taking as far as Oxford Rd. I’d normally walk but those grey clouds I mentioned earlier a currently dumping their load on the city! A sign of how much Victoria has changed in recent years was the fact that as my TPE service pulled in, all four through platforms were then in use by the TOC. It’s a far cry from just a few years ago when Northern had the monopoly on services through Manchester’s second station.

I’m on my 3rd train company of the day as I’m now on an East Midlands Trains service from Nottingham to Liverpool Lime St as far as Widnes.

The rain’s stopped for now but the threatening, low clouds hold the promise of more at any moment. There’s just the occaissional tantalising glimpse of blue sky and sudden shaft of sunlight to tease me.

I’m still at Alstom in Widnes. After completing a whole series of internal and external shots we’ve taken a coffee break in the hope the weather might change just enough to get a sunny external shot. After that I’ll be calling it a day. The guys need to finish working on the train at it needs to head back to Chester tonight. The bodywork looks really good as thus is a proper paint job, not just a vinyl wrap.

Now I’m heading into Liverpool to grab a late lunch (and a few more pictures) before heading back across the Pennines.

On the way in we’ve just passed Allerton depot. Talk about changing fortunes! For many years the depot was derelict. Then Northern took it over as a base for the Ex-Thameslink Class 319 electric fleet which were displacing diesels. Now the depot is full of Northern’s next generation of trains, the CAF built 195 and 331s. The picture was the same at Edge Hill carriage sidings. There’s literally dozens of new Northern trains ready to enter service over the next few months as mileage accumulation and driver training is complete.

My, Liverpool Lime St’s changed in just a few short weeks! Not only are Class 195s much in evidence, so are some other interlopers in the shape of Transport for Wales who’re operating a new service to Chester. Here’s a couple of images.

Understandably, there are still teething problems with the new Northern sets. Two were being coupled together when something ‘fell off’. After a bit of head scratching and investigation staff on the scene told me it turned out to be nothing more serious than a spanner someone had left where they shouldn’t have! It caused a minor delay.

After heading back into and across Manchester the same way I came I’m now on Northern’s 18:21 from Manchester Victoria to Sowerby Bridge. As it’s a 3-car and today is ‘POETS day’ (Piss-Off Early, Tomorrow’s Saturday) my trains neither crowded nor the passengers stressed. That said, I feel sympathy for train crew working this evening as many stations are awash with folk on their way out and expecting to have a good time, as the amount of empty bottles & cans they’ve left behind attest to!