Morning folks! At 03:30 our train sprung to life. People are waking up and springing into action as we’re on the move, heading back to Bangor to rendezvous with the walkers who are being bussed back from Snowdon.Dawn’s just breaking and the weather’s improved. There’s been no rain since we left Crewe yesterday, although as we head East the cloud is getting thicker and darker. Let’s see what the day brings…

The train’s arrived at Bangor. Now we await the walkers, who should arrive in the next few minutes.04:42.All the climbers are back, on the train and we’re ready to leave. Due to the conditions it was a very tough climb and descent. A few folk are already limping, so I expect our on-board doctor and the two sports therapists will be busy for the next few hours.Whilst the weary walkers strip of their wet kit and relax, the volunteers are busy serving tea and coffee. Virgin chef, Ian Joesbury, who’s worked on every single one of these trains is preparing a cooked breakfast.

The train’s approaching Chester and the two catering cars are a hive of activity as breakfast’s being cooked and 200 rounds of bread are being buttered to make sandwiches for packed lunches. It’s a production line where everyone knows their job. Here’s Molly laying out the breakfast platter, ready to be served.

Meanwhile, in the climbers coaches, people try to rest and get some sleep.

We’re just approaching Preston, most people (apart from the train crew) are asleep or dozing. The weather’s taken a turn for the worse. It’s dark, wet and misty with visibility down to a few hundred metres. This time of morning the station’s almost deserted but we’ve stopped to drop off some rubbish and pick up a few more supplies.

Breakfast is being served in the front three coaches. Meanwhile, climbers are still resting or getting ready in the back three.

The train’s a hive of activity as everyone gets ready to hike. The weather’s broken and we’ve actually got patches of blue sky and broken cloud!

We’ve swapped our mainline train for the narrow gauge ‘lil ratty’ to carry us from Ravenglass to Eskdale. We seem to have a rather unusual driver…

The teams are long gone from Dalegarth now and many have already started climbing Scafell. This year my job’s been different. We’ve had the potential to get some national newspaper coverage so my role was to get shots of the teams starting off, then hot-foot it back to the railway station café to use the wifi and get shots out to our PR people. I’ll catch up with everyone else later.

I don’t know what the weather’s like at the top of Scafell, but it’s bright and sunny where I am right now! Pictures emailed, I’m just waiting for my lift back to join the others at Scafell.

It’s been a very long day with little chance to blog as we’ve spent most of the day in areas with no mobile phone coverage, never mind wifi access!

We’re now on the train on our way to the final mountain (Ben Nevis). Right now we’re at Carlisle whilst there’s a crew change on the train. The onboard crew served a fantastic two course meal to the weary climbers, many of whom have already hit the sack as we have a 4am start tomorrow. Here’s our train arriving at Ravenglass to pick us up after being serviced at Barrow. 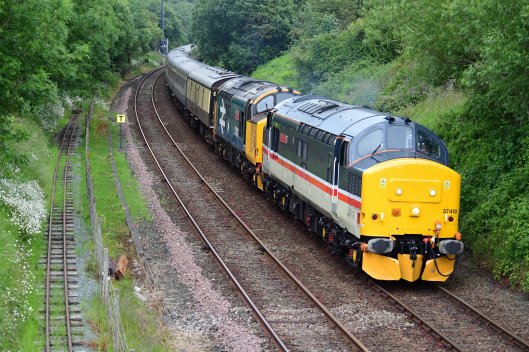 We’re currently being held at Lockerbie and it’s time for me to call it a day. As usual, it’s been a brilliant one, even if slogging up fells with a 10kg camera bag (never mind all the other kit) is a young man’s game. I’ve really enjoyed the experience and will share more photos just as soon as I can. Stay tuned for day 3…