The weather here in the Calder Valley’s been awful today. We’ve had that fine drizzle that permeates everything most of the morning. I’ve been busy at home trying to catch up on a bit of work before heading out shortly to join the Railway Children’s annual ‘3 Peaks by rail’ madness. Stay tuned and I’ll try and blog through the day…

I’m finally on my way after a bit of a stressful few hours trying to get everything I needed to do done before I left home. I’m now on the 15:22 from Sowerby Bridge heading for Manchester then Crewe where the train starts from this evening. I’m not alone. There’ll be people from all over the country making a beeline for the town as the various teams meet up. A number of volunteers are already on the train as the stock is being used for a tour by the Branchline society. This will raise even more money for the Railway Children, adding to what the 3 Peaks teams will gather.Sadly the weather’s not looking great. On the bright side, the flooding that closed the line between Crewe and Chester has abated and the line’s reopened, so we’re good to go!

Because of the amount of kit I need for this event, I’m using wheels instead of legs. I’ll need to save those for later!

Deep joy! At Manchester Piccadilly I found that the Transport for Wales 16:31 service to Crew is worked by a 2-car Class 150! The Conductor was very apologetic that “this throwback to the Thatcher era” (his words) was the only unit available! It’s cosy. Very cosy. But at least there’s a catering trolley- if you can fight your way through to it… 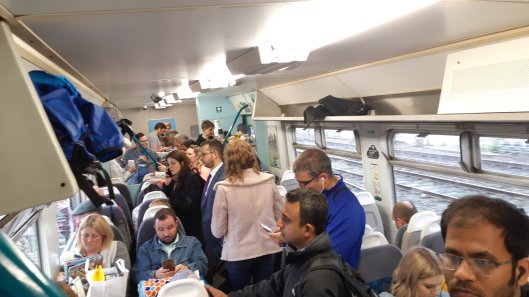 The teams are here and having equipment checks. There’s plenty of time to meet and greet or take pictures.

Due to technical issues with the stock and need to refuel the generator car at Gresty Bridge we were a few minutes late leaving Crewe, but it’s no real problem. We’re now bowling along the North Wales coast at 90mph as the first meal is being served.

The logistics of this trip are quite something. During the event the volunteers will wash 4,600 items of cutlery and crockery. 1,140 pieces of fruit and cereal bars will be distributed along with 200 rounds of sandwiches and 380 servings of fruit juice. 200 bacon rolls will also be served. Everyone will get a full English breakfast, a two course evening meal and a three course lunch.

At 21:33 we reached Bangor in North Wales and the teams transferred to road coaches for the last leg to Snowdon. As soon as they were gone the train moved off and headed to Holyhead where the locomotive can run round the train. The volunteers remaining on the train weren’t idle. They were busy collecting plates and cutlery, picking up all the rubbish, disinfecting and cleaning the toilets, making sure the train was fit to pick up the weary hikers in the small hours. 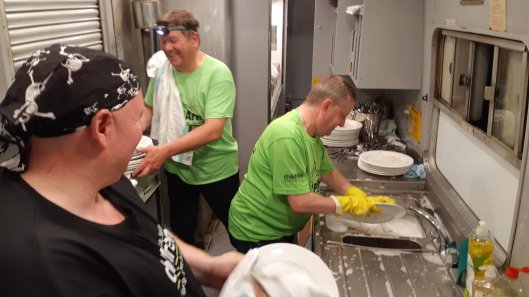 The kitchen wasn’t idle either. Fresh food was being prepared for the volunteers. Ian and his crew were preparing home-made pizza’s for everyone.

Having offloaded all the rubbish in the platform and with the engine having run round, the train’s been shunted into the sidings where it will wait to return to Bangor.

Having swapped a few stories and jokes over food, the volunteers are all bedding down for the night on the train. All the coaches bar one are dark as the lights have been turned off to conserve the batteries.We start moving at 03:52 when we head back to Bangor to await the walkers. I’m hitting the sack too as it’s chance to catch a few hours undisturbed sleep. Part 2 of this blog will start early in the morning. G’night!