After working until late last night scanning slides I’ve restricted myself to working from home. Mind you, the weather’s not exactly been conducive to wandering the country. It’s been cold despite the sun and with moody skies that have threatened rain, sleet or even snow.

I’m now on the final few slides of the latest album to be disposed of, and it’s only taken 20 years to get them all done! In the past I’d only scanned a selection of images from each album. Now I’m scanning the whole of the album that I’ve decided to keep (some no longer make the grade) and I’m freeing up a lot of space in the process.

Here’s a couple of samples from the latest batch which show just how much has changed in the past 20 years.

On the 8th June 1999, unit L702, made up of Class 1777 DMU cars 51356. 51398 work the 15.38 Barking to Gospel Oak past Harringay Park Junction on the ‘Goblin’, as the Gospel Oak – Barking line is known. At the time this was one of my local railways as I only lived a quarter of a mile away. It was one of London’s ‘cinderella’ railways, and a real backwater. A pocket of diesel operation that was surrounded by electrified lines that was still controlled in places by semaphore signals. The Class 117s themselves were old and unreliable and the service was often appalling. If you visit this same location today you wouldn’t recognise it. Everything has changed. The DMUs are gone, as is the signalbox and semaphore signals. The junction has all been relaid and even the roadbridge beyond has been rebuilt. The line’s also been electrified and this view has disappeared behind overhead wires. 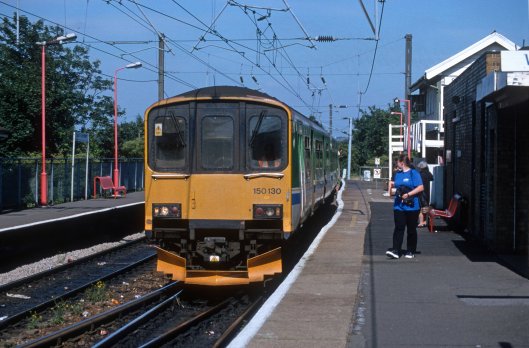 Here’s South Tottenham station just 17 days after the last picture was taken. The first Class 150s have been cascaded to the ‘Goblin’ to take over from the elderly Class 117s. A slightly care-worn 150130, still bearing Central Trains livery, calls at the station whilst working the 16.08 Barking to Gospel Oak service. In 2010 the 150s were displaced by the Class 172s which have lasted until now due to delays in electrifying the route and the new Class 710 trains being over a year late into service. Ironically, 150130 has followed me North. After being transferred to First Great Western after it left North London it’s now part of the Northern Rail fleet!

Another 70 plus old slides have been added to my Zenfolio website. If you follow this link, you can find which galleries they’ve been added to. There’s everything from trains to stations.