I’ve finally got time to put keyboard to screen and compose a short blog as I’ve been working from home again which has been quite productive but I’ve also been trying to keep a wary eye on the political scene which gets more and more bizarre. Predictably, the right-wing newspapers piled into John Bercow (the speaker of the House of Commons) like a rugby tackle. The hypocrisy was stunning. Here’s the panoply of papers who support Brexit because it’s ‘taking back control’ (read stopping tax investigations) from Brussels and restoring the Sovereignty of Parliament – apart from when it’s the wrong kind of sovereignty, obviously – and the Speaker puts Parliament before a government that’s desperate to deliver what those newspaper tycoons really want: Brexit! So he’s fair game!

Meanwhile, in Yorkshire, the ‘March to Leave’ staggers on and provides all of us with a good laugh. Certain media pundits & politicians love to say that, unless Brexit is delivered, there’ll be rioting in the streets so we’d better forget democracy and cave into their threats. The ‘march to leave’ has proved just how toothless a threat we really face. The best they’ve managed to muster is around 60 people alternately walking/being bussed aimlessly across the country whilst the rest of us look on and say “Oh, please?” This isn’t exactly a Nurnberg rally, or the Poll Tax riot, or the 1st Gulf War demonstration (I was on the last two, so know) it’s more like a Derby & Joan club ramble with 60 people and vaguely political overtones – and none of the ‘stars’ of the show like Farage, Kate Hoey or Andrea Jenkyns have shown up since the photo-call on day 1!

Meanwhile, I’ve been busy catching up on paperwork, photo editing and scanning. Ironically, the pictures I’ve been sorting out today are from the areas that ‘march to leave’ have passed through. Here’s a sample – including a before and after just for perspective. This is Thornaby locomotive depot outside Middlesbrough, back in March 1997. 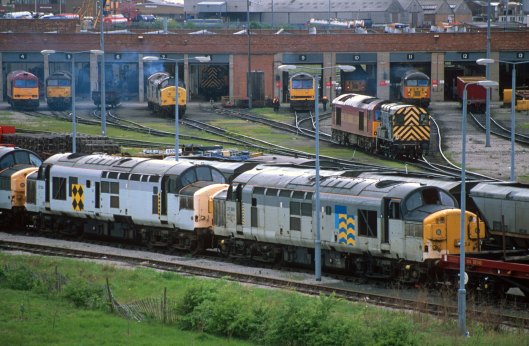 The world had moved on. The railways had ditched a lot of their old British Railways designed locomotives for modern ones which were more reliable and needed less maintenance. At the same time the importance of Tees-side had changed as many heavy industries had closed – as well as the pits that once supplied the coal that kept the power stations and blast furnaces going.

Quite how the Brexiters marching through here are meant to turn the clock back and re-invent all this purely through us leaving the EU is one of those mysteries I’ve never been able to work out. But then, neither have they. All they have is a nostalgia for the past without the slightest idea of how to make it reality. Still, Unicorns, eh?