I’m currently continuing the marathon of scanning all my old rail and travel slides, which has led me up to memories of March 1997, 22 years ago…

Back then I was still living and working in London. Lynn and I had moved from Bromley-by-Bow in the East to a new home in Crouch End in North London, but I still commuted daily to Bow as I remained working in social housing in those days. Rather than use public transport I’d cycle as it was quicker, cheaper and healthier. Having my bike at work meant that it was easy for me to pop down the road from Bow to Stratford at lunchtimes and get some pictures at the station. I was keen to do this as we were leaving the country for 18 months later that year and I knew so much would have changed when we got back (as it had when I left the UK between 1991 – 1992). Here’s a few pictures from those lunchtime sessions. One of the great beauties of Stratford (apart from the fact it was always busy) was that you never quite knew what would turn up! 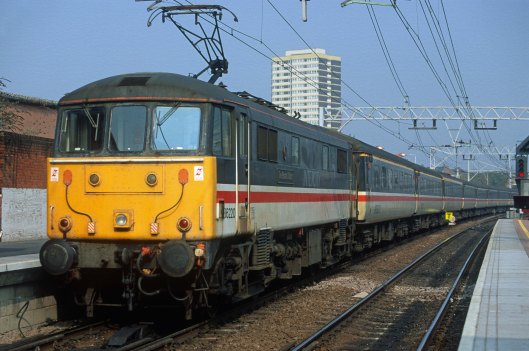 Here’s class 86 no 86220 passing through Stratford with the 13.30 Liverpool St – Norwich on the 12th March 1997. 15 of these former West Coast workhorses had been transferred to the Anglia region when the line to Norwich was electrified in 1986. 86220 remained in service until 2002 when it was withdrawn due to a transformer failure. The rest remained in use hauling passenger trains on Anglia until 2005. 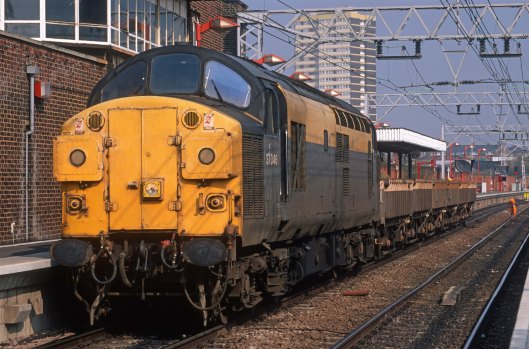 On the same day EW&S operated ‘split box’ 37046 hauled a short civil engineers train through the station, heading for the North London line. These locomotives has a long association with the area, with many based at the old Stratford shed.  They still pop up today, 60 years after they first entered service. This particular loco was transferred to Europe for a few years to work on contracts building high speed lines in France. It returned to the UK in 2007 and was scrapped by CF Booth Rotherham in 2009.

I popped back to Stratford on the 17th March when I snapped this unlikely combination. 315803 leads 365534 through the station en-route to the depot at Ilford. The BR built 315s were used on the Liverpool St – Shenfield services and are only just being replaced by the new Bombardier built Class 345s now. The 100mph Class 365s were the last BR built EMUs, having been constructed in 1994-95. The first 16 of the 41 strong fleet were used on the Southern region whilst the remaining 25 were used on services out of Kings Cross to Peterborough, Cambridge and Kings Lynn.

EW&S operated 90138 heads for the North London line with a train of cars and vans from the docks at Dagenham or Tilbury. Stratford was and still is an important freight route, funnelling traffic from the Eastern ports through to the North and West. 90138 was eventually given its old number of 90038 back. It’s been stored unserviceable at Crewe since July 2005 and faces an uncertain future. To the right of the picture is my trusty bike, which I still use today!

I was back to Stratford on the 21st March. Engineers trains often produced oddities such as this. 47702 has fallen on hard times. This former passenger locomotive was built in 1966, originally for BR’s London Midland region before being transferred to the Western region. In 1979 it was converted to ‘push-pull’ operation and worked high-speed (well, for then) services between Edinburgh and Glasgow. In 1990 it moved back down to the Western, working Thames valley services before they went over to DMU operation in 1992. It then ended up working Network SouthEast trains out of Waterloo before being transferred to Stratford in 1993. After being downgraded to a freight pool it was part of the fleet purchased by EW&S. In the picture it still carries the cast depot plate depicting the Stratford shed symbol of the ‘cockney sparrow’ although it was allocated to Toton by now! Whilst in Scotland it was named “St Cuthbert” but in this picture it carries the “County of Suffolk” nameplates previously worn by 47584. After a long and varied career the loco was stored at Toton in 2000 and used a source of spare before finally being cut up in January 2005.

1 thought on “Down memory lane: Stratford lunchtimes in 1997”