Having survived this morning’s battering from storm ‘Eric’ (No, really, that’s what I told it was named!) I’m on the rails again today as I’m off to Chester to meet up for a meal and some drinks with many of the other folk who volunteer to run the Railway Children’s annual 3 peaks by rail event. We’re always so busy over the 3 days we don’t normally get chance, so – as there’s no train to run…

Despite the fact today’s Northern Rail strike was called off earlier in the week it’s not proved possible to reinstate a normal timetable, which has meant no Calder Valley services today. Instead Dawn was good enough to take time out and give me a lift to Huddersfield where I could catch Trans-Pennine Express service instead. I’m now aboard the 13:08, heading for Manchester – and it’s actually running to time!

Huddersfield station was rammed, I can only assume the local footy team are at home today. I still can’t get used to the sight of 100mph TPE Class 185s sitting in the platform used by Northern’s Manchester shuttles now that they’ve taken over most of the services. It’s lovely having a 185 instead of a 150, but I can’t help feeling it’s a mis-match of resources.

This is my first trip across the Colne Valley route since returning from New Zealand. It’s interesting to see the precursors to the forthcoming route modernisation and electrification. Lineside vegetation received quite a prune last year, now new cable troughing is appearing – much of it elevated. I suspect I might be kept quite busy documenting the changes to the route over the next few years…

Meanwhile, on board my train is as busy as ever. Lots of folk are heading to Manchester for the weekend, including a couple of Geordie lasses sat opposite – one of whom has has had quite a bit of ‘work’ done. Blonde hair extensions? Check. ‘Trout pout? Check. Boob job displayed by a low top? Check. Trump ‘tan? Check. I’m sure they’ll have a wonderful time in the city!

Their replacement at Manchester Victoria was a portly middle-aged man carrying a plastic bag full of beercans but no sense of personal space or spatial awareness. He immediately spotted a lone woman in the vestibule whom he buttonholed, pouring out a life-story that included divorce, the inability to hold down a job and a persecution complex that includes the courts and the DWP. Luckily for her, he got off at the next stop, Oxford Rd. So did I as I’m changing the TfW’s 13:56 to Llandundo.

Despite the fact it’s a 3-car, it’s another busy train. There’s a few empty seats but some people, including myself, opt to stand. My excuse is that people-watching is more fun that way!

We’re just leaving Warrington Bank Quay where half the folk in my coach retrained, only to be replaced by an equal number of new folks. As we pulled away I was surprised to see a Colas liveried Class 60 (002) on a rake of Drax power station biomass hoppers. Isn’t that a GBRf operated service? Thanks to the power of social media I’ve now found out Colas flogged this loco to GBRf last year. I clearly don’t pay enough attention to fleet news these days!

I’m now ensconced in Chester – and it’s packed! The station was busy enough, it’s on odd melange of old and new that doesn’t quite work due to the piecemeal nature of the improvements carried out over different decades. My personal belief is it needs a master plan redevelopment to turn it back into the gateway to the city it once was – and fix that leaky roof! Notice the mats and cones everywhere? 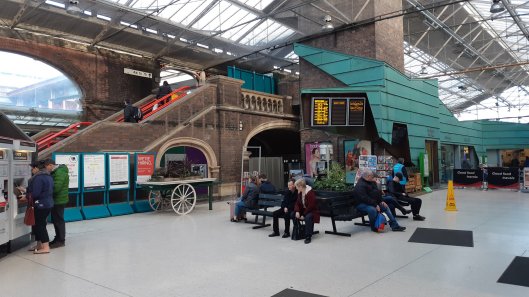 My hotel was only a few minutes walk away, which will be handy for tomorrow. It’s cheap and cheerful and in the throes of a refurbishment in the hands of new owners – which could account for the cheap!

As I wandered further into the city it was full of Saturday shoppers, gawkers and ordinary tourists. Here’s the view from the old city walls. 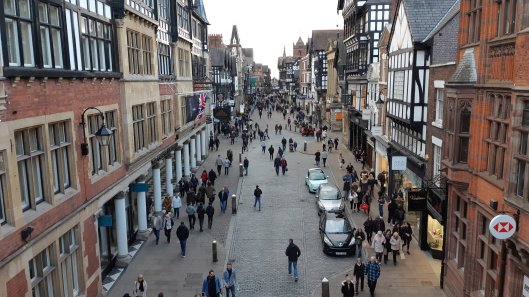 Despite the crowds it’s good to be back. I’ve fond memories of Chester stretching right back to the 1970s. I’d also forgotten what an interesting town it is due to the mix of architecture. Hopefully, tomorrows weather will permit me to get some pictures. In the meantime, here’s a couple of tasters.

Here’s some of our merry band dining at the Botanist in the city centre.

Finally, after a very convivial evening, I managed to get a shot of the group before we headed off to our respective abodes.