It’s been one of those slow days where we’ve been pottering around but doing nothing special – partly due to the miserable weather but also due to recovering from yesterday’s entertainments! I shouldn’t really complain about the weather. Whilst grey skies and showers aren’t to everyone’s taste, drinking water is – and our reservoirs are perilously low this year after such a long, dry summer.

Most of our day’s been taken up with the mundane, the sort of everyday chores that fill up a lot of modern day life. Trips to the recycling centre and a local farm shop then braving packed supermarkets (honestly, you’d think people were preparing for the Zombie apocalypse or world war 3, not just Christmas) and finally, giving in and nipping up to one of our favourite local pubs (The Moorcock Inn) for a ‘swifty’ and a chat before a quiet night at home. Whilst Dawn’s busy cooking pan fried hake with sautéed potatoes and steamed broccoli I’ve retreated to the office to scan a few more old slides. Here’s a couple of samples. 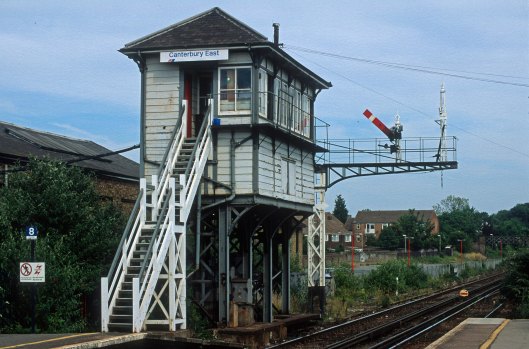 Here’s Canterbury East signalbox on the 21st July 1996. Built in 1911 by the South Easter and Chatham Railway it’s now a grade 2 listed building. It’s elevated so that the signalman could see all the tracks beyond the station roof.

On the 2nd August 1996 Class 47 No 47725 sits in platform 1 of London Kings Cross with the stock of an afternoon mail train whilst an electric loco at the front prepares to take this service North to Newcastle at 16:30. Mail trains used to operate out of many of London’s termini until a new rail connected mail centre (the Princess Royal Distribution Centre, or PRDC) opened at Willesden in 2003. In those days these trains would block platforms for hours, nowadays you’d never get away with it as platform space is at a premium.

Right, I’ve been summoned as food’s ready. Now for a glass of wine and a film…