It’s a miserable afternoon here in the Pennines, for most of the day it’s been impossible to see across the valley due to the mist and murk, so I’ve been busy writing and catching up scanning more old rail pictures, this time from Sunday 21st April 1996, which was a bright sunny day in London. Engineering work Between Latchmere Junction and Kensington Olympia had closed the line, which meant that Eurostar trains running from their Depot at North Pole into Waterloo International had to be diverted via Kew East Junction and Clapham Junction. This involved hauling them with pairs of Class 37 diesel engines and translator vehicles as far as Clapham Junction, where the Eurostars could pick up the 3rd rail and proceed under their own power.

This was such an unusual sight that I spent a few hours at Clapham recording the process. I’m glad that I did as now – 22 years later – it’s not something you’ll ever see again. You can find the bulk of the pictures in the Eurostar gallery on my Zenfolio website, but I wanted to flesh out the details in a blog.

Two hired-in Class 37s, 37074 in Mainline Livery and 37185 “Lea and Perrins” in Civil Engineers ‘Dutch’ livery  stand in platform 4 at Clapham Junction, attached to Eurostar set 3223/3224 by translator cars that have couplings and air hoses that are compatible to both. The 37s have hauled the set from North Pole depot but will leave it here to run into the carriage sidings, ready to return to North Pole with another Eurostar. The company had its own fleet of Class 37s (37601-612) which had been rebuilt to haul the cancelled ‘Nightstar’ trains and also provide assistance like this. I’ve no idea why these two were hired-in,  but they made a colourful sight! 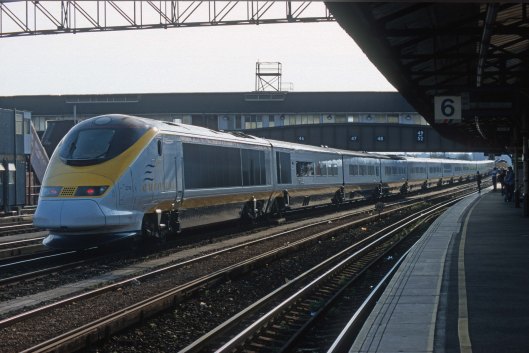 Eurostar set 3216/3215 stabled in the carriage sidings at Clapham Junction. It certainly made a change from the usual slam-door stock.

Staff uncouple the Class 37s from 3223. Note the protective shield placed over the live 3rd rail to allow the crew to get between the two vehicles safely.

The 37s have moved off, the nose doors are shut, and 3223 prepares to head off under its own power to Waterloo International.

Away we go! with 3223 leading and 3224 trailing, the set heads for Waterloo International. 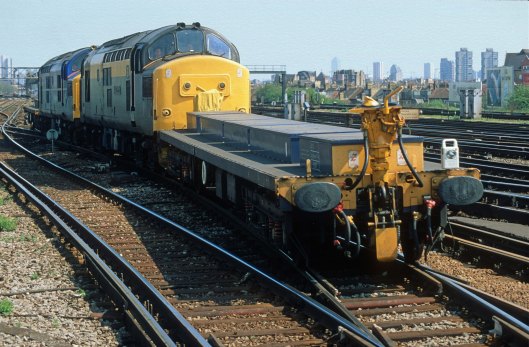 Job done, 37185 and 37074 move into the carriage sidings to wait their next turn, with barrier vehicles at either end. 10 of these were converted from old parcels vans by removing the bodies and adding weights and  compatible couplings.