I’m taking a break from working from home to base myself at ACoRP’s water tower office at Huddersfield station today as I’m being interviewed about my ‘Cycle India’ trip for their e-magazine ‘Train Online’, which will be appearing shortly.

Not bad for an office, is it?

It’s good to be able to stretch my (metaphorical) legs as the bad weather has left me a little ‘stir crazy’. My Indian adventure already feels like a dream, despite it only being a couple of weeks ago. At least the snow’s melting and the thermometer’s reaching a balmy 5 degrees today!

Sadly, there’s little of interest to photograph at the nearby station. The Colne valley route sees hardly any daytime freight traffic nowadays, partly due to the intensity of passenger services but also because most traffic has vanished. The ‘binliner’ services from Manchester which were the backbone of daytime freight traffic have ceased to run and the replacement service from Knowsley (Liverpool) to Wilton traverses the Calder Valley instead. The only regular service, the afternoon Leeds Hunslet to Tunstead cement tanks runs ‘as required’ on a Thursday – which means it’s unpredictable.

On the 18th January this year, Freightliner’s 66620 heads West through Huddersfield with the only regular daytime freight service through the town, the Hunslet (Leeds) to Tunstead empty cement tanks.

Whilst there’s little freight, there’s a regular diet of Transpennine Express Class 185s shuttling across the Pennines, plus Northern 142s, 144s, 150s, 153s, 155s and 158s (and the occasional 156) pootling to and from Manchester, Leeds, Sheffield and Wakefield. A few Manchester services are extended to ‘exotic’ destinations farther afield such as Wigan and Southport, whilst one evening service via the Penistone line to Sheffield pitches up at Retford (of all places).

Soon to be heading for the scrapyard, a Northern Class 142 ‘Pacer’ leaves Huddersfield for Wakefield on the 20th June 2012

The railscene at Huddersfield will be considerably enlivened later this year when TPE start running Class 68’s hauling new Mk5 coaches built by CAF in Spain, adding yet another chapter to Yorkshire’s railways. Electrification of the route is due to begin in 2019 which will have a massive impact on the local network, so there’s lots to look forward to (and document) over the next few years.

Basing myself in a large town like Huddersfield’s a bit of a luxury for me when I’m ‘office based’ as it gives me the opportunity to nip out at lunchtime and shop without travelling far. As this is a busy university town there’s a better selection of shops than in humdrum Halifax. It also alters the demographic because there’s far more younger faces around during the day. I nipped out earlier to visit the indoor Queensgate market. I love the variety of Northern markets. Queensgate is a modern example, opened in 1970 it was built with a bespoke roof system of 21 asymmetric curved shells. The design allows maximum light into the market and it’s considered to be the best example still standing of a retail market from the 1960s-70s. Grade 2 listed, it’s a interesting mix of traditional and modern. Fruit and veg and butchers stalls rub shoulders with nail bars and Thai cafes, whilst shoe shops are cheek by jowl with vaping supplies. 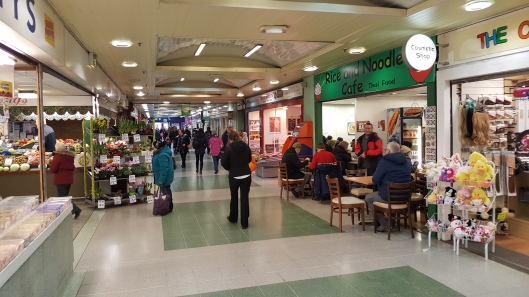 Thai food’s a popular option in a few markets in Yorkshire.

Unlike some towns, the number of empty shops hasn’t hit epidemic proportions, gutting. I passed several vacant properties which were being outfitted for new tenants, keeping the vibrancy of the centre alive. Long may that trend continue in these troubled times. Of course, there’s an irony in this. Without immigration, there’d be a damned sight more empty shops. A significant proportion of convenience stores are run by people from Europe or Asia – as are many restaurants and fast food outlets. How they’ll fare in a post-Brexit economy without freedom of movement is a question many would rather not ask… 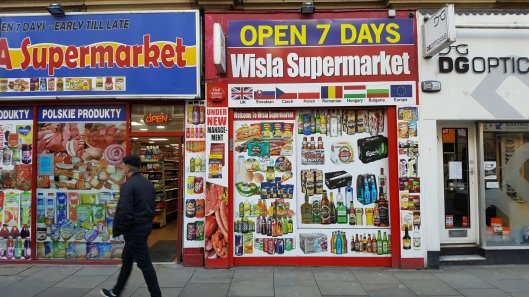 Whilst I was on my travels I popped into the station and found a cheese shop had set up store in readiness for the flood of homeward bound commuters. I normally visit on a Wednesday to purchase some of the artisan bread for sale, but I was sorely tempted to sample some of today’s wares. I have to be careful as my wife can’t eat cheese, so for me it’s a rare treat.

Now I’m back at work, where (as is often the case) my workload hasn’t gone to plan and I’ve been diverted into trawling my archives for a suitable cover for a magazine! Let’s see if I can come up with something suitable…