It’s a long time since I’ve done one of these, but I thought the award was merited this week due to complete spin and utter disregard for the facts by one Johnathan Pile, from Crofton* in Yorkshire, who is the Chairman of the grandly titled ‘Yorkshire Against Hs2’ (of course, Yorkshire’s nothing of the sort. Ed).

Pile has tweeted this load of fact free nonsense this morning. 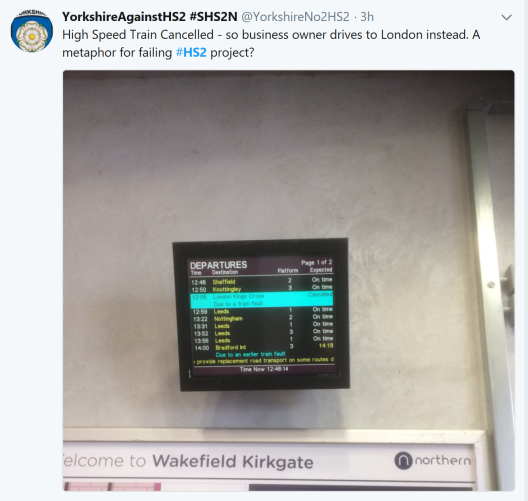 Let’s unpick this, shall we? Besmirching Virgin Trains East Coast’s reputation to claim they’ve cancelled trains due to the snow may sound clever, but Pile’s story fell apart by his own evidence. VTEC’s 12.55 from Wakefield KIRKGATE to London Kings Cross? I don’t think so…

VTEC run from Wakefield Westgate, not Kirkgate and the cancelled train is run by Grand Central. It was cancelled yesterday, but due to a technical issue with the trains traction equipment, not snow – as Grand Central tweeted.

Grand Central arranged for their tickets to be accepted on an East Midlands Trains service from Leeds. This ran and arrived in London St Pancras, just across the road from Kings Cross (on time) at 18.26 several hours after the GC service which was scheduled to arrive at 15.07. Of course, there were other alternatives. The next Grand Central service did run. It left Kirkgate at 16.02 and arrived in Kings Cross at 18.32 (18 mins late).

If Pile hadn’t already got a Grand Central specific ticket there was a VTEC service (the company he claimed was cancelling trains ‘cos of snow). leaving nearby Westgate at 13.18, giving him plenty of time to get a taxi across Wakefield to catch it. Here’s a copy of how VTEC’s services ran that day. None of the Kings Cross services were cancelled due to snow – or anything else – and timekeeping was pretty good.

So, why did Pile have to drive? he didn’t, the 12.55 was the only London train cancelled, all others ran. It was a Sunday and his meeting (by his own admission) appears to have been today, so he had plenty of time to get to London. Of course, that wouldn’t have made a tenuous ‘let’s try and bash Hs2’ story!

How long would it have taken him to drive yesterday anyway? Google maps calculates a journey made today would take between 3hr 43m – 4hr 6m to drive from Kirkgate to Kings Cross. As there was a lot of snow on the ground yesterday I’d suggest it would’ve taken longer and also been a pretty daft thing to do bearing in mind the weather conditions which were (allegedly) causing trains to be cancelled.

But that’s Hs2 antis all over – a cavalier attitude to facts and the truth. It seems that according to people like Pile, facts are what you make up. Is it any wonder their campaign’s fallen apart?

*Crofton is in the West Yorkshire constituency of Hemsworth. Despite Pile’s grand claims the anti Hs2 campaign isn’t exactly setting the constituency alight. I’ve had a look at the number of folk who’ve signed the latest Stop Hs2 Parliamentary petition. Here’s the result (updated today).

Of course, Pile has form for making grand claims and writing cheques he can’t cash. A year ago he was threatening that he’d start a Judicial Review against Hs2 (link). It was nothing more than bluster. His group never even started to raise the money to pay for one.