I’m kick-starting the new year with a bit of number-crunching and a look at the stophs2 campaign, which hasn’t had a great 2017 and which is set to have an even lousier 2018! their last remaining umbrella group (Stophs2) is hanging on by the skin of it’s teeth but if it survives the year in anything but name it’ll be a minor miracle. There’s really nothing going on.

The political campaign has skidded to a stop and apart from a few ineffectual protesters shuffling around the pavement at the Harvil Rd protest there’s very little happening on the ground. A few local action groups are trying to keep up local pressure, but as the number of signatures on the latest Stophs2 petition show, there’s not much support for them outside the small number of people directly affected by the Hs2 routes.

So, lets have a look at that petition. I’ve broken it down into phase 1 and the two legs to Manchester and Leeds. Here’s phase 1. 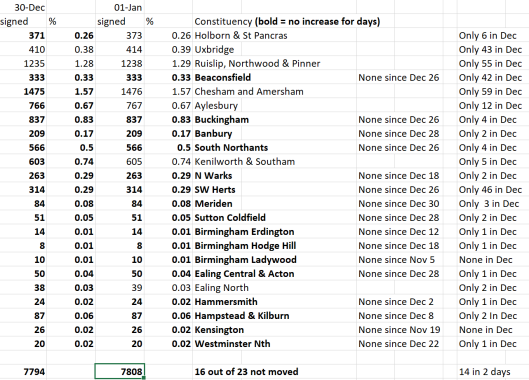 The numbers that are most significant are the percentages of all constituents who’ve signed. As you can see, they’re tiny, even in the campaign’s ‘heartlands’. Only two constituencies have more than 1%. What’s also significant is the numbers who’ve signed in December. None are in triple figures.

Of course, this petitions pretty pointless on phase 1 anyway as Hs2’s a done-deal here and it’s being built. Now let’s have a look at The leg to Manchester. 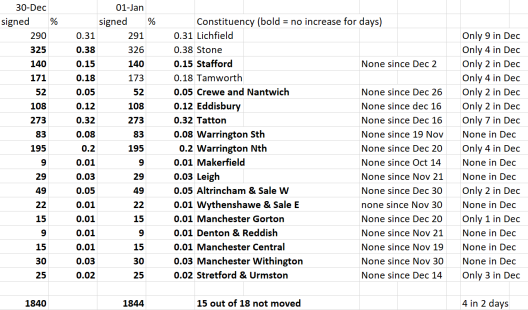 The figures here are appalling. 7 constituencies had no-one signing in December and the one’s that did get them never got into double figures! What this betrays is the lack of organised stophs2 ‘action’ groups on this stretch of Hs2. Apart from on in Mid-Cheshire and another around Stone, there’s bugger-all going on. No groups exist in Manchester at all. As the phase 2a Hybrid Bill is due to start its passage through Parliament this month it will be interesting to see how the lack of any organised opposition affects its progress.

Next up – the route to Leeds. 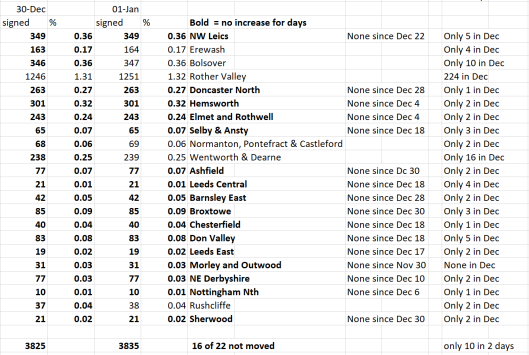 The numbers are little better here. Only 3 constituencies have got into double figures and the percentages are tiny. Only one stands out – Rother valley. But even here the percentage signing is still under 1.5% of constituents. Clearly, there are more ‘action’ groups here, but they’re not achieving much and they’re having no impact on a national scale.

Here’s some more number-crunching. This is the numbers of people signing the petition by month.

As you can see, the monthly average is dropping like a stone. The petition’s clearly doomed. It’s already more than 35,500 behind target. Put simply, they’re running out of Nimbys or those folks allied to groups opposed to Hs2 like the Green party of right-wing organisations like the TPA, IEA or what’s left of UKIP. In other words, they’re stuffed as they have no political clout.

There’s another interesting number too. Stophs2 claim 5901 followers on Twitter, so how many of those followers have retweeted and spread the petition? Just 94 in 96 days. So much for their social media campaign! 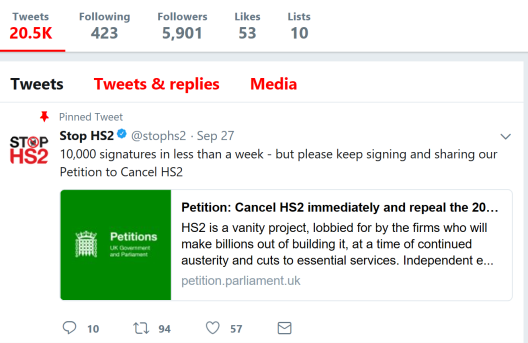 Notice the hollow boast about the number of people signing? Today (96 days later) they’re on 22,882! The story of apathy and inaction is the same on their Facebook page and website. They’ve run out of steam and support everywhere.

I can’t see The Dept of Transport or Government  being too worried about their campaign nowadays as it’s pretty much ceased to exist. Rent-a-quote Joe Rukin, their ‘grandly titled ‘Campaign Manager’ has been looking for a proper job for some time. If and when he goes the game’s up as Stophs2 is pretty much a one man & his dog operation. The group’s Chair, Penny Gaines, decamped to the South-West some years ago. In November 2017 Stophs2 lost two out of its five Directors, including Roger Waller who’d allowed his home address in Dunsmore, Aylesbury to be used as the groups registered office. The registered address has now moved to Rukin’s in Caesar Rd, Kenilworth (although Rukin resigned as a Director as long ago as January 2011). The remaining Directors are Gaines, Rae Sloan and Richard Lloyd – although how long they’ll hang on is anyone’s guess.

Somehow, I doubt I’ll be spending much time blogging about Stophs2 in future.