After four nights in Colombo we headed for Kandy and the cool of the hill country by taking a train from Fort station. We’d opted to catch the 10.35 which is worked by one of the New Chinese built S12 class DMU’s that were supplied in 2012. 13 of the units were purchased from CSR Sifang under a $101 million, 15yr credit line agreement with China. They’re similar to the UK HST’s in that they have a power car at each end, both fitted with a 1500bhp MTU 12V4000R41 engine.

Colombo Fort station is always a busy place. Here tourists mix with locals as they wait for the Kandy train.

As it was Dawn’s first journey in Sri Lanka I’d booked 1st class at 500 rupees each. Fort station was its usual busy self with a variety of Westerners and locals waiting for the Kandy train which arrived 15 minutes before departure time. As there were no seat numbers on the outside, most people were at the wrong end of the coach which produced the inevitable logjam in the middle of the car as people tried to fight their way through the aisle to the right end! The overall condition of the car was good. They’re fitted with twin sets of seats which rotate to face forward dependent on the direction of travel. Our seats were No’s 43-44 which faced a bulkhead. Legroom was reasonable and we had two small shelves mounted on the bulkhead in front. Rather surreally, two small TV screens played an Xmas themed ‘Home Alone’ film, although (mercifully) the angle of the screen meant we couldn’t see it properly. We departed Fort on time and & bumped & bashed our way out of Colombo. The problem with these push pull sets is 1st is right next to a power car. The power cars don’t seem to be set up very well which means there’s a lot of jerking & jolting. The coach has an attendant who stands in the vestibule. His job seems to be to lock the connecting doors & stop itinerants wandering in to 1st, as well as letting tourists out to wander up and down.

My impression of the countryside we traversed was that not a lot has changed in 12 years apart from the age of the road vehicles! The small towns we passed through didn’t appear to have expanded, so much of the journey was through lush rice paddies & coconut groves with surprisingly few people to be seen. We stopped at a variety of stations en-route. Mirigama has a large island platform controlled by an attractive old 3 storey, red painted signal box with a shingle roof. It operates a mixture of colour light and ground disc signals. The goods shed tracks appeared abandoned and there was an old hand crane still in situ, rusting gently. From there it was a short hop to Ambepussa where a few short wheelbase & bogie covered wagons sat in adjacent sidings, indicating rail freight still flowed here. The island platform was decorated with flower beds and a small Buddhist shrine. As we sped on I took time off to explore our train which contained a mix of Westerners of all ages and types, from retired couples to backpackers. Judging by overheard conversations both the UK & Germany were well represented in the mix.

As we started to leave the plains behind the scenery began to change. Hills started to encroach on the line and the power cars worked harder as we began to climb. Rice paddies give way to tropical woodland. After another jerky start from the little station at Alawwa I was glad no-one was serving hot drinks on board the train! Classic semaphore signalling made a comeback at the Colombo end of Polgahawela station which is the junction for lines to the North. It’s a large place as befits its status. The main station building straddles the tracks. There’s a disused loco shed and turntable, plus an active freight yard & attractive signalboxes.

After a succession of small stations, we arrived at Rambukkara, which has a collection of lovely lower quadrant lattice post semaphores. From here the line becomes single track & our train passed through a succession of tunnels & cuttings surrounded by jungle. The river we’d been following switched from right to the left as we climbed the steep valley side. Occasionally we glimpsed paddy fields in isolated areas where the valley widens enough to be cultivated.

The 10.35 to Kandy threads its way through the hills.

After a stop at the tiny station of Kadigamuwa (which rather soberingly, contains several wrecked coaches dumped by the lineside, presumably from the 2002 accident which killed 15 people) we encountered the best views yet, steep sided high hills, covered in forest, some of which was made up of massive old trees. We climbed continuously now (the line hits 1 in 44 on this section), every so often the views open out to give wonderful vistas across the valleys before another brief stop at Ihala Kotte which was another tiny, well cared for station festooned with plants of all shapes & sizes in a multitude of pots. Shortly afterwards a new peak swung into sight. Its topside was a sheer rock face that no life can cling to. In the distance, other oddly shaped hills that wouldn’t look out of place in America’s Monument valley could be seen through the haze. When the views were obscured by trees our attention swung to hunt for wildlife amongst the boughs. Sri Lanka has a rich variety of bird life, so you never know what you might see.

All too soon we arrived at Peradeniya, at 113km from Colombo it’s the junction for the line through the hills to Badulla and a fascinating station its own right. Fans of antique semaphore signals would love it as it has a fine collection of antique lower-quadrant signal gantries which are still in everyday use. There’s also a fuel depot here which brings regular trains of petrol tankers to the site. From here it’s only a short trip into Kandy station, which is another railway gem. Opened in 1867, it’s a mix of a Victorian station & Art Moderne building. It boasts 4 terminal platforms plus a one through route. Platform 1 is the through line for the Matale branch. 2 is a single track line with platform faces either side. 3 & 4 contain a loco release crossover and 5 is a shorter bay. the station has extensive sidings plus a two road loco shed and a covered road for wagon/coach repairs. There’s also a turntable which is in regular use for turning the Class W6 diesel hydraulics used on many hill country services so that they can run short nose first. The station is operated from a large signalbox fitted with a 68 lever Saxby & Farmer frame. This controls a fascinating array of lower quadrant signals on a variety of gantries. It’s like stepping back to the Victorian era, although I doubt the Victorians engineers would be impressed with the slackness of some of the signal wires, which means some of the signal arms appear barely ‘off’ when cleared! 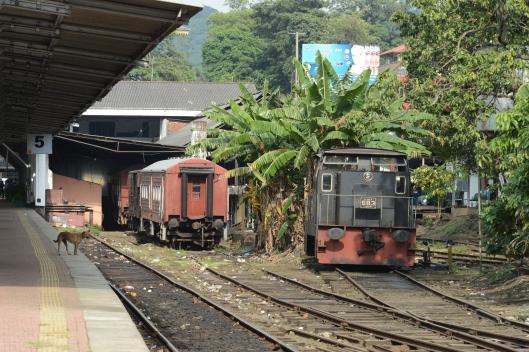 A look at the loco and carriage yard at Kandy. The shunter is Y Class No 683 which was built by Hunslet of Leeds.

Our arrival in Kandy was the end of this phase of our journey. I’ll talk about the town itself in part 3.

I’ve a small favour to ask…
If you enjoy reading this or any of the other blogs I’ve written, please click on an advert or two. You don’t have to buy anything you don’t want to of course – although if you did find something that tickled your fancy that would be fab! – but the revenue from them helps me to cover some of the cost of maintaining this site (which isn’t cheap and comes out of my own pocket). Remember, 99% of the pictures used in my blogs can be purchased as prints from my other website –  https://paulbigland.zenfolio.com/